Portugal’s Algarve is almost too popular, so why not head to its little-visited eastern end? Here the long white beaches are secluded and the port towns are sleepier, but there’s no shortage of gelato and pastry shops. On a road trip, Doug Wallace learns to slow down and live the good life 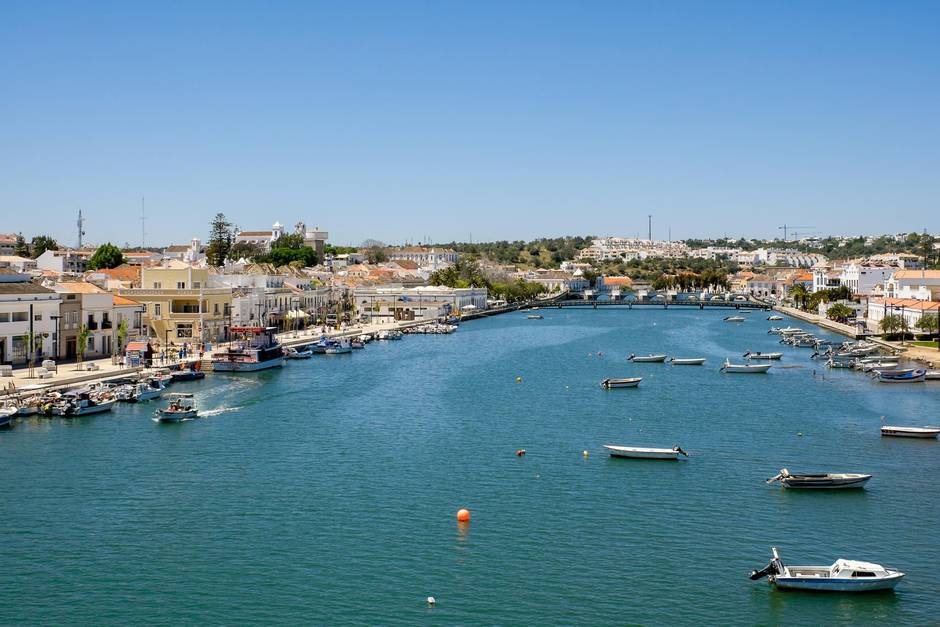 Tavira is one of the Eastern Algarve’s prettiest spots – and packed with gelato shops. (iStock)

Portugal’s beach-filled southern coastline has long been considered the country’s summer playground. And while the west side has enjoyed the lion’s share of the tourist trade since the 1970s, the east side, stretching from the central city of Faro to the Spanish border, is far more relaxing and infinitely more cool.

This is where the smarter Europeans are buying (and renting out) their summer properties, and where hip expats are opening boutique hotels and hot restaurants. The sleepiness of the tiny towns and empty beaches weeds out the people who can’t sit in a chair for more than 10 minutes. The common denominator here, for both locals and tourists, is an innate ability to appreciate life.

It’s easy to see why. Secluded beaches can stretch for many kilometres with no one in sight. Centuries-old towns – with their winding narrow walkways, whitewashed markets and village square cafés – are beyond quaint. Exquisite mosaic tile work is everywhere you look. Ditto ice cream shops. Traditional salt-cod fritters, octopus salad, seafood rice and the freshest bread are plentiful, tasty and inexpensive. Each bakery has its own unique recipe for the ubiquitous pastel de nata, or egg-custart tart, which makes repeat taste tests essential. And the wine is not only sublime, it can be had for as little as €2 a glass. Clearly, these people know how to live.

The hub city of Faro separates the Eastern and Western Algarve. Travellers fly into its small but busy international airport – and then promptly leave town. As a result, Faro’s pretty spots seldom make it into the guidebooks. There’s a lot of history here, and a visit to the Arco da Vila Interpretation Centre, built within one of the city’s oldest Moorish gates dating from the 11th century, provides visitors with the basics. This national monument also fully documents the devastating 1755 earthquake and its aftermath, and the rebuilding of the city. 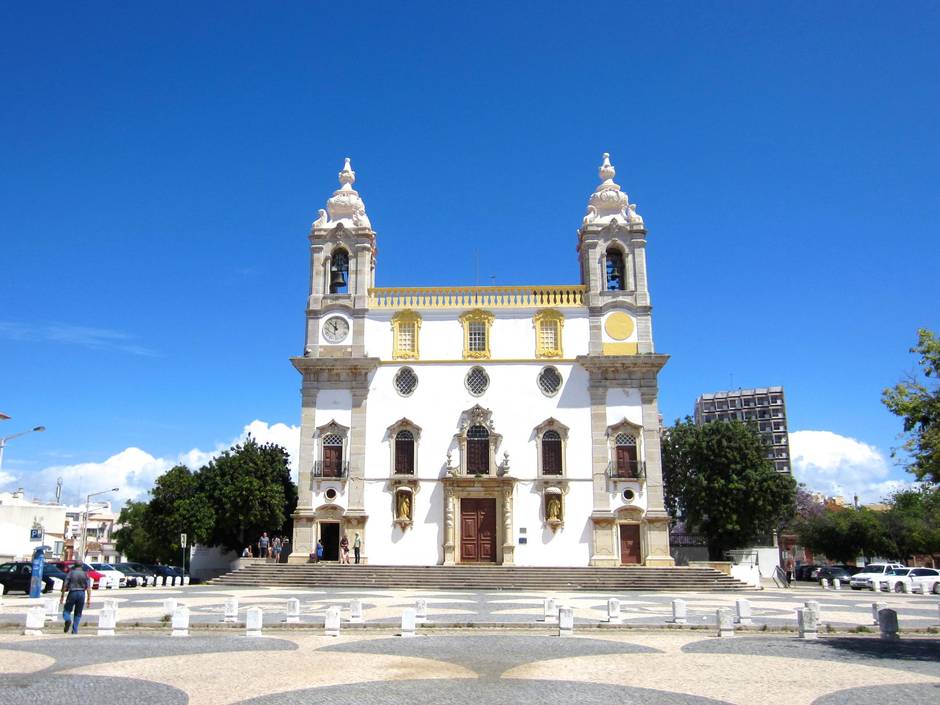 Church of Nossa Senhora do Carmo is remarkable for its chapel in the rear, its walls and ceilings lined with the skulls and bones of the monks who once served there. (Tim Stewart)

From there, you can pop into nearby Faro Cathedral, but perhaps more intriguing is the Church of Nossa Senhora do Carmo. It is noteworthy for its remarkable gilded interior and for the chilling chapel in the rear, its walls and ceilings lined with the skulls and bones of more than 1,000 monks who once served there.

The town of Olhao, just a 20-minute drive east, is the hip part of the region, more of a suburb really, and technically a municipality. This busy fishing port has slowly been adopted by artists and creative people over the years, drawn to its no-nonsense grittiness, and to the mix of old and new. Boutique hotel developments mingle with mom-and-pop restaurants on intricately tiled pedestrian streets. Look up and you’ll see huge white storks from the nearby salt marshes nesting on the tops of church towers; great big lumbering things like something out of The Flintstones. 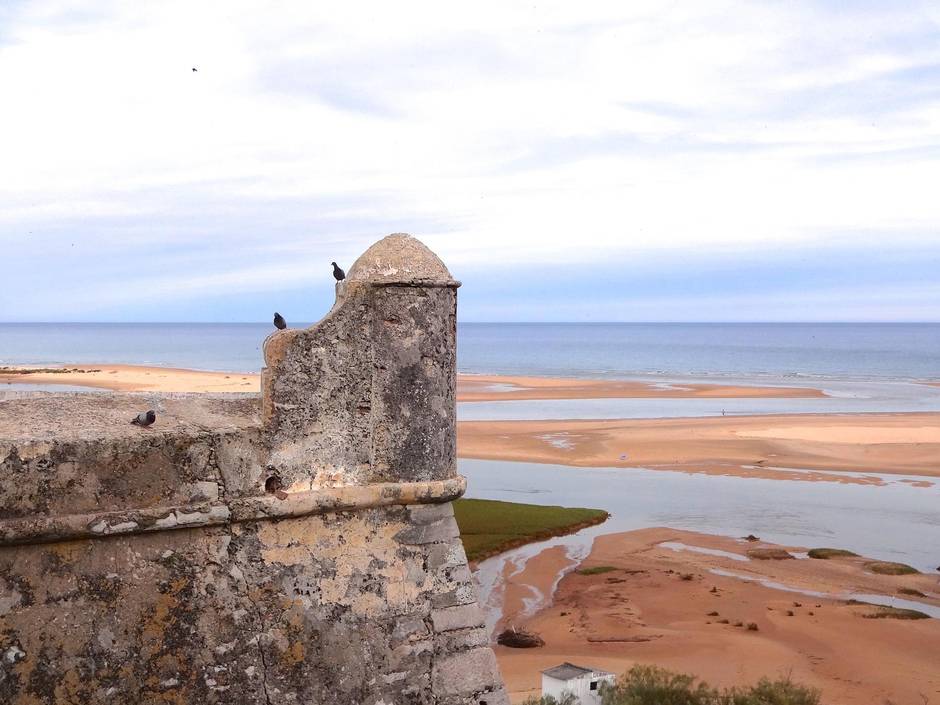 Near Tavira is the ancient Moorish fishing village of Cacela Velha, where locals frequent a favourite beach.(Tim Stewart)

Here, as you’ll find throughout the Algarve, smart, renovated buildings border total derelict properties, either abandoned or waiting for some long-lost cousin to reclaim them. This juxtaposition creates a sort of romantic, tumbledown-chic that underscores Olhao’s history, linking past to present.

A short ferry ride from Olhao to the marshes directly south of town will land you at Culatra Island, the first of the beachy sandbar islands that stretch eastward, all the way to the Spanish border and beyond. Once you get hooked on these incredible beaches, you’ll need a daily fix, and there is ample opportunity to beach hop to a different one every day.

Lufthansa and Air Canada Rouge have non-stop flights from Toronto to Lisbon, and Air Transat flies non-stop from Toronto and Montreal. From there, TAP Portugal will get you down to Faro in 45 minutes for about $275. The train is also an option. Driving from Lisbon on the toll highways is easy and less crowded than the regular highways. Rentals come fitted with e-toll transponders.

In Olhao’s Ria Formosa National Park, the modest but modern Casa Modesta sports a spartan architectural theme, designed more like a traditional family home than an inn. It has nine rooms, a garden pool and amazing views from the rooftop terrace. Rooms from $130; casamodesta.pt

Convento is a whitewashed haven in the centre of Olhao, a former convent where dorms have been converted into airy bedrooms with marble-finished bathrooms. Rooms from $165; conventoolhao.com

The 77-room Ozadi Tavira Hotel was built in the 1970s and renovated in 2014 to maintain the original character. On-trend colours, cork design details and local traditional homeware blend perfectly into the mod vibe. Rooms from $80; ozaditavirahotel.com

Further out in the countryside near Tavira sits Pensao Agricola. This six-room, all-white rural retreat has a quirky farmhouse feel, filled with gorgeous vintage finds that you will want to take home. Rooms from $190; pensaoagricola.com

Take a 15-minute drive a little further up the coast for a stop at Barril Beach on Tavira Island. It’s a former tuna fishermen’s camp, reached by walking from the mainland (where you’ll leave your car) across a pontoon bridge, then hopping on a small train that wends its way through marshland and sand dunes to the Atlantic. You will have no problem finding solitude here: This beach is 11 kilometres long. A cluster of bars and restaurants provides a bit of a respite from the surf and sun tanning, and a photogenic anchor graveyard commemorates the region’s fishing history.

Keep your camera ready for the city of Tavira itself, one of the Eastern Algarve’s prettiest spots and a popular home base for visitors. White stone-tiled streets, worn smooth by centuries of feet, line the narrow pathways, grand boulevards and picturesque church squares. Happily, it feels like there’s a gelato shop every 10 metres.

One of the many day trips to slot in while you’re in or around Tavira is the ancient Moorish fishing village of Cacela Velha just a few minutes’ drive further east. There’s a favourite local beach here where bathers walk or wade out to the sand bars, keeping an eye on the time so they don’t get stranded when the tide comes in. There are no public amenities on the beach but there are a couple of really good restaurants in the tiny town itself, including a fresh oyster café.

Keep in mind that, throughout the Algarve, lunch is sacrosanct, and always served between 1 and 3. (Many of the smaller shops close during this time as well.) If you try and eat later or earlier, you will be met with a shrug.

If you head further east and reach the town of Vila Real de Santo Antonio you’re at the Guadiana River, with Spain on the other side. Built in less than six months in 1774 as a centre for tuna fishing, it is now filled with travellers, its streets lined with tranquil cafés and craft-filled markets. Steer clear of the fridge magnets and the beach towels sporting the mug of soccer star Cristiano Ronaldo, it’s the local specialities such as cork home furnishings, ceramic bowls and tiles, terra cotta cookware, wool rugs and fine-milled soaps you should bring home. 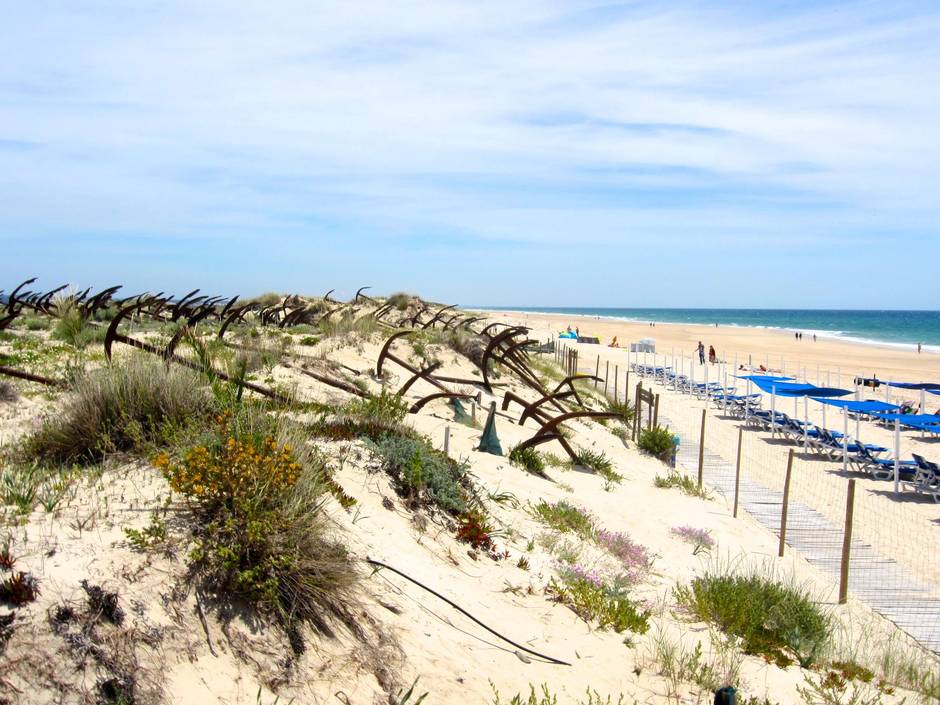 (Golfers should also head for the nearby Monte Rei Golf and Country Club just north of Vila Real. It was ranked earlier this year by Golf Digest magazine as the No. 1 course in the country. Designed by Jack Nicklaus, it blends into the landscape, with views of the Serra do Caldeirao mountains to the north and the ocean to the south.)

And since your quest on this trip is to learn how to fully appreciate the good life, why not head into Spain for a bite? Just hop on the 20-minute ferry across the Guadiana to Ayamonte for a tapas lunch and a jug of sangria. Just remember there is a one-hour time difference, and a similar outlook on respecting lunch times. 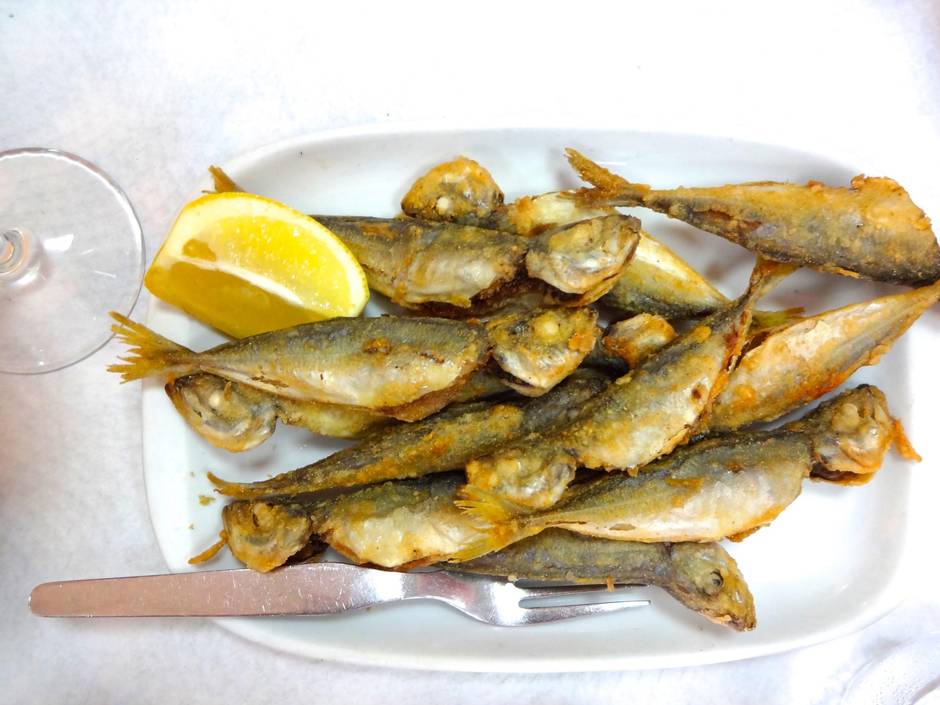 The area features tranquil cafés and restaurants, where you can feast on delectable meals, such as fried mackerel. (Tim Stewart)

Before heading back to your home base in Tavira, take a quick detour into the tiny town of Castro Marim to wander through the 12th-century castle ruins. Chances are good you will be the only one there. And as this is the centre of sea salt production in the Eastern Algarve, see if the open-air mud bath is open. Nestled right in the salt pans, it’s more of a wallow than a bath, but a great chance to “take the waters.”

Salt, sand and sitting around eating custard tarts: in the Eastern Algarve I found myself exhausted by doing absolutely nothing. Not a bad way to appreciate the good life.