Half the fun of touring Switzerland is simply getting around on its altitude-defying transport systems. Alpine trains cross tongue-bitingly high viaducts and burrow through spiral tunnels blasted into mountainsides. Cog railways claw their way up vertiginous slopes. Gondolas, cable cars and urban funiculars transcend gravity. And in Zermatt, at the foot of the Matterhorn, battery-powered shuttles whisk guests to hotels with barely a whisper.

In 1966, citizens here voted to ban internal combustion cars and trucks, except for emergency vehicles. It was a wise display of vision. Locals call Zermatt a village, but it has since burgeoned into a major ski resort town accommodating 35,000 at peak periods. Narrow streets are wedged between precipitous slopes. With conventional cars, "traffic would be deadly," explains Amadé Perrig, who co-ordinated the hotels, cable cars and other infrastructure for 25 years. Instead, all visitors arrive by train. Those in cars must park five kilometres down the valley and roll their luggage onto a special shuttle train.

I arrived on a mild May afternoon. The mountain air was fresh and clean. Fit-looking folks sporting North Face parkas and Patagonia vests strolled the main street, eating ice cream cones and window-shopping while passing by countless chalet roofs and gingerbread balconies. The old town is simply enchanting, with robust houses built of squared-off, time-blackened logs that sag slightly under the weight of centuries.

The next day, I took an electric taxi to a spacious garage/workshop to meet Bruno Imboden, who has designed, built and maintained electric vehicles for 27 years. A handful of mechanics in coveralls tinkered with older models; others worked on completing new ones. Each vehicle was a one-off of welded aluminum, designed to a customer's special needs and powered by lead-acid batteries. One charge lasts most drivers a full day; they plug in the vehicle and power it up overnight. Taxis, which stop-and-go all day without time for a break, need their batteries switched out after about five hours. Each automobile costs more than $100,000 (U.S.) and lasts 30 to 40 years.

Imboden showed off a new hotel shuttle, a light pickup, a heavy truck for building materials and a 70-passenger bus he had built. Its 96-volt battery bank, weighing 1,800 kilograms, had been removed by a tiny electric fork lift. "What we build is handmade quality," he said proudly. It has to be. "Winters here are hard on vehicles, with snow and slush, ruts and potholes."

His family had driven horse-drawn carriages for years. As the village grew, his father bought an electric car, built near Zurich, and put the first electric taxi on the roads of Zermatt in 1977. But he faced opposition. After a referendum that year, electric vehicles were allowed only at night, to relieve the burden on over-worked horses. Soon, more carriage drivers wanted electric cars. A second vote just a year later approved their all-day operation. Then, "the electric vehicle thing just exploded," Imboden said.

To limit congestion, private individuals cannot own electric cars. About 500 taxis, shuttles and service vehicles are licensed, all for business use; new permits must be justified. Today, Imboden's brother has the last horse taxi, while two hotels also run horse-drawn carriages.

That afternoon, I boarded a cog railway that has been electrified since 1898. Teeth on its wheels meshed with teeth on the track, carrying passengers smoothly skyward, up the 3,135-metre-high Gornergrat. I hoped for good views of the Matterhorn, but it was socked in. I waited over coffee at the mountaintop hotel for the clouds to clear. Instead, it began to snow. Later, back down in Zermatt, I finally got brief glimpses of the iconic peak, which still attracts some 2,000 climbers a year.

On my final day, I strolled across the narrow Vispa river, which bisects Zermatt. While standing on a narrow bridge, not paying attention, I was nearly run down by an electric shuttle – it came up behind me so silently. In the old town, a pickup was parked outside a house, a charging panel and cord conveniently mounted on the wall.

I thought a lot about those electric cars. How quiet. How reliable. How clean and green. It was almost enough to make me buy one. What a souvenir that would be. Even better than a Swiss Army knife.

Stretch out at this roomy Swiss ski hotel (plus your very own fireplace)
March 14, 2014 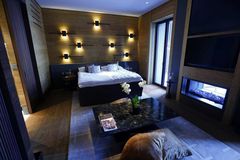 The lighter side of Swiss service
November 22, 2014 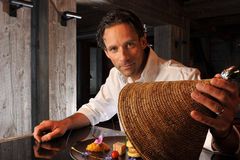 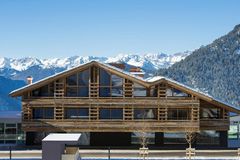