The wind shook the ski lift like a baby's rattle; the sky above the Alps glowed an eerie orange, signalling a coming snowstorm. Even my fleece-lined gloves could not stop the -20 C temperature from starting to frost my fingertips.

In other words, it was time for lunch.

Inside the mountaintop lodge, the air warmed with the convivial sounds of survival. People tumbled in, laughing as they peeled off jackets and hats. Goulash, spaghetti Bolognese and polenta steamed on trays. The multicultural mix of food made me think of a statistic I'd read: More than half of the residents here in the Valle d'Aosta – the slice of the Italian Alps tucked between Piedmont, Switzerland and France – speak both Italian, French, the local patois.

A man in a chef's hat emerged from the kitchen to hand out oven-fresh pizza and pour glasses of wine. I raised my eyebrows. I've learned that in most ski lodges, not even soggy French fries come for free.

"Non male per pranzo, eh?" I said to one of the other skiers. Not bad for a midday meal.

"Ah, but it's not lunch. It's aperitivo – happy hour!" he said, laughing, and passed me a plate.

I was growing to love Breuil-Cervinia.

The Italian resort, my home for two months, boasts 160 kilometres of downhill ski runs, 19 lifts and, most iconically, the Matterhorn, the 4,478-metre-tall, pyramid-shaped glacier that has come to symbolize the Alps. The Matterhorn, like so much else here, has a mixed heritage: While Italians call it Monte Cervino, its more common name comes from its Swiss side. Similarly, Zermatt – the Swiss ski resort linked by trails to Cervinia – is far better known than its Italian counterpart.

That under-the-radar sense is, of course, the charm of Cervinia – and of the whole Valle d'Aosta, Italy's smallest, least populous and most underrated region.

In summer, the Valle d'Aosta is a hiker's paradise; in winter, with its 20 different ski resorts, a snow lover's. Just half the size of Prince Edward Island, the area hosts some of Europe's highest peaks. Monte Bianco (better known by its French name, Mont Blanc), at 4,810 metres, clocks in as the tallest in the Alps. But even at the height of the season, you might find yourself alone on a trail.

But the area is about more than spectacular scenery. Its history stretches back more than two millennia. Rome's first emperor, Augustus, built up the region's main town, Aosta, and today it features some of northern Italy's best-preserved Roman ruins.

Six-metre-tall walls, broken by first-century gates and towers, surround the town. Inside lie the remains of the forum, including a Roman theatre with a 22-metre facade.

After the Romans, the Valle d'Aosta changed hands many times: The Goths, Lombards, Burgundians and Franks all had a turn in power. The turbulent history left behind no fewer than 86 different castles and towers, most of them medieval.

More than once during my stay, I marvelled that the region has not turned its abundant attractions into tourist traps. Instead, postcard-perfect experiences are simply a part of life. Take being dragged, on skis, to the top of a trail by a farmer on a snowmobile after enjoying a meal at his agriturismo. Or watching a priest bless barking dogs and whinnying horses in Aosta's piazzas on the Feast Day of St. Anthony. Or wandering through the stalls of more than 1,000 artisans at the Fiera di Sant'Orso – this year in its 1,014th edition.

On the last night of Carnevale in February, I attended a banquet at the 14th-century castle of Verrès. It was the stuff of travellers' dreams. Trumpeters in medieval garb welcomed each guest, many of whom were also elaborately costumed. Dinner, eaten under the wavy-glass windowpanes of the grand hall, included course after course of traditional cuisine. And yet, judging from the friendly greetings that passed around us, my companion and I were the only tourists out of the several hundred people in attendance.

At the ski resort Cervinia, of course, we were far from the only visitors. Still, the town felt laid-back and local. Compared with Zermatt, the lift lines were shorter, accommodation cheaper, food more authentic. Even after a morning of playing in the powder chutes on the Zermatt side, I'd come back to Cervinia for lunch, where a home-cooked tagliatelle al ragu at a lodge cost €8 (almost $12). In Zermatt, I once spent €9 on a large bottle of water.

Most mornings, I took the gondola 600 metres up for breakfast at Pousset, the Alpine lodge on Cervinia's most famous trail, il Ventina. The young Italian women working there always rang out with a cheery "Buongiorno!" before serving up cake and cappuccino.

One day, we happened to board the gondola at the same time. Each one, I noticed, carried huge boxes. At the top, they piled the boxes on a snowmobile; two strapped on skis and backpacks, while the third zoomed off.

All of those treats and bags of coffee, I realized with a start, had to be brought to the lodge by hand. There are no cars at 2,800 metres.

Living in the Alps is not easy. But I knew then that, when it comes to the Valle d'Aosta, leaving would be even harder.

The closest airports are Milan Malpensa and Turin-Caselle. Transfers by coach, taxi or car rental can be arranged. cervinia.it

Regulars know to pace themselves at Agriturismo Le Famille, where the fixed-price, €20 ($28) menu includes unending plates of hearty valdostana specialties, made from the farm's own products. Loc. Les Iles, Brissogne; 0165 762082

Ski down for lunch at La Pera Doussa to enjoy a home-cooked meal in an Alpine chalet – and then hold onto your hat for take the snowmobile lift back up. Valtournenche

At the restaurant at Principe delle Nevi, tuck into high-end, creative cuisine such as Piemontese veal with caramelized pears and Barbera d'Asti wine sauce. Cervinia; principedellenevi.com

In the shadow of Mont Blanc, the stylish Au Coeur des Neiges combines the best of Alpine tradition and modern luxury. From €180 ($252)

The Rascard Frantze in Champoluc is a 1721 stone chalet that could not be more off the beaten path: Guests can arrive only by foot or skis. In return, they get beautiful views, exquisitely designed rooms and absolute tranquillity. From €82 ($115)

Located in the heart of Cervinia, Le Samovar Guest House provides spacious rooms, friendly staff and easy access to the mountain. From €120 ($168); samovarcervinia.com. 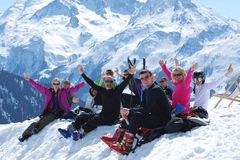