Mention the south of France as your next vacation spot, and expect to hear rhapsodic accounts of the Côte d'Azur's holy trinity: Nice, Cannes and St. Tropez. In the half-century since Brigitte Bardot staked her claim in St. Tropez, the French Riviera has served as a seaside playground for the rich and famous, and a magnet for sun-seeking travellers looking to join the party.

But there's a hefty admission fee for rubbing Prada-clad elbows with the yacht set, and for those of us travelling on something resembling a budget, the price tag associated with Cannes and Monaco inspires a search for an undiscovered stretch of shore. The answer begins a couple of hours' drive away, in Marseilles.

France's gritty, unloved second city seems an unlikely gateway to coastal bliss. But while Marseilles is enjoying a renaissance in its own right among young French, its real treasure lies in the unspoiled Mediterranean coastline nearby, between the city and the better-known Cote D'Azur farther east. After leaving the airport, within 20 minutes' drive we are free of the city's grip and hurtling toward a series of imposing limestone cliffs. A vertigo-inducing descent on the hairpin turns of the D559 announces our arrival in Cassis. We find only a passing mention in many guidebooks of this picturesque, terra cotta-roofed fishing town, an omission that no doubt suits the crowds of Marseillais who flock here for holidays in July and August.

Life in Cassis centres on an old port that could easily be mistaken for St. Tropez, except for its relaxed air. Nestled under the eye of a dramatic medieval clifftop castle, patios line the water's edge, serving the catch of the day paired with a bottle of flinty white wine from the patchwork of vineyards that punctuate the town's hilly terrain. Locals run down the clock until sundown with a spirited game of boules on the seaside court. I quickly forget what day it is.

There are some perfectly adequate beaches to be lounged upon here, but supernatural splendour awaits in the Calanques, a series of finger-like inlets carved into pine-topped limestone cliffs. These French versions of fjords are anything but mundane, hiding vivid turquoise pools and tiny beaches accessible only by foot or small boat. Those adventurous enough to take the treacherous hour-and-a-half hike from Cassis to En Vau and Le Sugiton, the prettiest of the Calanques, are rewarded with an idyllic platform for sunbathing and swimming.

Not in the mood for scrambling down cliff faces in deck shoes, we elect to explore the Calanques in style aboard a private sailboat. This would be a bank-breaking proposition an hour east on the Côte d'Azur, but we find a day-long charter on a 40-foot sailing yacht in Cassis for the absurd price of 50 euros ($81) per person. Our captain, a convivial ex-Parisian executive named Dominique, knows he could charge more, but he doesn't seem to care.

Dominique pilots us in and out of the Calanques, where French holidayers laze in the sun and plunge into the pristine waters from the rocky outcroppings above. Late in the afternoon, we drop anchor in an uninhabited island cove, and for a moment, it's as though we have the entire coast to ourselves. Our only competition for this spot, the nudist occupants of a small motorboat, soon drive off - still naked - into the waning afternoon sun, tanned rears indifferent to prying eyes.

After a day's exposure to sun and sea, we have just enough energy to make the 20-minute walk up to our boutique bed and breakfast. The decision to forgo a generic seaside hotel pays off as we enter the gates of Maison No. 9. Down a rural laneway just beyond the buzz of the old town, the ochre façade of an old Provencal abode fronts a luxurious country sanctuary with four gorgeously renovated suites and an infinity pool looking out over the distant cliffs. It's a far cry from budget accommodation, but is a completely defensible splurge: A Cannes equivalent runs almost double the price.

The next morning, we linger over a sumptuous breakfast, monitoring the beat-up old tractor puttering up and down the vineyard paths next door. A brisk 45-minute drive through Toulon leaves us just above the coast in the old city of Hyères. A getaway for English high society in the 19th century, Hyères was a Riviera resort before such a thing ever existed, hosting eminent visitors such as Queen Victoria and Tolstoy. They have long moved on, but the city quietly retained its trend-setting status.

Perched on top of the old medieval town, the Villa Noailles sticks out like a cubist's rendering of a sore thumb. The early modernist house, built in 1923 by a pair of moneyed bohemians, is now the focal point of Hyères's renowned art scene. Even if you miss the city's International Fashion and Photography Festival held each April, the avant-garde exhibits remain on display at the villa into the summer, creating a mini-MoMA in an unlikely locale.

While fashion and design insiders flock to the old city, Hyères's southern peninsula earns a devoted following for the golden sand beaches of the Île de Porquerolles. We make the 15-minute ferry trip on a Thursday, hoping to beat the weekend crowds to the island's placid waters. The French government has other plans for us. Our arrival happens to coincide with an extended national holiday, one that seems to require all able-bodied citizens to descend en masse on the nearest beach. That the nearest beach is a two-kilometre walk from the port (the island, a national park, is car-free) is no deterrent, and the competition for a patch of sand is fierce until the sun descends.

A somewhat more tranquil option beckons from the small port of Le Brusc on the other side of Toulon. From here, Les Embiez is a quick ferry away. Purchased in 1958 by the late Paul Ricard (who invented and commercialized the eponymous Provençal pastis), Les Embiez is far less rambunctious than you would expect for an island owned by a legendary liquor magnate. Don't be fooled by the pretty toy port lined with sailing yachts - the majority of the rugged island's population is made up of goats. Still, 10 hectares of vineyards, secluded beaches and a bargain-priced aquarium provide ample fodder for a day trip, with a boutique guest house as backup in case you're seduced by the languid pace.

We soon find ourselves back in Marseilles, but only because our plane reservations demand it. With unheralded gems waiting to be discovered along the southern coast, it's tempting to follow the lead of our boat captain Dominique and take up permanent residence. It's not a daydream we can act on right now, but this time the credit-card bills waiting at home provide some rare encouragement: We can afford to come back.

GETTING THERE Air Transat offers direct flights to Marseilles from Montreal and Toronto. 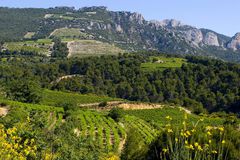