Looking out upon the Chocolate Hills of Bohol, I knew that I was seeing a true wonder. The enormousness of the dimensions, the extraordinary remoteness, the fantastical oddness – it all did not seem real.

Fresh off a trip to the Banaue Rice Terraces, I saw a photo of the hills in the window of a Manila tourism office.

Making a spur of the moment decision, I booked a plane ticket to Tagbilaran, the capital of Bohol province, on an island about a little more than an hour flight away.

From there it was a matter of finding a bus to Carmen, a town of about 45,000 located almost exactly in the centre of the island.

As the road climbed upward, I found myself deep in the heart of a broad plateau, where rolling limestone hills competed with flat rice paddies for my attention.

Then, rather suddenly, there they were: huge conical hills rising up from the edge of a wet, green landscape.

I had first viewed the hills from the window of my airplane. From above, it appeared the Earth had broken out in tiny goosebumps. It was impressive, but nothing compared with seeing them up close.

My first thought was how unbelievably alien the hills looked. They were both massive and compact; towering, yet perfectly round. Their near-vertical sides rise up into the sky only to taper into perfect cones and domes.

Each was different, but they all seemed to share the same charming proportions and uncanny symmetry. They looked almost artificial, too perfect to be the product of erosion and time.

The bus let me off near the government-run Chocolate Hills Complex. Perched atop one of the larger hills, it housed a restaurant and a well-placed observation deck.

I spent the next few hours in silent awe, watching as the tropical sun and rolling white clouds conspired to bathe the gumdrop hills in waves of light and shadow. (The name Chocolate Hills comes from the brown colour the sun-burnt cogon grass takes in summer.) Below me, a village of thatched Nipa huts clustered by the feet of one colossal mound, the houses looking cheerful and oblivious in its massive shadow.

In my opinion, a wonder is a place so unique that a traveller can search for the rest of his life and never find another like it.

It is a place that makes you doubt that what you are seeing is real: Never in my wildest imaginations had I thought it geologically possible for a landscape to look so strange as this one. As I stood there, looking out upon that impossible panorama of stark and beautiful contrasts, I found myself pondering whether these might be the only such hills in all the universe – and contemplating what other wonders lay unknown to us still.

What it is: The Chocolate Hills are thought to have been formed as uplifted marine limestone was cracked by tectonic movements and then weathered away by water and wind. More than 1,300 individual hills cover more than 50 square kilometres and range from 30 to 90 metres in height.

Where it is: In the centre of Bohol province in the Philippines, on one of the major islands of the Visayas.

How to get there: From Manila, fly to Tagbilaran Airport. Philippine Airlines or Cebu Pacific Airlines offer direct flights (around 70 minutes). If you are travelling through the Visayas, ferries running between Cebu City and Tagbilaran are frequent. Once in Tagbilaran, buses or taxis can take you to the interior of the island in a few hours depending on the route.

Where to stay: For a resort-style hotel, try the Chocolate Hills Adventure Park or the Sagbayan Peak mountaintop resort. The government-run Chocolate Hills Complex was severely damaged by the earthquake and is closed. For cheaper accommodations, small hotels and guest houses can be found in and around Carmen and Sagbayan ($10 to $50). For more info visit experiencephilippines.org.

Note: The 7.2 magnitude earthquake that struck the central Visayas in October, centred on the island of Bohol, caused widespread casualties and damages in an area where the economy is largely dependent on tourism. Though the Philippine Department of Tourism has declared the Chocolate Hills open for visitors, it is advisable to research and book ahead, and consider the plight of the people as they continue their efforts to rebuild and care for the displaced.

Spending Christmas in the Philippines: It's not home, but it's magical
December 22, 2012 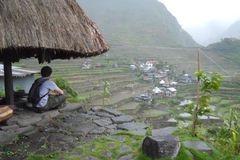