There’s a drama playing out here of a progressive city trying to save its soul.

Concierges in downtown San Francisco hotels have long warned visitors against the Tenderloin – don’t go there, just don’t – which is a shame because there’s something remarkable happening here. New businesses and attractions are opening at a breakneck pace. While the area is still a little rough, there are now schoolchildren on the streets and some money is flowing in, along with something else less tangible bubbling up: local pride of place.

Over the years, residents have fought hard to keep the Tenderloin an enclave that’s affordable for the lower and lower-middle classes – and some of their solutions have been innovative, perhaps even likely to hold as tech firms, such as Twitter and Zendesk, set up shop on the neighbourhood’s fringes. The Tenderloin has the highest percentage of housing in non-profit hands of any downtown neighbourhood in the United States, according to activist and local historian Randy Shaw, something he hopes will help to insulate it from gentrification, along with the fact that its historic buildings with tiny apartments aren’t exactly what the rising tech execs want.

In addition to its interesting present, what a past it has. Evocative vestiges of San Francisco’s history seem to hide out in the Tenderloin, ones that have largely been purged from the rest of the go-go city. The mid-century modern of Alfred Hitchock’s Vertigo? It’s here, in the area’s 409 historically designated buildings, all but one built after the 1906 earthquake levelled the area. The noir nightclubs of Dashiell Hammett? They’re here, too – atmospheric neon makes the night feel very Maltese Falcon.

“The Tenderloin was a jewel once,” local activist and tour guide Del Seymour says. “A place where people came from far and wide to gamble, to eat good food and drink, to have fun. If we make the right choices, the Tenderloin can be a jewel again.” 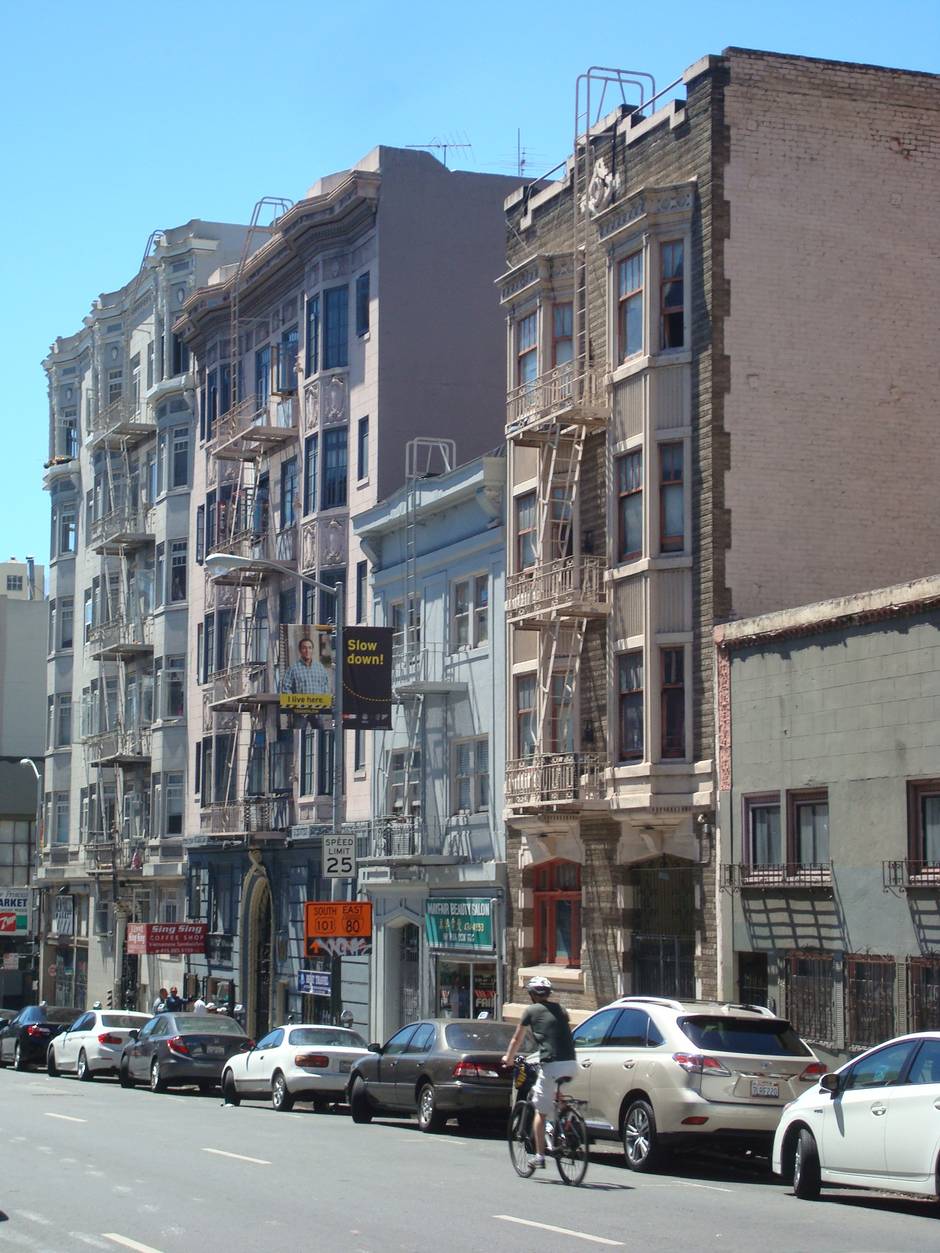 Over the years, residents have fought hard to keep the Tenderloin an enclave that’s affordable for the lower and lower-middle classes. (Alec Scott)

“Any city that doesn’t have a Tenderloin isn’t a city at all,” Herb Caen, San Francisco’s legendary columnist, once wrote, and the dictum is on stickers they give out once you’ve paid the admission at the brand new neighbourhood history museum.

Created at a cost of $3-million (U.S.), it occupies a corner between an old boxing gym where Jack Dempsey and Muhammad Ali once trained, and one of the residential hotels, with their SRO setups – single-room occupancy, shared bathroom, no kitchen.

The museum tells of how the Tenderloin became a distinctive area – how, after the 1906 quake and resulting fire, the city banned the single-family wooden houses that fill much of the rest of San Francisco, how officials zoned the neighbourhood for a density of high-rises.

The Tenderloin Museum runs a series of walking tours, and ours is led by Pam Coates, a long-term resident, a survivor, she says, of domestic abuse and a couple of years on the streets.

She shows us the next-door SRO, the Cadillac Hotel (1907), with its donated 1884 Steinway grand piano in the high lobby (“the concerts are open to the public – sometimes residents, sometimes pros – always a good time”).

We visit a new park, built by the city at a cost of $9.3-million, named for the saintly Franciscan Rev. Alfred Boeddeker, who long ago founded St. Anthony’s, a soup kitchen that serves nearly 3,000 meals a day. In the park, four teens hustle on the multi-coloured basketball court, the plants are drought-tolerant and the glass clubhouse offers Internet access and yoga classes.

A park worker hustles a man with a sleeping bag out of the fenced-in park’s one entrance. “Not here, man.” Coates walks us by St. Boniface Catholic Church, which allows the homeless to stay, and a non-profit where they can store their belongings. (“Everyone used to have shopping carts. No more.”)

Just around the corner is what locals call The Rock Star Hotel, the Phoenix, an old spiffed-up motor lodge with space for tour buses in the parking lot. It’s long hosted bands but had fallen on hard times before neophyte hotelier Chip Conley took it over in the mid-nineties. It became the first hotel of a small chain of mainly West Coast-based boutiques, Joie de Vivre. The place has an out-of-Palm Springs courtyard and a funky Asian-fusion brunch spot and bar, Chambers, with shelves full of old records lining the wall. 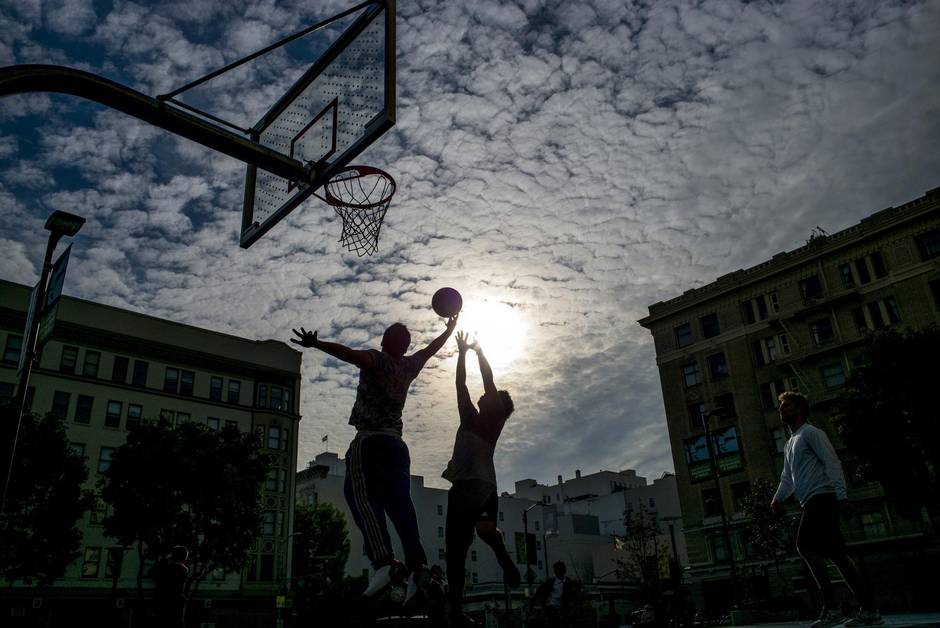 A new park, built by the city at a cost of $9.3-million (U.S.), was named for the saintly Franciscan Rev. Alfred Boeddeker. (David Paul Morris/Bloomberg)

Opposite the hotel entrance are two pedestals with marble Vietnamese lions snarling atop them, marking the entrance to the two blocks of Little Saigon, the first American home of many Vietnamese refugees who fled here after the Vietnam War – along with subsequent waves of Cambodians and Laotians.

The Tenderloin has given refuge to many over the years – and part of that is due to Glide Memorial Church, the largest private provider of social services in the city. At the Sunday service, a year to the day after Michael Brown was killed in Ferguson, Mo., there are searing images of the aftermath projected above the altar, while the choir sings gospel, “Do not pass me by, saviour.”

A parishioner tells his story to the congregation, of coming to San Francisco to come out into the Tenderloin’s relatively welcoming gay, black community (“God brought me here”), of falling into meth addiction, nearly dying of AIDS and then coming back from both. “They gave me six months to live in 1990 and it’s 2015 and I’m still here.”

The parishioner is one of many social outcasts who washed up here and started again. In the 1910s, the Tenderloin hosted single women, who, to the horror of social reformers, lived alone and often gathered together in cafés – without men! Three years before the Stonewall riots in New York City in 1969, the trans clients of Compton’s Cafeteria in the Tenderloin refused to be rousted by the police. “We fought,” a riot participant recalls in a documentary snippet on view at the museum. “There were sugar canisters going through the plate-glass windows. All of us were arrested, sent off in paddy wagons, but it was right.”

What is likely the country’s oldest gay bar, the rakish Gangway, is still operating here, with a morning as well as an evening happy hour. Where the Castro has gone corporate, more than a little bland, there’s still some of the original energy that made the city a gay-lib capital in the Tenderloin.

It’s at the Gangway that I meet Del Seymour for a museum-sponsored tour of the area’s nightlife. The Vietnam vet and former drug dealer turned himself around, worked on engineering projects around the world and now sits on the boards of an alphabet soup of service agencies. On our evening together, he looks sharp with a burgundy silk handkerchief poking from the pocket of his gabardine blazer. We pass an old apartment building with scaffolding out front – “Looks like we lost that one. They come with a briefcase full of bills, $15G, to offer tenants to move out.” The people at the arriviste tech companies sometimes consult with him to see what the neighbourhood wants: “Jobs,” he says. “Training. There’s talent here. We don’t want your day-old food.”

The first funky tune comes on, and two female friends get out on the floor, dancing close – the successors to those long-ago independent women.

Maybe there’s somewhere else to be this evening, somewhere even better than this, but somehow I doubt it. 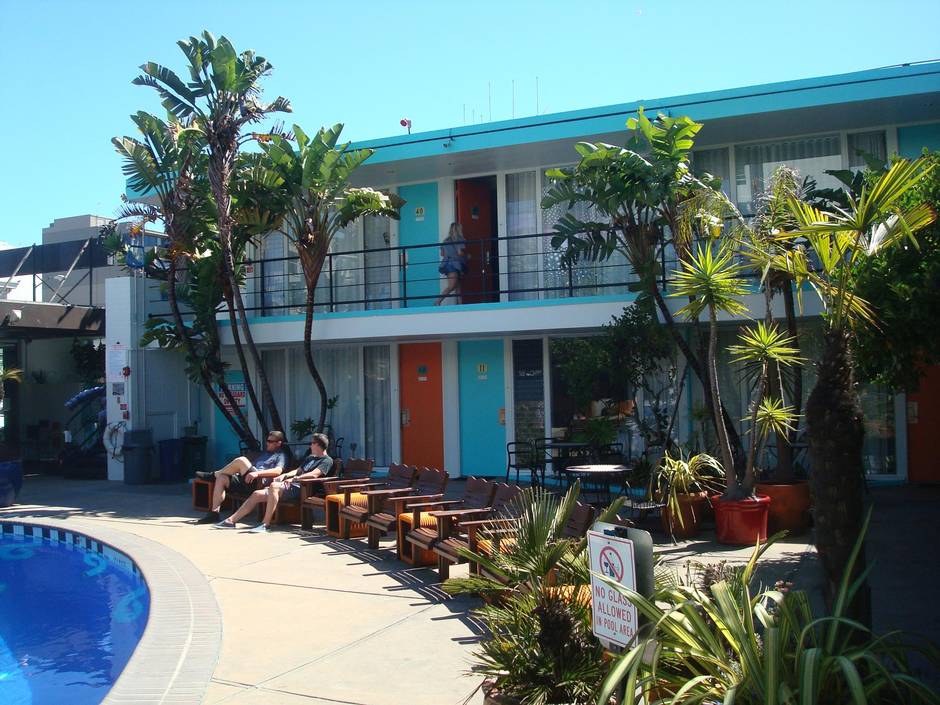 The Phoenix is a famous lodge with room for bands’ tour buses. (Alec Scott)

Farmer Brown: Jay and Deanna Foster have adapted the Southern and Creole recipes of their ancestors to the California setting, with fresh ingredients from (as the name suggests) small farms. Start with the barbecued baby-back ribs. 25 Mason St., 415-409-3276, farmerbrownsf.com

Huxley: The 25 seats at this charming, small-plates boite are always full because the three young owners left jobs at some of the city’s best restaurants to start it. 846 Geary St., 415-800-8223, huxleysf.com

The Market: A multirestaurant food hall in the base of the masterfully converted old Merchandise building where Twitter has set up shop – mainly, it serves the nearly 15,000 tech workers who have flooded the Tenderloin’s fringes. 1355 Market St., 415-767-5130, visitthemarket.com

Bourbon & Branch: A bar out of a Dashiell Hammett thriller, a multiroomed, postmillennial speakeasy, with passwords (obtainable from the bar’s website) a must for access. 501 Jones St., 415-346-1735, bourbonandbranch.com

The Magazine: This stylish shop, opened elsewhere in 1973, retails old issues of Life, Time and other more obscure titles, all of it giving some sense of the 20th century’s passing show. 920 Larkin St., 415-441-7737, themagazinesf.com

Boeddeker Park: Those with an interest in urban writer Jane Jacobs’s investigation of parks that do – and do not – work will want to guess at this new, innovative space’s future. 295 Eddy St., 415-834-9943

Tenderloin Museum: Opened this summer, the museum adeptly tells the sui generis neighbourhood’s story through multimedia exhibits about its past and walking tours through its present. $10, $15 with tour. 398 Eddie St., 415-351-1912, tenderloinmuseum.org