As we got closer, I saw little black lines on the highway, then some quick dark movements darting off the road into the grass. Then we arrived at the Narcisse Snake Dens, a Manitoba Wildlife Management Area. Snake dens in Canada? In fact, the greatest quantity of snakes in one place is not in Africa, Australia or Central America, but about an hour and a half north of Winnipeg.

Once parked, our guide led us on a short hike to the snake dens as the occasional red-sided garter snake slithered across our path. At one point, he swooped down and expertly picked up a specimen. It wriggled a little, then calmed down and looked at us placidly. About 40 centimetres long, black with a red stripe, he looked harmless, even a bit cuddly. The guide gently put it down and then we all peered over a wooden railing into a well-established cave about 4.5 metres below the path.

I could see only dark rocks, crevices in the earth and some vegetation. However, once my eyes got accustomed to the mottled light, the darkness came to life, and I could see a few hundred snakes wriggling around. Males, I learned, are the first to awaken from a long winter's hibernation. It's amazing watching these little guys who, after spending six months starving in those dark caves, come out so excited about mating. The boys were stretching their legs, so to speak, and eagerly awaiting the adult females, often three times their size.

Finally, a female slithered out of the cave and the males sprung into action. They pounced on her – with 10, 20, 50 or more males attacking from all directions. The female bravely tried to get away, up and out of the cave. But the males were relentless, forming writhing, moving mating balls of snake, with a lone female in the middle. Fifty or so excited snakes in a ball makes a very odd, sibilant rustling sound. Eventually mating occurred and the female was able to move along. After mating, the female emits a pheromone (like a diamond ring, for snakes) that keeps the other males away. Fortunately for the males, they have two hemipenes – snake penises – in case one breaks off in the commotion. (Ouch!) You can feel sorry for the females, but this rapacious behaviour is totally natural.

Narcisse sits between Lake Winnipeg and Lake Manitoba, two huge inland bodies of water. This area contains plenty of food and water for wildlife, but critically for these garters, vast underground limestone caves, ideal dens where the snakes can survive the long, cold Manitoba winters. The snakes traditionally emerge in late May, with the arrival of the welcoming Manitoba spring.

After visiting a few similar pits, we stopped at an unmarked site off a nearby dirt road where we met Robert Mason, a professor of zoology from Oregon State University, here with a few graduate students tagging snakes for study. Here, not hundreds but thousands upon thousands of snakes were cavorting. Massive snake balls writhed on ledges, tree limbs, on plants and on the ground. Some mating balls slowly oozed down rocks, others rolled in the grass. Some seemed as tangled as balls of twine. Professor Mason estimated that there were 35,000 snakes at one pit alone and more than 250,000 in the general area.

While we stood on a path between two snake pits (nicknamed the snake highway), dozens of red-sided garter snakes travelled back and forth from one den to another. Snakes moved right past us, sometimes going around or through our legs, sometimes stopping at our feet and giving us a long look before moving on. We watched as a healthy female raced by, chased by two frisky males, eager to rub their chins on her belly. (This reportedly gets her in the mood.)

My guide suggested that I go down into one of the pits to get a good close-up photo, but I respectfully declined.

Send your 600- to 800-word travel stories and photos to travel@globeandmail.com. 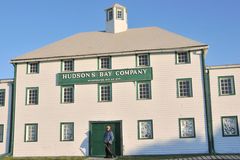 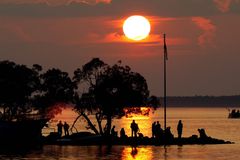