CHRISTINA NEWBERRY
PARIS
Contributed to The Globe and Mail
Published August 26, 2011 Updated May 3, 2018

Chartier restaurant in Paris is a classic. Opened in 1896, it serves traditional French food, without the pretension and high prices that generally seem to accompany French fare both in France and abroad. But food is not why one goes to Chartier. One goes for the dinner theatre that is the many waiters hustling food as fast as the kitchen can produce it, then tallying up the bill on the paper tablecloth; the long lineup of customers waiting to get in; and the strangers at your table – for at Chartier, one never dines alone.

On a recent trip to Paris, my boyfriend Ric and I decided to immerse ourselves in the Chartier experience. Knowing the lineups can be legendary, we set out early, only to find ourselves caught in a torrential downpour that forced us to take cover in a doorway. After 10 minutes or so, we realized that if we waited the weather out, we could be in that doorway all night. So, bravely (We are Vancouverites! We can do rain!) we made a mad dash down the street to Chartier, arriving at the door as drenched as naughty dogs that have been banned from the house.

Fortunately, we were still early enough to be seated right away. At Chartier, there are no intimate tables for two – guests are seated wherever there is room – so we were added to a table where two French ladies were just digging into their dinner. Not much liking the looks of the sodden tourists, they gave us a curt nod, then proceeded to pretend we did not exist. Not to worry – we would manage to get their attention. First, we needed wine.

Wine in hand, we tucked in to our first courses. Mine was oeuf dur mayonnaise – the French version of a devilled egg. Ric, having read good reviews of said oeuf , decided he wanted a bite. While moving the piece of egg across the table en route to his mouth, the egg splashed into Ric's glass of wine. That got the French ladies' attention. Giving him a stern look, the woman to his right, with great intensity, reached for her purse, picked it up, and moved it meaningfully to her other side. You could practically hear the mental " Mon Dieu!"

After our giggling subsided, we realized that Ric needed a new wine glass – one that was egg-free. In a restaurant where the waiters are not keen to speak English, nor known for their warm hospitality, we knew this would be a challenge. When our waiter came to the table, Ric handed him the glass. "It is bad?" The waiter asked. "No," I helpfully replied, pointing at the glass. " Un oeuf!" His eyes widening, the waiter took a closer look at the glass. Seeing that, indeed, it did contain un oeuf, he took it away, surely muttering about tourists as he went.

The rest of the meal went by without incident. The food was nothing to write home about, but we knew it wouldn't be. It was traditional French food from before French food went fancy.

It was cheap. It was pretty good. There was plenty of wine. But after the French ladies left, they never did seat anyone else at our table, despite the growing line outside. It must have been something we said. 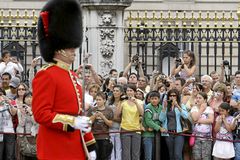 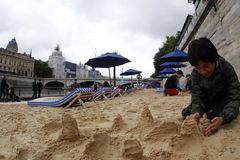