Firmly entrenched in Cuba's reputation as a travel destination are cheap resorts, flee-flowing rum and antique American cars, stubborn holdouts of an embargo-scarred nation. But in a country of stunted growth and steadfast determination, Cuba is earning praise as one of the easiest countries in the world to bike. All that's needed is a little endurance and an inclination to climb. As an avid urban cyclist, touring seemed a way to explore a country at my own pace, allow for chance encounters with average citizens and avoid the dreadful hop-on, hop-off ritual of most guided bus trips.

I chose to ride in Cuba at the tail-end of its rainy season, longing for another view of the country after my first visit six years ago, before imminent political upheaval takes its course and Americans eagerly put their stamp on the island country.

Bike touring isn't for visitors more inclined to sip mojitos at Varadero's resorts, or those who hope to brush past Ernest Hemingway's spirit in the touristy booze can La Bodeguita del Medio. Instead, biking to some of Cuba's relatively obscure beaches would offer me the opportunity to stretch my legs before stretching out on the sand.

I'd already spent a week biking with a group in a G Adventures tour and seen the limestone mogotes in the western Vinales Valley. I wanted another week for a solo adventure in the east. To cover as much ground as possible in that span, I elected on a couple of day trips that rimmed the coast.

I planned my jaunt over a distinctly Baracoan lunch: a delightful pulpo en Bacan (octopus stewed in coconut milk with cilantro and a bija, or annatto, paste that gives it a reddish hue) and canchachara, a white rum cocktail with a honey foundation underneath a mound of ice.

I would start here in Baracoa, the country's most eastern city, and travel 35 kilometres to Boca de Yumuri, a sleepy fishing village split by its namesake river and flanked by an imposing, picturesque canyon.

My proposed route is a tranquil contrast to the traffic along one of Cuba's busiest streets, Havana's Paseo de Marti: gone is the incessant rush of auto rickshaws, three-wheel pedal bike taxis, horse carriages, pre-revolution Yankee-mobiles, modern import sedans and buses that all pass within seconds of each other.

At 9 a.m., it's already hot when I hop on the bike I've borrowed by way of a bici-taxista, one of the city's bicycle-rickshaw drivers. On this Sunday, the city is still sleeping off the salsa dancing from the night before. I ride along the malecon promenade, beyond which the sun rays tickle the water of the Bahia de Miel. There are few stores en route, so I'm grateful for the hearty breakfast of tropical fruits, Baracoa's famous hot chocolate, coffee and the standard ration of bread and cheese. I am headed for the first (and only) serious incline, some five kilometres out of town. A few onlookers mouth a greeting. One girl yells, "Dale, dale, tu puedes!" C'mon, you can do it!

The first town, Jamal, is at the 12-kilometre mark. I coast into the main plaza, where local folk gather to share their news. After a brief pause to survey the scene, I move on to find an unpaved dirt road with its own miniature mountain range of exposed rock, where farm animals roam freely. Baby chickens ignore me as they dart across my path. A goat snorts at some agitated piglets.

About six kilometres along this trail, I arrive at the first beach, Playa Cajuajo. It's small, secluded and empty. A young man who lives nearby, Mitchell, offers to bring me a Cristal beer. I park my bike – this beach is worth a longer pause than sleepy Jamal. I take my front-row seat on the sand to watch the courtship in front of me, the waves a gentleman caller kneeling every few seconds, persistent, but time after time rebuked by the shore.

The fins of fishermen suddenly slap the water. Two men emerge onto the shore in snorkelling gear, carrying an assortment of cojinua (scad), salmon, octopus and pargo (porgy). A seafood lunch is tempting, but I forge ahead.

Less than a kilometre further along the road, I face my first real challenge: a puncture from not one, but two nails. I remove the tube to find a rip nearly an inch long. Determined not to waste time fumbling with a flat, I ask an elderly man passing by to go for help.

Minutes later a local man arrives accompanied by his family. Together, Luis Enrique and I try to patch the tube but give up. After deliberating the options, we finally pump air into my spare tube. "No se como agredecerle." I don't know how to thank you, I say. Luis smiles, and replies that here I have a friend.

Back on the highway, I divert down a small road again to for fear of missing a hidden gem. I'm glad I do: the road to Bahia Mata reveals a vast blue opening to the sea with empty fishing boats waiting to be taken out for the day.

Four men sit idly nearby, one holding a chicken by its neck. Wary of their insistence that I drink rum with them, I give one a coin for a swig and move on.

It's another three kilometres to the next beach – Playa Manglito – but it's dishevelled with dead palm leaves scattered about. I don't linger long, and opt instead for the black sand of Playa Barigua a short distance away. Here, regueton tunes (a muddled blend of reggae, hip-hop and salsa) bounce in the distance. A goat bleats in protest. I dive into the water.

Soon, I'm pedalling again, passing through a rock canopy called Paso Aleman, eager to reach Boca de Yumuri, my final destination. In the late afternoon, it's too late to take a boat excursion through the canyon and hike the surrounding cliffs, as some visitors do when they stop here on a tour out of Baracoa. As a consolation, I climb a steep road to watch the river caress the Bahia de Matanzas.

I linger at a snack bar, secretly hoping a truck will stop that could take me back to Baracoa. But after loitering an hour, I realize that either I'll be stranded or riding back along a dark highway. With a renewed sense of urgency, I'm glad to be on my bike, especially when I see red streaks splash across the sky while the sun sets above the hills.

Two days later, between a brief layover in Guantanamo, I'm on a bus to Santiago to begin the second part of this journey. Several hills loom in the distance and to pass the time, I pretend I'm discovering them and give each one a name: La Conquista for the tallest, La Gran Decepción for the one next to it.

Bike rental shops aren't commonplace in Cuba, so I procure my bike by negotiating with jineteros, or touts, in Santiago's main square, Parque Cespedes. It has an upright frame that's not designed for aggressive riding, but the functioning brakes and gear shifts meet my modest requirements.

The goal today is 15 kilometres to another beach, Playa Siboney along the mostly flat highway, which is in a sharp contrast to the wavy streets of Santiago.

Pedalling, I see so much more of the countryside. Farmers walk alongside their cattle. Men transport goods strapped to the racks of their bikes. A man chops grass with a scythe.

I arrive to see a basketball team doing training drills on the sand. I dart past them and jump into the water. While I float, I watch fluffs of cotton conspiring to smother the sun. The clouds win.

I recall something from a conversation with a retired philosophy teacher in Baracoa. Materialism isn't the essence of life, she told me. At that moment, I didn't dare disagree.

Drying off on the sand, I approach a masseuse attending to a client with Aloe Vera plants. She slaps oil on my back for little more than $5. Nearby I find a paladar, a licensed family-run restaurant, and enjoy a lobster lunch. It's the fuel I need for a spontaneous 25-kilometre detour to El Castillo El Morro, a centuries-old castle with dazzling views of the coast.

I've lingered on the coast long enough to soak in its calm, a prelude to Santiago's nightlife and jarring bustle. My biking experiment brought me closer to a more authentic Cuba. I'm glad I had a chance to come back and see it on two wheels.

Before you go, read Bicycling Cuba by Wally and Barbara Smith, a kilometre-by-kilometre guide featuring dozens of routes.

The easiest way to get to Santiago or Baracoa is via Holguin. Air Canada, WestJet, Sunwing and Air Transat all offer direct flights, although seasonal restrictions may be in effect.

From Holguin, an air-conditioned Viazul bus to Santiago is about four hours, and eight-plus hours to Baracoa. Ask at your guesthouse or hotel where to rent a bike, as there are no formal shops that supply them. Each airline has a different cargo policy if you bring your own, so check before you travel.

If a solo bike adventure isn't for you, G Adventures offers an eight-day cycle tour of Cuba's provinces starting and ending in Havana. Highlights include eco-village Las Terrazas and Cayo Jutias, a divine beach after a full 60-kilometre day. There are some challenging hills, but there is always a bus available to pick up a vanquished cyclist. The tour starts at $1,649 (airfare not included). 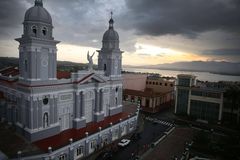