DO: Be entranced by Up North at the Art Gallery of Alberta.

The beginning of The End is easy to miss. But you won't want to overlook this installation that is the highlight of the Up North exhibit. Spot the heavy black curtains near the start of the exhibit and enter a pitch-black room in which videos of the instrumentation of folk-country music brighten five large screens. To your right: a man playing a grand piano on a frozen lake before a backdrop of jagged Rocky Mountains. Directly in front of you: a man on a bass guitar in deep snow in brush; and beside him, two shivering men playing guitars in a rocky alcove. To your left: a drummer and guitar player immune to their setting on a frozen shore. And, on the screen almost behind you: the same duo playing guitar and banjo near the edge of the woods.

It's a five-channel video installation by Icelandic artist Ragnar Kjartansson (made at the Banff Centre, with musician David Thor Jonsson), and it's a magical, mesmerizing juxtaposition of warm country and imposing landscape. You'll find yourself wanting to lie on the bench to soak in the music and the images.

But get up and take in the rest of the exhibit, which evokes more of a barren and dangerous (almost otherworldly) sense of the North. The strange cacophony that is Flotsam and Jetsam (a different kind of northern music made with found-objects instruments) is a jarring counterpoint that takes you into the wilderness (if you close your eyes). Kevin Schmidt's A Sign in the Northwest Passage – text from the Book of Revelations hand-routered into a large cedar sign and installed on flotation devices on ice in the Northwest Passage – seems a throwback to another century, while his light, sound and dry-ice performance called Wild Signals pitches us into an eerily dated conception of the future.

Definitely not your typical vision of the North. You'll want to return to the warm confines of The End.

DO: Walk along the shore of the North Saskatchewan.

Edmonton's reputation as a not-so-sparkly industrial city is, if not shattered, at least set aside when one arrives in the heart of downtown and spies the lush greenery that unfolds on the banks of the river that bisect the city. Joggers and walkers pour out of the woodwork at lunch hour to run the trail along the water's edge. Lace up your sneakers and join them, or simply soak up some autumn sun in this natural setting.

If the thought of an afternoon at a mall puts you in a catatonic state, pump up the action by popping into the Wild West Shooting Centre on the upper level of the behemoth West Edmonton Mall.

I learned to load, shoot and empty a 9mm CZ 75 Shadow ("Even a seven-year-old can shoot this one," instructor Joel Mariano says); a 9mm Glock 34 (a light, all-polymer service firearm used in the U.S.); a 40-calibre Glock 22 (used by the Edmonton Police); a 1911 Ranger 45 Automatic Colt Pistol (you'll feel like you're in a John Wayne movie); a .38 Special (similar in feel, Joel says, to the .44 Magnum made famous by Inspector Harry Callahan in the Dirty Harry movies; it smokes when it fires, and yes, you'll feel lucky); a .45 Long Colt single action Ruger Blackhawk revolver (my first bull's eye!); a .357 Magnum single action revolver (arms are getting tired now); and a Ruger Super Redhawk .44 Magnum (single action all the way for me).

If, like me, guns are foreign territory for you, don't be intimidated by the array of long guns and camo paraphernalia when you enter the centre. Owner Flora Kupsch (a champion sharpshooter herself) or one of her staff will set you up with an instructor for your lesson.

Her friendly advice: "The key to shooting is to put one foot back and kind of lean forward. Don't overextend, don't tighten, relax your elbow a little."

Her warning: "The instructors will be aggressive with you if you're messing around."

My amiable instructor, Joel, lays out three cardinal rules: always keep your gun pointed down range; keep your finger off the trigger until you're ready to fire; and stay in the safe area of the shooting booth.

And my friendly advice: Don't wear a loose-fitting shirt. I have a burn mark on my chest from a casing that kicked back and got caught like a piece of popcorn at the movies.

A strange calm will come over you as you line up your sights, focus and prepare to fire. (At first, other shots will startle you; soon you won't even notice.) But there's a heaviness to shooting if you think beyond Sudden Impact to the real-life police officers who use their firearms in life-or-death situations. Don't think too long, though. Who's kidding who? This is a rush.

DON'T: Get a mechanical water massage in a sealed tube.

Remember tanning beds? Can you picture those angled water jets at the car wash that cover your vehicle with tricoloured wax? Put the two together with a person lying inside: A sealed tanning bed with blue windowed lid and V-shape jets that squirt water up and down over your body as you lay in full view of every West Edmonton Mall shopper who happens to wander by.

Considering that this is a mall with a water park – including a six-storey full-loop waterslide, a wave pool and a 32-metre plunge – maybe aquamassage isn't such a stretch here. But you didn't see me renting a bathing suit to give it a whirl. Attention train lovers: You know you want to sleep in a caboose
May 30, 2011 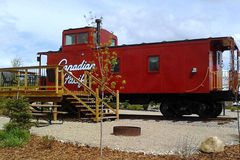