"He is part of the city's authenticity and magic," the woman says as she notices me staring at the elderly man, "and it takes him and the others less than two hours to light all 187 lamps."

It is dusk in Zagreb, Croatia's forgotten capital, and for the past half-hour I have been watching the hunched man as he lights the gas lamps peppered throughout the city's downtown core. By the wrinkles on his face, I could almost believe he has been doing it since the lamps were first lit in 1863. I ask him his name, but he doesn't speak a word of English. He simply smiles and moves on to the next.

Zagreb isn't yet used to sharing its secrets with outsiders. Long overlooked by tourists in favour of Dubrovnik or the Dalmatian islands, the city is only now beginning to attract interest. And it's an interest the city seems slow to respond to. Though Zagreb is rich in beauty and history, visitors are still a bit of a novelty, and patience and a sense of adventure are required to navigate this city of one million, where many locals speak little English, the majority of menus are available only in Croatian and credit cards are a rarity even at major train and bus stations.

Luckily, Trg Bana Jelacica, the city's main square, is surrounded by pedestrian-only streets and plazas complete with plentiful cafés, which allow a traveller to get oriented while enjoying an inexpensive coffee or a glass of wine.

Cappuccinos rarely go for more than two dollars, but a glass of Croatian wine can often be a cheaper. Though rarely exported because of limited quantities, given its proximity to Italy, I shouldn't have been surprised to discover the country produces many lovely vintages. Certainly Zagreb's never-ending gelato stands also speak to its proximity to Italy, though the gelato you get here is much lower in price, if not in calories.

Having oriented and stuffed myself in equal measure, I give the nearby Dolac market a miss and walk a few minutes north up quiet side streets to St. Mark's church, arguably Zagreb's most recognizable landmark.

"You are lucky she is naked," says the man, nodding toward the church. Pointing to my camera, he adds, "Take many photos, they may cover her again soon." I assume he is referring to the lack of scaffolding that for the past 20 years had hidden St. Mark's from view. As I eavesdrop on a guide with a handful of English-speaking tourists in tow, I learn that more restoration work is indeed planned for this Gothic marvel. Though it's midday, we appear to be the only tourists admiring this mosaic masterpiece. I almost feel sorry for the church. Finally, after two decades, a chance to show off - but hardly anyone is looking.

Zagreb's treasures aren't just to be found in the downtown core. On the outskirts of the city lies the Museum of Contemporary Art, Croatia's largest museum and the first one to be built in Zagreb for 125 years. Completed in 2009, the collection contains international works, but it prides itself on highlighting lesser-known Eastern European artists.

Not exactly a "devotee" of modern art, I came here to explore what I heard was an abundance of intriguing, interactive displays, the most famous being Double Slide by artist Carsten Holler. The piece is exactly that, two slides (one three storeys, the other four) built into the museum. I line up with adults and children to ride down the sculpture and experience what is at once an instrument of learning and an amusement-park feature. (It's not often one hears raucous laughter in a museum.) I'm not sure what I was supposed to learn, but I line up again for another slide.

A more sobering experience awaits at Zagreb's striking Mirogoj cemetery. Considered to be one of Europe's most beautiful cemeteries, it's an imposing space with formidable walls draped in ivy and topped by cupolas. Inside, hugging the walls, graceful arcades with intricately tiled floors are laden with myriad Renaissance statues and paintings. I feel as though I've entered a museum or an art gallery, and it's clear that here the dead have been deemed as worthy of beauty as the living.

But it's time to reunite with the living, so I head out past the main square toward Bogoviceva Street, where I am told I can find some of Zagreb's best bars and nightlife.

Whether it's the soft glow of the gas lamps or the laughter coming from the smoky doorways of the crowded bars, night seems an especially charming occasion to make Zagreb's acquaintance. Though I have always been a fan of Renaissance architecture, walking past Marshal Tito Square toward the city centre, I conclude that even lit up the city's few stately examples can't hope to outshine Zagreb's cheeky baroque buildings, many painted in shades of blue, yellow and rose. Not overdone, they demand attention and happily remind me that Zagreb sometimes likes to shout instead of whisper. It's up to the traveller to learn how to listen.

This year's hot cruises: Take one you can brag about
February 25, 2011 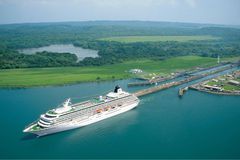 Croatia glows
July 8, 2006
Rinse and spit in Croatia
May 2, 2007
Follow us on Twitter @globeandmail Opens in a new window
Report an error Editorial code of conduct
Due to technical reasons, we have temporarily removed commenting from our articles. We hope to have this fixed soon. Thank you for your patience. If you are looking to give feedback on our new site, please send it along to feedback@globeandmail.com. If you want to write a letter to the editor, please forward to letters@globeandmail.com.
Comments