Both islands call the Atlantic home, but one, Cape Breton, floats in the frigid North Atlantic while the other, Tobago, lies almost equidistant between the equator and the Tropic of Cancer. Both islands, like much of the Earth, are the product of the geologic violence of tectonic plates grinding against each other; both have wandered far from their places of origin to where they lodge today. One of them, Cape Breton, reassembled itself many millions of years ago in a geological ménage à trois, with the two younger parts each drifting from the northwest coasts of South America and Africa to fuse with a much older piece.

I know nothing of its geological history when I first see Cape Breton, Únamakika to the Mi'kmaq, some 15 years ago. What I do know is that as my eyes alight on the green sweep of mountain sides, the curves of land that fall away to scenic beaches, I am undone. For the first time in my then 30 years in Canada I feel as if I have come home: My breath quickens, my heart stumbles as it does so often on that tiny, tropical shard of a continent I still call home. No other place in Canada has ever had this effect on me. Simply put I feel I can die, now that I have seen this that is before me. I dub the island Tobago of the north.

Much later, when I unearth the island's geologic pedigree, I chuckle to think that geology was there first – making Canada a multicultural homeland long before the tag was applied. But it was Cape Breton that reminded me of love, in the concept of "home," a long, long way from home.

Novelist, essayist and poet, M. NourbeSe Philip was born in Tobago and moved to Canada in 1968.

No one area of Toronto is similar to another. Some blocks seem like catchment areas for people from far-off places and sometimes just crossing the street gives the feeling of being in another world. There's one place though that's different, a place where everything appears to converge.

I cannot recall the first time I entered Union Station but it must have been about 20 years ago, soon after my arrival from Trinidad. I was in my 30s then and I must have been awed both by the architecture and by the crush of people spilling out of the innumerable entrances. I would not have known then that Union Station, open to the public in 1927, is a connecting hub for Via Rail, GO Transit and the TTC, or that it is the busiest passenger centre in the country. It took a while, too, before I discovered the covered walkways and tunnels leading to most of the nearby shopping areas and to places like the CN Tower.

Since then, I have become a bit more familiar with Union Station. In my most recent novel, an immigrant obsessed with crossroads and random encounters makes the station his home. (I am not advocating this.) This character was a bit crazy but I have often felt that Union Station is the perfect introduction to Canada: The solidity of the architecture suggests a conscientiously crafted past, while the people who converge there daily could be from anywhere in the world.

Born and raised in Trinidad, Rabindranath Maharaj moved to Canada in the 1990s. His novel The Amazing Absorbing Boy won the 2011 Toronto Book Award and the 2010 Trillium Book Award. Other works have been nominated for the Rogers Writers' Trust Fiction Prize and the Commonwealth Writers' Prize.

The very first evening we spent sitting out on the deck enjoying the warm night air at Bay Lake, there was a sudden commotion by the water. A large bird landed on the shore, stood looking at us for about a minute, then took off. It was a loon.

The cottage is accessible all year round, and since then we have found much to delight in every season – deer wandering into the garden, leaving footprints in the snow; the sound of the ice creaking and cracking; early-morning mist swirling on the water's surface; the primal thrill of a sudden thunderstorm; the ducks making their daily rounds; the woodpeckers, bluejays and warblers that flit among the trees; the richly coloured autumn leaves reflected in the lake's perfect mirror on still October days.

The lake is also a wonderful place to write, its silence and stillness conducive to meditation and creativity. And in those moments when the right words just won't come, I can go for a walk along the lane or take the rowboat out on the water. In the evening, we sit out as the sun goes down behind the trees and the world slowly darkens. The loon has never visited us again, though we have often heard its haunting cry in the night.

My first visit to Banff was really an instant response to a grainy, black-and-white photo in a book called The Emigrants by W.G. Sebald. Upon arrival (the book still in hand) I stood in front of the colonial castle of a building depicted in the photo. On the slopes of the magic mountain stood the ominous, yet inviting Banff Springs Hotel, but it had the feel of a sanatorium, and the mountain behind it was perhaps the only one in the world named after an element in the Periodic Table. Sulphur gave me full permission to name all the mountains close-by: Cadmium, Strontium, Aluminum… They were hills really, but I called them mountains anyway.

The streets in the town were all named after wild animals (Lynx, Gopher, Wolf, Cougar). From Grizzly I noticed a thin veil of fog and apricot coloured dots by the green ridge of Mount Sulphur. Clumps of pure gold as if on fire. I have little recall now whether it was Mary or Chantal at the Parks museum who introduced me to a tree called a larch: a peculiar conifer that turns yellow in fall and sheds its needles (as soft as the material silkworms end up making). The larches made me climb up Sulphur, and along the ridge I also "discovered" an abandoned cosmic ray observatory.

Whenever I recall Banff I cannot help but think of cosmic rays and neutrinos. Particles that go right through you. No charge. Almost no mass. Ghost particles. They are all around us, invisible, dancing. Tens and thousands of them, passing through things immersed in time, and passing through things immersed in space, and SPACE in Banff really belongs to the natives, and the names they gave to the mountains continue to have a ghostly presence. Sleeping Buffalo, the original name given to the mound colonial engineers relabelled Tunnel Mountain. The Cloud Maker, more appropriate and beautiful than Mount Rundle, named after a missionary.

The reason I keep returning to Banff is a rock. A dozen years ago, during the millennium change, I stood on a nameless rock, half visible, half submerged in Bow River, and for some strange reason it was there I thought of memory and oblivion, and made the modest decision to become a writer. 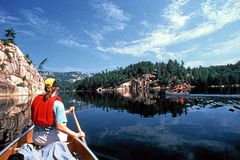 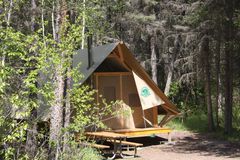