From my seat on the plane, the waters of the Atlantic Ocean are a dark, steely blue – the colour of a frozen Canadian winter. But then we bank toward Turks and Caicos, and the water changes to a shining turquoise so clear and bright it almost seems fake.

Things somehow become even more strange and dazzling when I get to the beach, perhaps because, after our record-setting winter, I forgot what sun this hot feels like. Yes, I think, nodding my head and sipping a rum punch, let’s annex this place. 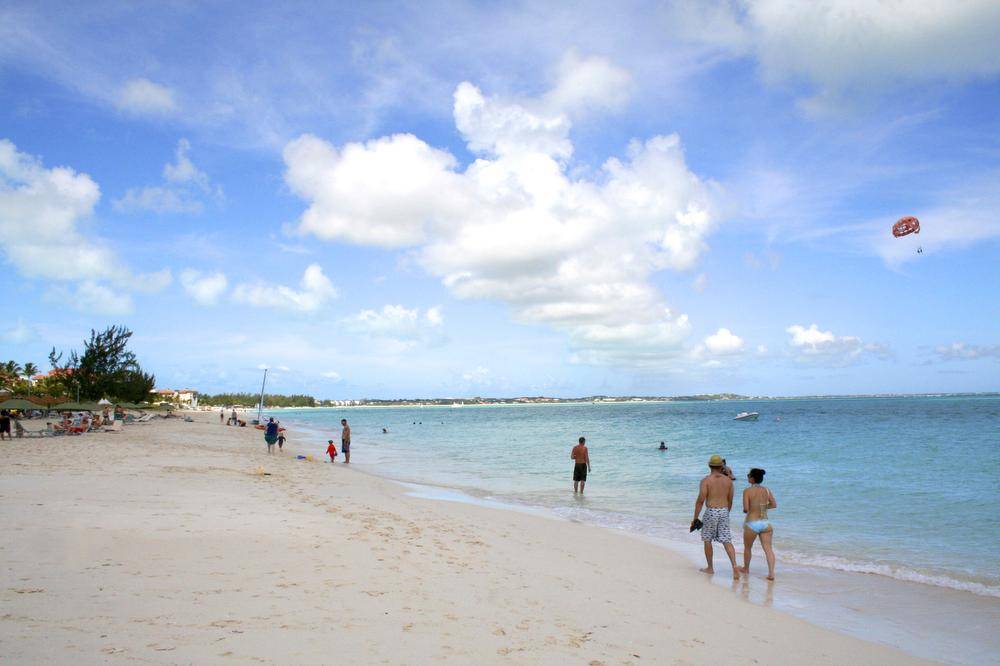 Grace Bay Beach on Providenciales consistently ranks high in lists of all the best beaches in the world. (Dave McGinn/The Globe and Mail)

Canadians have been having that same thought for close to 100 years.

The idea made headlines again last month when Rufus Ewing, the Premier of the British territory in the West Indies, visited Parliament Hill to discuss trade issues and stopped by Toronto to open a tourism office. Conservative MP Peter Goldring, who proposed annexation back in 2003, again pitched the idea of an 11th province. But as Ewing put it: “There’s no marriage without some kind of relationship.”

The relationship between the two countries stretches back almost a century to 1917, when then-prime minister Robert Borden first floated the idea of annexation. But the proposal really picked up steam in 1974, when Max Saltsman, an NDP MP representing Waterloo-Cambridge, tabled a private members bill asking that a parliamentary committee investigate some form of union between the Great White North and the islands (ideally, becoming part of Nova Scotia). At the time, Turks and Caicos had only eight hotels, no fresh water and a population of less than 6,000.

Of course, times change; today, Turks and Caicos has a population of more than 30,000 and a thriving tourism industry. Meanwhile, Mexico has become Canadians’ preferred backyard. So I wanted to know: If we’re in a relationship with Turks and Caicos, is it time to go steady? And – perhaps more importantly – do they even want us? 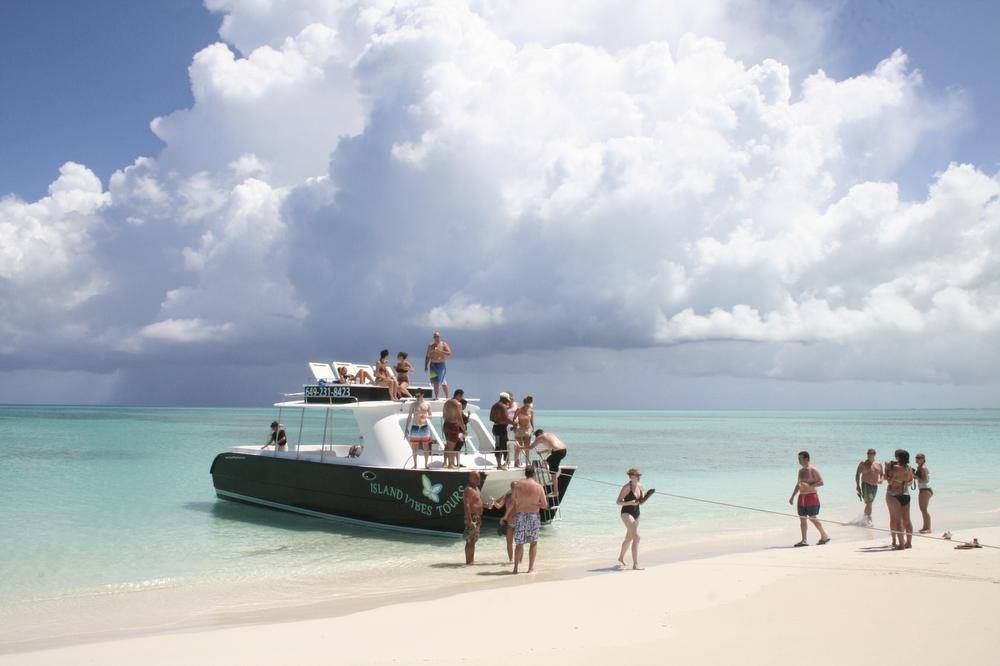 A snorkelling trip includes a stop at a small island created by Hurricane Donna in 1960. (Dave McGinn/The Globe and Mail)

I get my first inkling there might be trouble in paradise aboard a catamaran during a half-day snorkelling trip run by a company called Island Vibes.

I’m one of about 16 picked up along the beach, welcomed aboard by an ever-smiling man in a white captain’s hat who identifies himself as “Captain Luke Skywalker.”

Out at the reef – the third largest in the world – we don snorkel gear, dive overboard and go exploring. The marine life is incredible, although nothing can beat floating lazily in the water, languidly kicking my flippers to follow fish as they dart beneath coral.

After an hour or so, we’re back on the boat, and Captain Luke Skywalker (a.k.a. Berresford Samuels) speeds out to a stretch of beach created by Hurricane Donna in 1960.

He gathers us in front of the boat and presents three large pink and white conch shells. Using a small hammer with a blade attached, he cracks one open, pushing the conch out. Word to the wise: If you ever want to eat conch again, look away when this happens. It’s a weird alien blob that bears no resemblance to deliciously fried fritters.

Samuels returns to the boat to make conch salad. A few people look for iguanas on an otherwise uninhabited sandbar dotted with trees and shrubs. The rest of us hang out, swimming or wandering the beach looking for shells.

As we chow down in the sun, I ask Samuels about the annexation proposal. 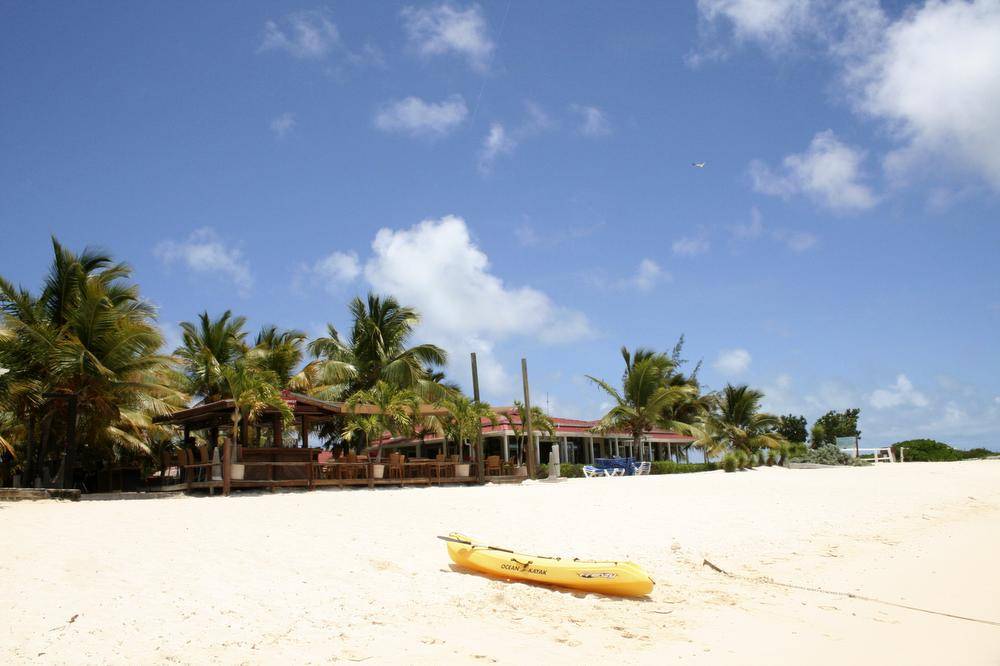 The beach at Bohio Dive Resort on Grand Turk, home of some incredible wall diving. (Dave McGinn/The Globe and Mail)

“It’s a good idea. Just one problem,” he says. “Canadians are too strict.” I know what he means: Rules down here can be, let’s say, loose. And you’ll never catch anyone staring at their watch, fuming if someone is a few minutes late. “Island time” reigns.

And right now that means squeezing in one last bit of fun: We all take turns jumping off a diving board fixed to the boat’s roof, cannon-balling over and over again into the clear blue water.

I’m surprised to learn my swim buddies don’t include any Canucks. Regardless of any political plans, the fact is we’re already taking over the islands.

At the fantastic Provo Golf Club on Providenciales, the only 18-hole course in Turks and Caicos, I meet Sarnia native Dave Douglas, who serves as the director of golf. About 30 per cent of all golfers who play here are Canadian, he says.

Annexation is so vastly complicated – the health-care issues, changing the tax policies – that Douglas does not see it happening, but all the talk has been great advertising for the islands, he says, standing in the pro shop near the 18th green.

Designed by renowned golf-course architect Karl Litten, the Provo club officially opened in 1992. As Douglas points out, the course is in unusually good condition for the area: The fact that it’s owned by the water company means it’s always well irrigated.

Only 120 or so golfers play on any given day during peak season, so you never have to worry about getting a tee time. One of the few groups I see out on the course waves me through, and when I finish they welcome me in the bar and buy me a beer. 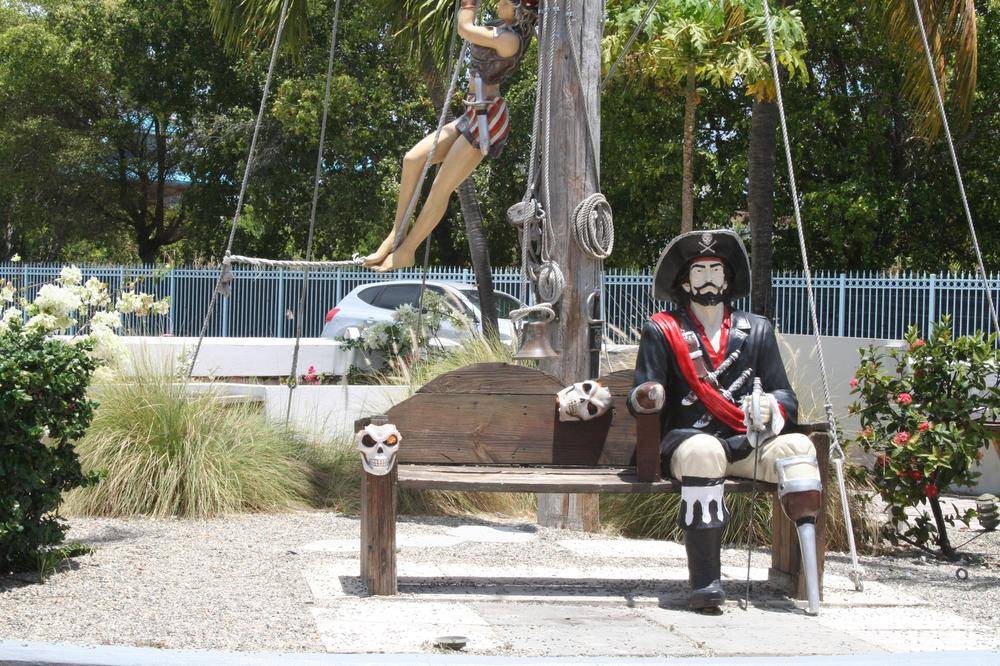 I end up staying there all night, eating fish and chips with a party of 10 that includes expats from Canada, England and Scotland, as well as four sisters from Kansas there on what one calls their “Ya-Ya Sisterhood trip.”

It’s only on Sunday that I finally make it to the restaurant I’m most looking forward to checking out. Coco Bistro came highly recommended in just about every web search I did. It’s owned by executive chef Stuart Gray, who cut his teeth at Toronto’s Windsor Arms Hotel before moving to Turks and Caicos in 1993.

The 110-seat restaurant, which boasts an outdoor seating area surrounded by palm trees, was by far the best meal I had on the island. Chef Gray recommends the tuna sashimi and conch ravioli. Both are delicious.

Add in some coconut pie and I’m stuffed riding my bike back to the hotel along a two-lane road that’s devoid of both people and – charmingly – chain restaurants.

While Canadians would likely be fine giving up familiar fast food, I discover one thing that might not jibe with us, used as we are to instant access to entertainment whenever we want it. 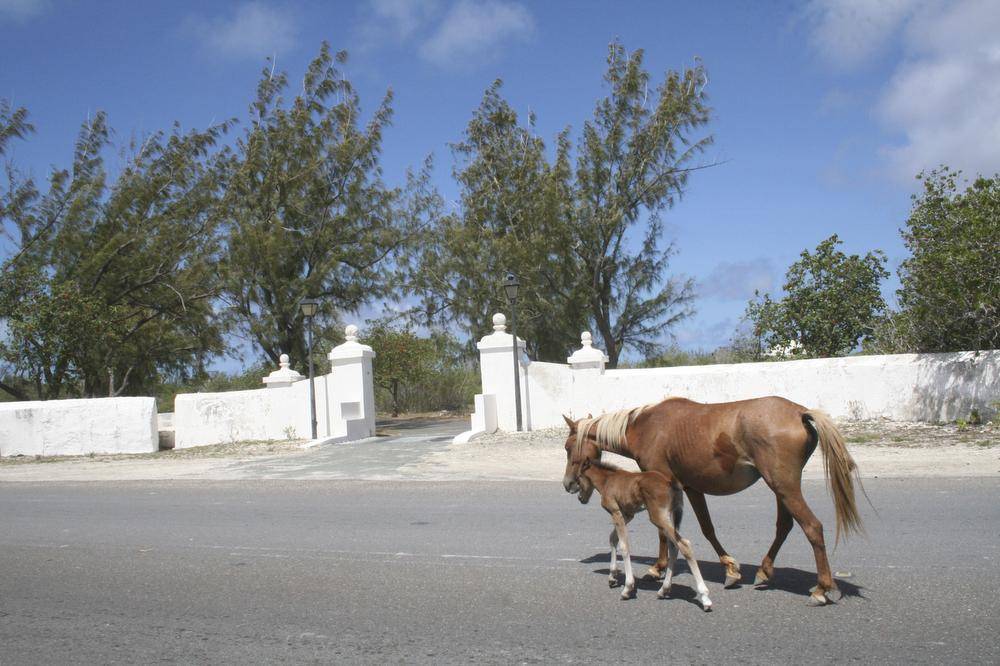 Unless there’s a cruise in port, there are usually more animals than people on the small island. (Dave McGinn/The Globe and Mail)

If you’re in Turks and Caicos on a Sunday, definitely do not go to Grand Turk unless there’s a cruise in port. There is no ship to be seen when I arrive, and the small island feels deserted. Governor’s Beach, a gem, is empty. The lighthouse, built in 1852, is desolate. Most locals, I learn, are in one of eight churches. I spot more feral horses and donkeys, leftovers from when the salt industry was abandoned, than people.

I take a early plane back to Provo and head to my hotel, only to be greeted by more bad news.

A “lobby ambassador” and I get to talking in a stairwell, which lends the conversation a conspiratorial feel. She has five grandchildren, she says, and she leaves it up to them and their generation to decide whether they want to become part of Canada. How does she feel about us?

“I heard they’re cheap,” she said. “They don’t like to spend money.” (Go shopping in Provo, see the high cost of things and it’s easy to understand why that might be the case.)

On behalf of all Canadians, I’m feeling a little rejected.

Of course, no one said courtship was easy. And some islanders are waiting for us at the door, flowers and chocolates in hand, hoping we’ll love them back.

On my way to the airport to fly to Grand Turk, I get in a cab with a small Canadian flag hanging from the rear-view mirror. I ask the driver about how he’d feel to be part of Canada.

“That would be sweet!” he says. “Fort McMurray would be the ideal place for me to go make some money.”

But, he adds, “a lot of people here, they just go with the flow.”

As I tip my hat back and look out at the water, I think we should probably just do likewise. 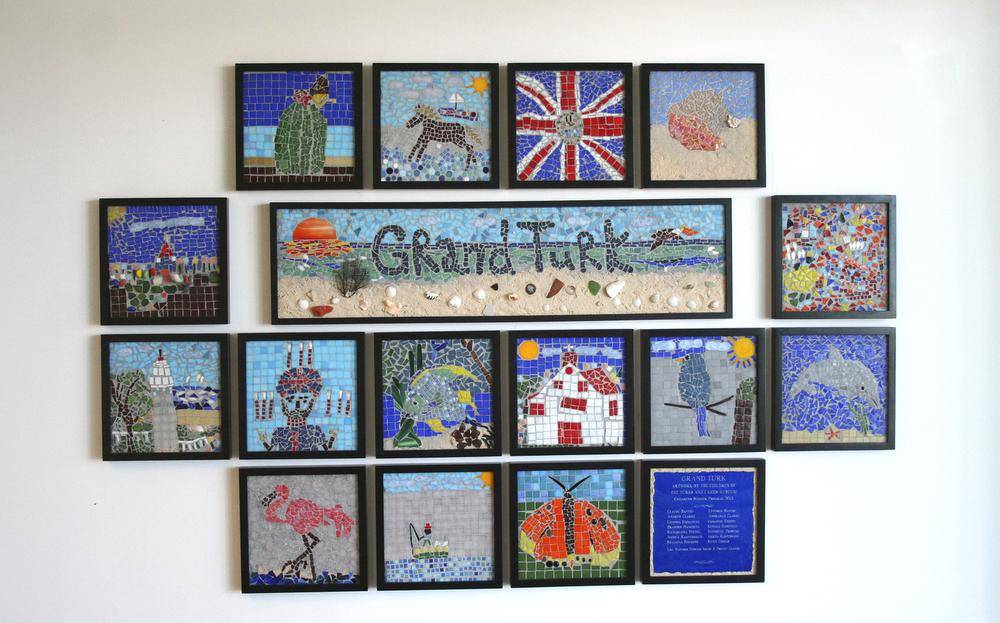 THE LONG LOVE AFFAIR BETWEEN CANADA AND TURKS AND CAICOS

Max Saltsman, an NDP MP, introduces a private member’s bill asking that a parliamentary committee investigate annexation of the islands in a bid to keep tourism dollars in Canada. It never reaches the House floor. Meanwhile, an independent group in Ottawa starts the Turks and Caicos Canadian Association to press for the establishment of “Muskoka South.” Turks and Caicos sends a delegation to Ottawa, but the dream is dashed a short while later by external affairs minister Mitchell Sharp, who says any union wouldn’t be mutually beneficial.

Polls show that 90 per cent of Turks and Caicos residents approve a union. (That number drops to 60 per cent by 2003.)

If you plan on seeing as many of the six main islands as possible, be prepared for planes and ferries. The only way to get to Grand Turk from Providenciales is by air. There’s a ferry from Provo to Middle Caicos and North Caicos. tciferry.com

The Sands at Grace Bay, where I stayed, has 114 suites in six buildings each three storeys high, as well as a fantastic pool and a long stretch of beach front. From $195 a night. thesandstc.com

Parrot Cay by COMO, located on the private island of Parrot Cay (where Bruce Willis owns a home) can only be accessed by boat from Providenciales. Luxury seekers, this is your destination.From $500 a night. comohotels.com/parrotcay

A favourite among the expatriate community, the Caicos Café has some of the best seafood on the island, with a menu that includes Mediterranean style seafood casserole, and linguine with brandy flambéed lobster morsels. facebook.com/caicoscafe

Hemingway’s on the Beach, located on Grace Bay, does a great rum punch, but best of all is its conch empanada. thesandstc.com

And if you’re in Turks and Caicos on a Thursday night, you must stop by the Fish Fry, in the Bight area of Providenciales. More than a dozen stalls sell jerk chicken, conch fritters and other tasty food. It starts at 5:30 p.m. and runs to 9:30, and there’s a different band every week. The night I was there, the band was playing a calypso version of Stagger Lee. I took my jerk chicken to one of the many small catamarans on the beach, a popular option for an event so packed it can be difficult to find seating.