It is close to midnight when we walk up to the deserted Heceta Head Lighthouse. A full moon, big and white, sits over the Pacific, the starry sky cut by the 1,000-watt beam that slices through the dark every 10 seconds. Visible from 33 kilometres away, this is the brightest light on the Oregon coast – a warning and comfort to sailors since it was lit in 1894.

Although this is one of the most photographed lighthouses on the West Coast, my mother and I are able to steal this solitary moment because we’re staying at the B&B in the lighthouse keeper’s cottage; hefty Maglites found in each room are meant for just such late-night adventures. Standing at the railed precipice, we watch the spinning rays of light reach out to the dark ocean like clock hands. 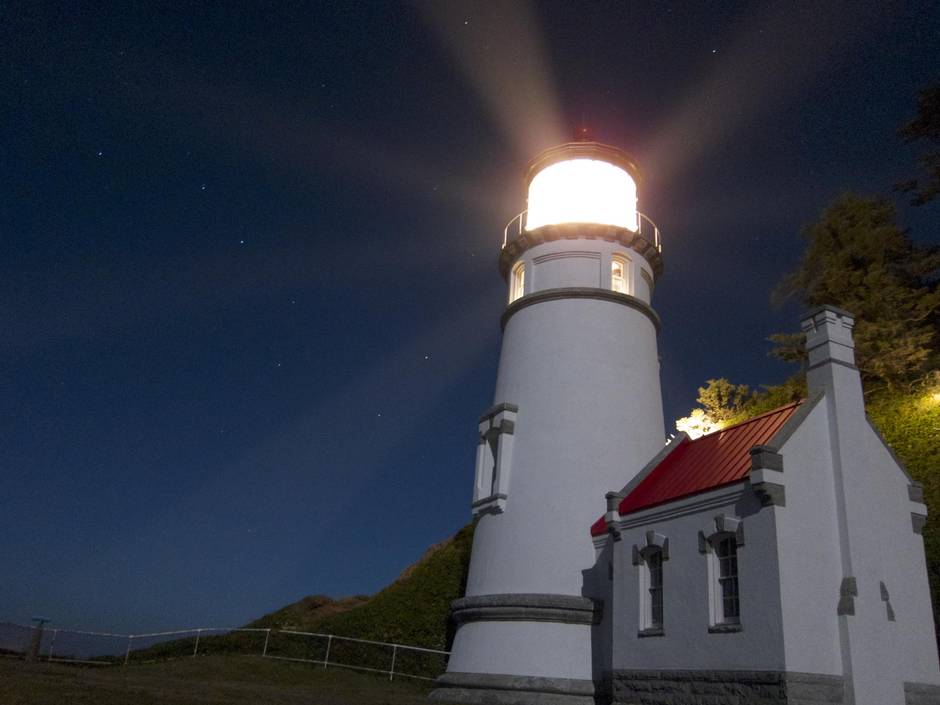 Next morning, during a seven-course breakfast featuring local lox, feta, berries and plumcots, our host Mary asks whether anyone heard Rue, the ghost who supposedly lost two children and tidies the attic above my room. I had not, thank goodness, although a binder full of testimony attests to her existence.

Portland often monopolizes tourists’ attention in Oregon, and many road trippers only drive the California stretch of coast-hugging Highway 101. They are missing out. The 300-kilometre stretch of rough rock between Florence and Astoria, we discover, has its own peculiar drama and easy hospitality. Technically, it is a four-hour drive, but one could spend a slow week skirting the cliffs and crags, following the two-lane road as it bends around mountains or cuts through rare temperate rainforest. We have just three days to explore the small coastal towns and natural diversions. 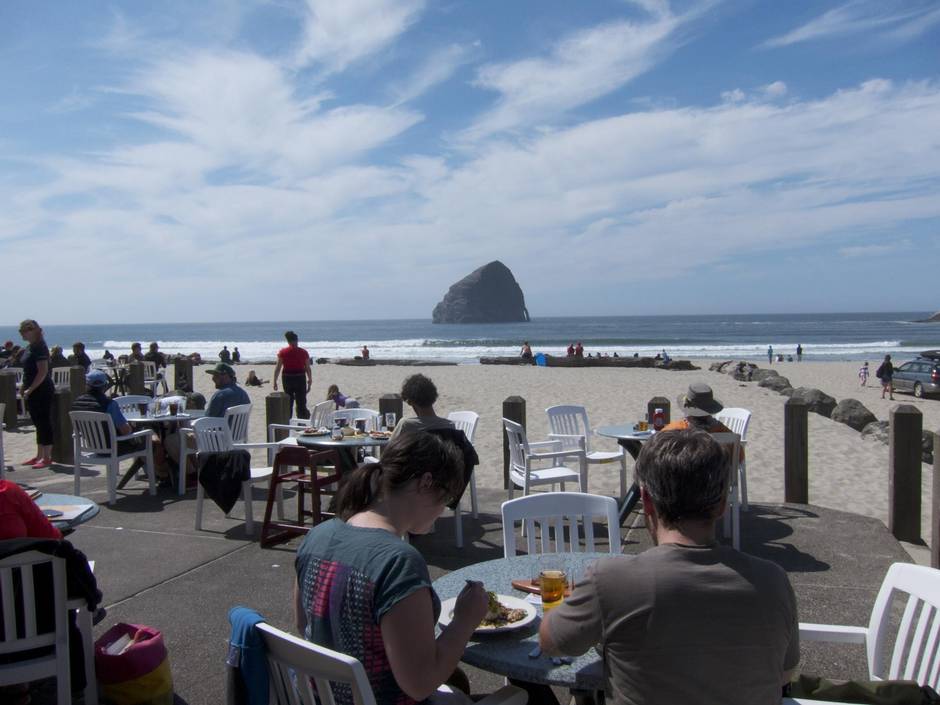 Leaving Heceta Head, our next stop is Newport. As the wind kicks up, we shelter in the eclectic Books on Beach, which sorts inventory under unusual categories, including “Watch Your Mouth!” (food) and “Romance When You Least Expect it.”

“Sometimes I go overboard with the label maker,” acknowledges owner Bob Koch. He tells us of the storm watchers who come into his shop dripping wet, looking for Kerouac – “Everyone is on a road trip” – which he has placed (with a hint of pleasure) on a discouragingly low shelf.

The Sylvia Beach Hotel also turns out to be a reader’s paradise: no radio, TV or phones in the rooms – but a well-stocked library with a cushy reading room looking out over the Pacific. Each room is decorated according to an author: The ones themed after Jules Verne, J.K. Rowling and Dr. Seuss are standouts.; we’re given the African-styled Alice Walker room.

The four-course family-style dinner is not to be missed, athough one’s enjoyment will depend upon whether the idea of playing Two Truths, One Lie with strangers terrifies or appeals, as it’s tradition here. We laugh about a lifetime of antics with two Idaho couples and a British expat. One was arrested for gun and drug smuggling in Utah (and promptly released), another hiked more than 1,600 kilometres through Vietnam in the army. I lie that I once worked for a prime minister, and manage to fool some. Afterwards, guests decamp for spiced wine, board games and books. 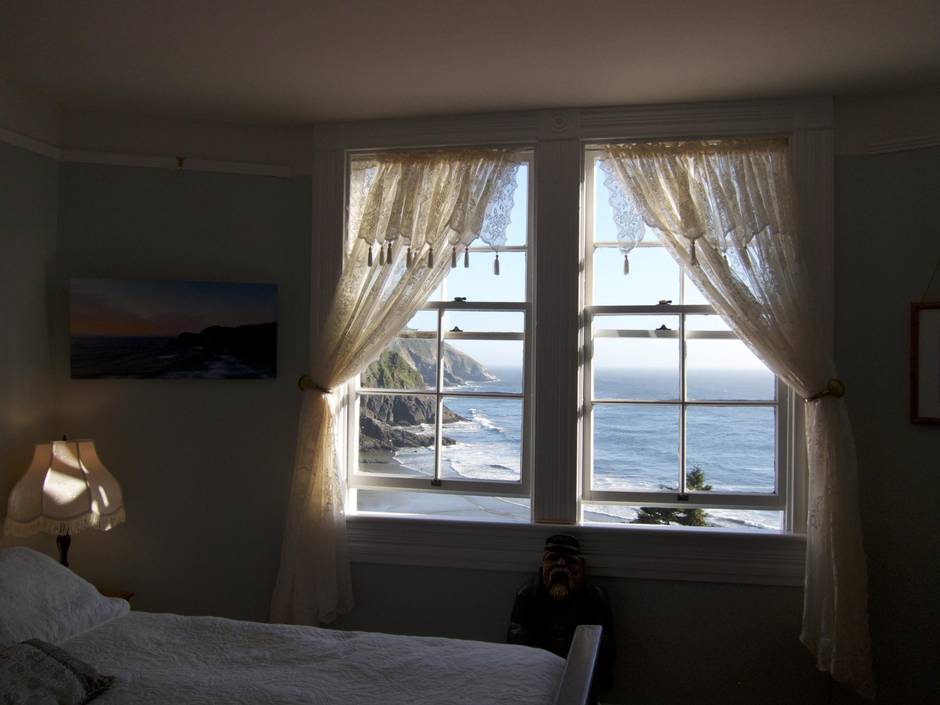 Next morning, we hit such a spectacular stretch of coast that I have to chastise my mom for her wandering eyes as she drives. Unfortunately, we have no luck spotting whales at Depoe and Boiler Bays.

Pulling off at an unmarked gate, we follow a logging road to the Cascade Head trail, a cool, quiet walk through protected temperate rainforest of mossed Douglas fir and Sitka spruce that opens to headland meadows with spectacular views south of the long coast. Elk graze the grass below. Developers once coveted this area, but the Nature Conservancy saved it in the 1960s, in the process safeguarding one of only five places home to the threatened Oregon silverspot butterfly, as well as 99 per cent of the Cascade Head catchfly flower. We descend the steep switchbacks and edge along cliff tops until we realize we must climb back up.

Famished, we later grab a beach-side patio table at the Pelican Pub & Brewery in Pacific City. The relentless wind makes any type of umbrella shade impossible and we hold onto our hats while lunching. People crawl up the looming sand dune and disappear over the top. Surfers laze on shore and bob in the cold waves. A rocky incisor juts out of the sea.

Descending from the mountains, we pop in at Munson Creek Falls to see the tallest waterfall (97 metres) in the Coast Range. Then the relief of a straight road leads through pasture lands to Tillamook.

The huge dairy co-op tempts with all things cow, but we stop at Blue Heron Cheese instead and stock up as children romp through its petting zoo.

Tired from the speed of travel, we’re ready for a quiet night by the time we reach Manzanita. We watch DVDs from our motel’s collection and munch on fennel-infused salami and drink an Oregon pinot noir. At sunset, the town gathers on the beach to witness the ocean snuff out the sun while a “preacher” wails on a guitar in front of his tie-dyed hippie Jesus bus. 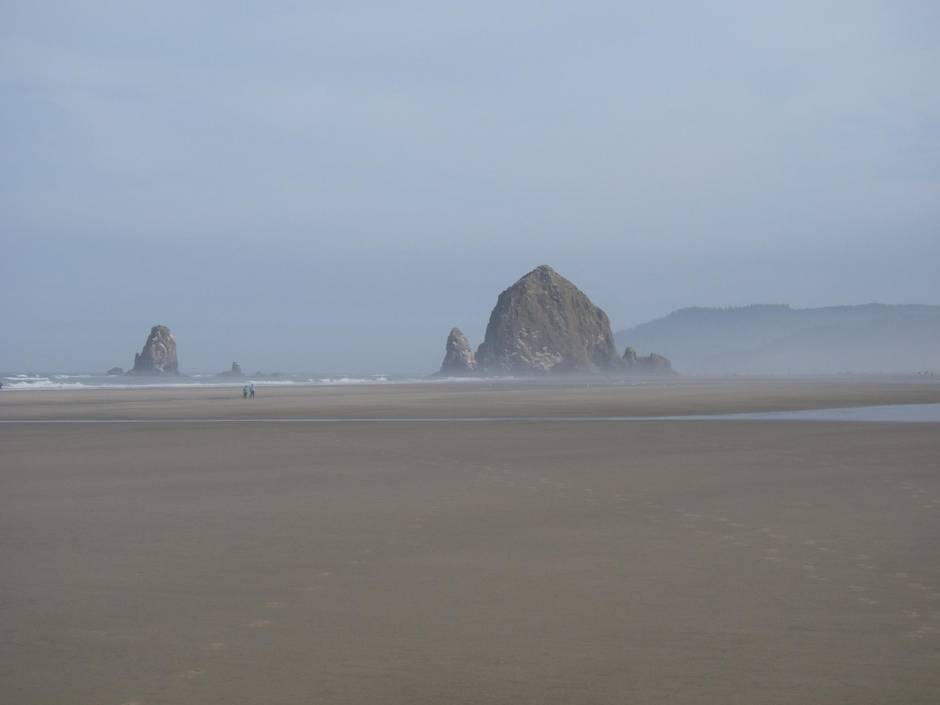 Cannon Beach disappears into the morning haze, silent except for the surf. Haystack Rock emerges, a volcanic hulk that I remember from the opening scene of the movie The Goonies. Adults and kids alike explore the intertidal pools, coloured bright with huge starfish.

Astoria is our last stop, with a charming downtown I’d love to explore. But we have a single goal: fish ’n’ chips, and the line is already 20 deep and growing at Bowpicker, which hasn’t even opened.

From a cozy converted fishing boat, the mother-daughter team fry and serve the best breaded albacore I’ve ever had. We savour it unadorned while stuck in traffic on the Astoria-Megler Bridge, racing north to make the ferry back to Victoria. 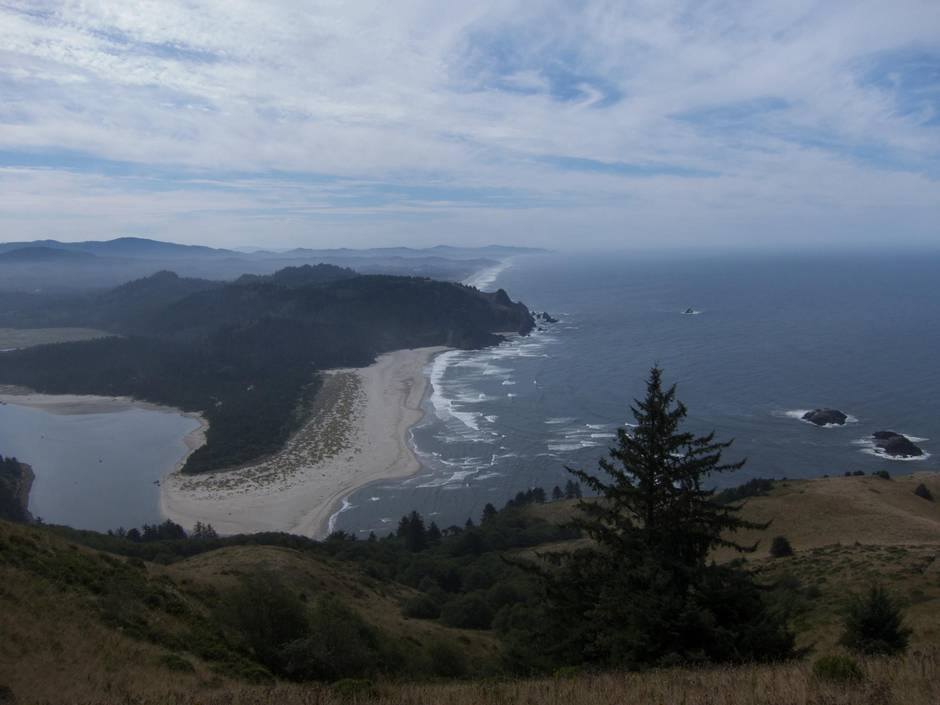 Heceta Head Lighthouse Bed & Breakfast: Listen to the waves crash against the rocky shore in one of the Pacific Coast’s last remaining lighthouse cottages. From $209, May 1 to Oct. 31. Highway 101, mile marker #178 and 1/4th; hecetalighthouse.com

The Sylvia Beach Hotel: With rooms themed after famous authors, this Newport inn is a great escape for book lovers. From $90 in spring; $120 in summer. 267 N.W. Cliff, Newport; sylviabeachhotel.com

The Waterfront Depot: Popular spot right on the Siuslaw River, in the old train station, with arguably the best seafood on the West Coast. 1252 Bay St., Florence; thewaterfrontdepot.com

Local Ocean Seafoods: Against a backdrop of ocean and harbour views, the fish market and restaurant both serve up fresh catch off the boats. 213 SE Bay Blvd., Newport; localocean.net

Blue Heron: Known for the brie, it has a wide selection of Oregon’s gastronomical delights. 2001 Blue Heron Dr., Tillamook; blueheronoregon.com

Blackbird: A tiny spot by a well-regarded chef, serving local fare with a touch of Portland. 503 Laneda Ave., Manzanita; blackbirdmanzanita.com

Bowpicker: Much sought-after fish ’n’ chips in a parking lot across from the Maritime Museum. Corner of 17th & Duane St., Astoria; bowpicker.com