I should have heeded the advice in my guidebook: “Young males can be unpredictable in the rutting season in fall.”

I was trying to take a selfie with a doe in Nara Park. But as I bent over, angling for the perfect shot, a jealous stag head-butted my backside and sent me sprawling onto the sidewalk, much to the delight of onlookers.

After the laughter died away, a British traveller confided, “One just bit my bum and I’ve got a red mark now. It hurts!” 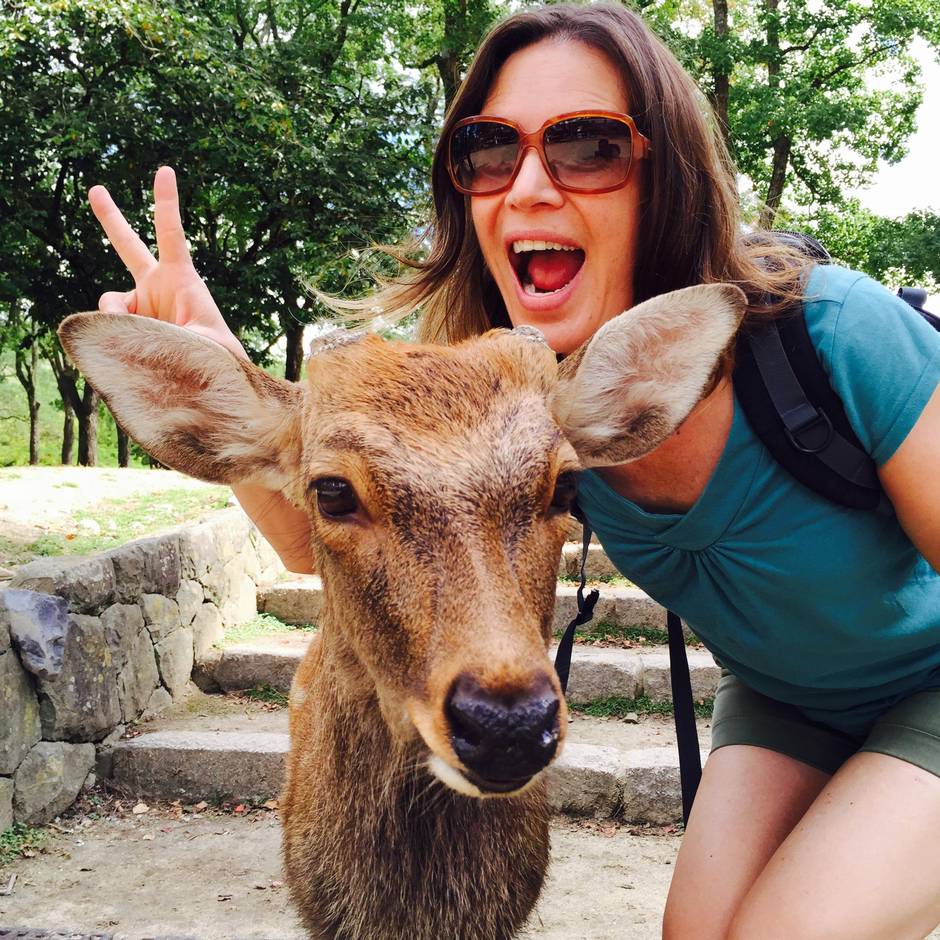 Such aggression from creatures that usually turn tail and flee at the first sign of humans is disconcerting to say the least. But in Nara, Japan, deer are considered “national natural treasures” and can get away with such shenanigans.

Legend has it that way back in 768, a white deer carried a Japanese deity all the way to Nara from Ibaraki, north of Tokyo; as a reward, all of the deer in Nara were bestowed with divine status (they are no longer considered sacred, but are still cherished). As a result, the animals developed into divas over the intervening millennium and are accustomed to being hand-fed by locals and visitors. Head-butting and nipping are just effective ways to communicate hunger: They are always on the hunt for food.

Feeding the deer has become more popular than the ancient temples and shrines in this former capital and cultural centre of Japan, which is a UNESCO World Heritage Site. More than 1,200 stags, does and Bambis wander the surrounding parkland, looking cute and docile. Their presence implies a harmonious balance between nature, spirituality and civilization, but the scales are tipped steeply in the ungulates favour. Deny them offerings of shika senbei (special deer crackers made of rice) and pandemonium ensues. 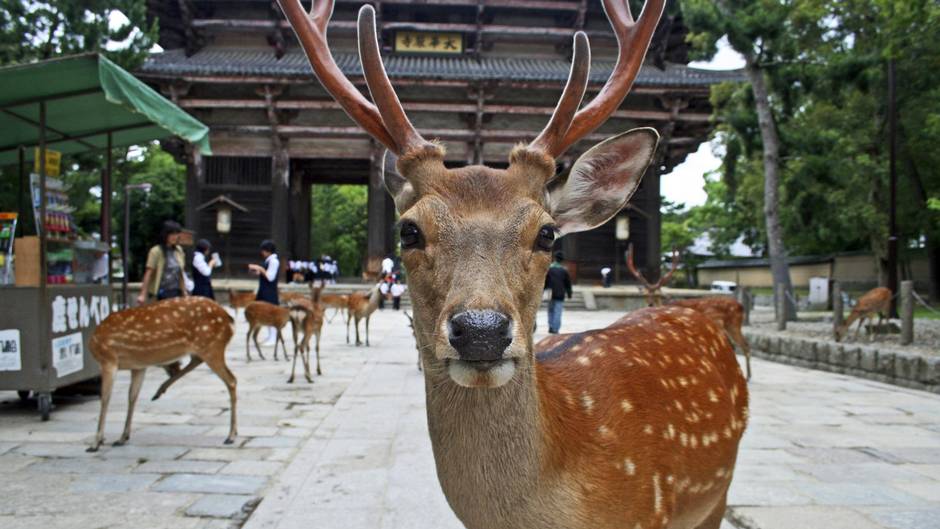 The dear at Nara Park are considered ‘national natural treasures’ and are accustomed to being hand-fed by locals and visitors. (iStock)

The ever-observant animals trot over to sniff tourists for treats. The more polite deer bow their heads graciously to request a cracker, while their ruder cousins thrust their heads menacingly toward the midsections of passersby. The smartest herd members wait patiently by the many shika senbei kiosks scattered throughout the park for tourists to shell out 150 yen (about $1.50) for a cracker packet. Prominent signs outline rules, urging visitors not to litter, hit or chase the animals, or feed the deer anything other than shika senbei (stock tip: invest in a company that makes shika senbei).

As my husband and I made our way toward Todai-ji, a famous Buddhist temple that’s the second most popular attraction in Nara, deer drama unfolded all around us. Groups of Japanese teenagers timidly fed them shika senbei, only to panic, drop the crackers and flee when too many deer charged over demanding sustenance. School children ran from them, laughing and shrieking. Farther down the path, a small child sobbed in terror while her mother carried her away from a small herd aggressively stalking the pair for food. A few aspiring deer whisperers managed to stay calm, patiently doling out cracker pieces to antlered petitioners.

We made it through the deer gauntlet – and deftly negotiated the many deer droppings being swept up by a local poop scooper – and passed beneath Nandaimon, the Great Southern Gate that forms a grand entrance to the Todai-ji temple complex and makes an effective deer barrier. Inside, burning incense calmed my racing heart, and the quiet, manicured gardens surrounding the Buddhist temple helped restore peace and tranquillity to the day. 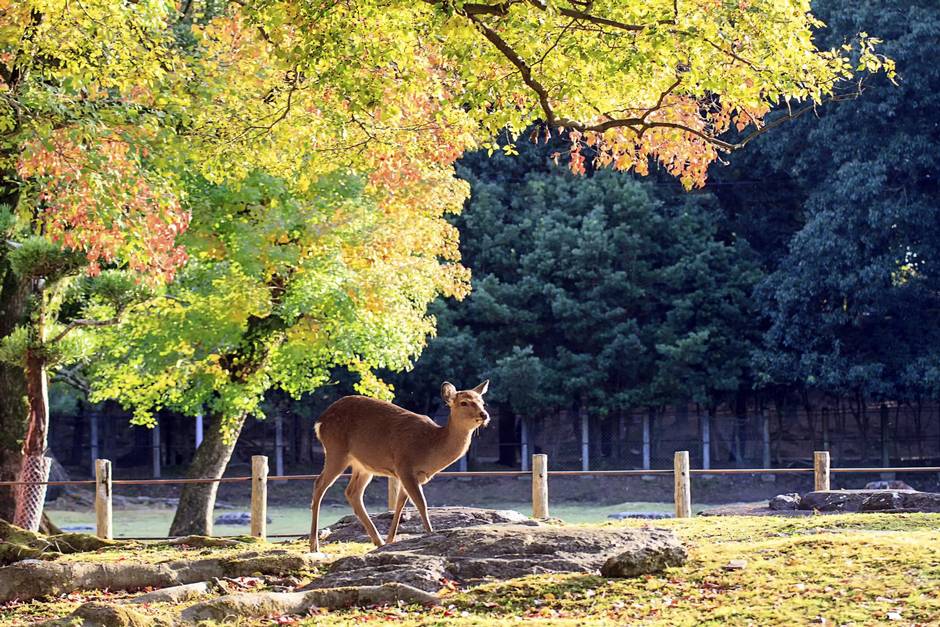 Deer in Nara Park, Japan in the Fall. (iStock)

We stared in awe at Todai-ji, one of the largest wooden structures in the world, and equally so at the towering bronze and gold Daibutsu statue resting within. The 15-metre-high Great Buddha, which is considered one of Japan’s most impressive sights (right up there with Mt. Fuji), commands attention and evokes serenity. The statue sits in sharp contrast to the once-divine, four-legged sentinels outside the grounds that command attention, yet evoke anxiety.

After long moments of meditative calm, we ventured back into Nara Park to face our does once again, and to try our luck with some shika senbei. I wish I could say my time at the temple prepared me to meet the deer in a Zen-like manner and patiently pass out treats. But the truth is, at the first sign of another head-butt, I dropped the crackers and ran (so much for enlightenment) while they gulped down the offering, wrapper and all.

If you go: Nara is a 45-minute Japan Rail train ride from either Osaka or Kyoto stations. From Nara station it’s a 20-minute walk (or take the local bus) to Nara Park and Todai-ji.