Over years of frequent flights from Montreal to her parents' home near Columbus, Ohio, Katie Thrasher and her husband, Ted, have the family routine down. Their children, Lauren, 3, and Adam, 6, each wear a backpack overflowing with books, DVDs and videogames. Each gets a new toy to unwrap during the flight as a distraction.

There's a change of clothes for all and plenty of wipes, in preparation for the inevitable puking nightmare.

"Every airplane trip that doesn't include vomit is a fantastic one, and every trip that they're well behaved and there's only one vomit incident is still pretty good," says Thrasher, 33. She has learned to lean on the kindness of strangers at times such as an especially bumpy landing a year ago, when both children threw up, over and over.

"People were handing me tissues, sick sacks, newspapers; it was all over the floor, we could not put our feet down, it was just massive," recalls Thrasher, who emerged unscathed, having mastered the technique of "spinning my children and getting out of the way: You do not throw up on Mommy."

But not all strangers are kind. According to British pollster Skytracker, which surveyed 2,000 frequent fliers this summer, 59 per cent favour creating a "families-only" section aboard airplanes (with calls for an in-flight nursery as well); 70 per cent prefer to sit "as far away as possible" from children, and nearly a quarter would ban children from the air altogether.

Parents like Thrasher say they have come to expect dirty looks, at a minimum, from fellow fliers or airport staffers whenever children act up - or even when a child is simply acting his age.

Then there are the more extreme examples of passenger pushback: After a three-year-old boy's screaming during takeoff allegedly left Jean Barnard bleeding from the ears and "stone cold deaf," the 67-year-old American sued the airline in question, Qantas, which settled confidentially in July.

An e-mail Barnard allegedly wrote to her travel agent, tabled during the pre-trial phase, made the plaintiff's feelings plain: "I guess we are simply fortunate that my eardrum was exploding and I was swallowing blood," Barnard wrote. "Had it not been for that, I would have dragged that kid out of his mother's arms and stomped him to death."

But do air travellers who endure shrieking infants, airsick toddlers or worse generally have a fair gripe? And could setting aside space within the aircraft for families help?

Air Canada, WestJet and Porter Airlines all say there are no specific seating rules for children - other than, by law, they can't sit by emergency exits - and have no plans to create a "family section."

Apart from potentially ghettoizing families, special seating for them would be difficult to price (should airlines charge more for those seats or less?) and impractical. "What happens when the section gets booked before the rest of the plane, and I need to buy five seats for my family? Would I be forced to travel on another day?" argues Sada Reddy, 45, a Montreal mother of three. She lived through her son Kiran's transoceanic meltdown a few years ago, during which the then-14-month-old cried virtually non-stop to Rome.

Passengers sometimes have to be moved around to balance weight on an aircraft, so family sections don't make much sense, according to retired flight attendant Tracey Morey.

In 20 years flying with Air Canada Jazz, Morey, 43, from Vancouver, never witnessed a single confrontation between passengers; on the contrary, parents of unruly children were usually the ones heaping scorn upon themselves.

When babies' ears become painfully blocked because of cabin-pressure changes or an exhausted child refuses to buckle up for landing, soothing words, a drink, a snack, a toy or a snuggle usually do the trick, she says.

Seating assignments can often be juggled at the gate - say, if a singleton wants to be far away from pint-sized passengers, or a family's reservation has inadvertently split them apart. And some airlines let you reserve seats ahead of time for a fee (tip: for flights overseas, secure the crucial bulkhead row with extra wiggle room).

Flight attendants can also exercise some discretion to let children stay asleep until minutes before they are required to belt in for landing.

When all else fails, there's always the beer and wine beverage cart as an adult distraction.

Other than that, in an age when people often reserve seats online, there isn't much to do except suck it up or get off the plane - or sue - if one's seatmate turns out to be a mischievous toddler with an eardrum-popping scream.

Parents can be unruly too. During a flight years ago, when Reddy - who was childless at the time, and travelling on business - politely asked a mother to stop her child from throwing toys in Reddy's face, she was told to "get a life!"

Although the woman's husband apologized, Reddy switched seats - and never forgot the mistreatment. Now, she admits, "I don't even want to sit near kids that are crying, unless they are my own."

Is this the most obnoxious invention in air travel?
December 17, 2010 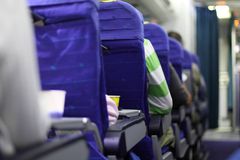 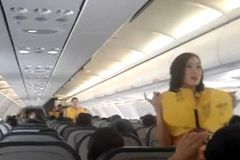