As flight attendant Steven Slater slips into a media lull between his dramatic exit and a rumoured reality show, those who fly frequently are talking about the effects attendants can have on a flight, both positive and negative, as they create and respond to circumstances at least nine kilometres up in the air.

I heard about Bob when Sharon Collachi, a Fresno, Calif.-based mental-health business consultant, posted a comment online about this flight attendant on a US Airways flight between Tampa and Phoenix. Within a couple of days, several more commenters came forward with their stories about Bob Spinner, using words like "stellar" and "absolutely awesome" to describe their experiences.

"Once the doors were closed, he stood at the first row and introduced himself, and told us what we could expect from him," Collachi wrote in her post. "On a four-plus hour flight, he intended to be on his feet the entire time (and he was), so no one should need to hit their call button." If anyone did, he said he would treat it as an emergency and drop everything and rush over.

"He really made you feel special," Collachi told The Globe and Mail, "like you were flying on a private jet."

Telecom salesman Juan Alvarez was not so lucky on one of his regular 2 a.m. flights from Sao Paolo to Lima.

"There was a family in the row behind me, a mother, a kid and the father," he recalls. "The kid was just completely out of control, kicking the seats, throwing things. A bunch of us started complaining that it's a night flight, we were supposed to be sleeping. A stewardess came to tell them to be quiet. When she left, the mother rolled up a newspaper and started whacking those of us who complained. I had earplugs in and was trying to ignore it. Another guy in my row was sitting in front of the father and they started exchanging words."

Words turned to shouts, and shouts turned to punches. "I went back to the bathroom and told the flight attendants there's an altercation, and they said, 'Yes, we know about it, we know about it.' " But they remained seated in the galley, chatting amongst themselves. He went back three more times, as did the other passenger in his row and some people behind the family. "I'm guessing six or seven people complained," Alvarez says. The fight eventually subsided on its own, but the sleep Alvarez, and any number of other passengers had counted on, was out of the question.

Books by and about flight attendants over the years point to the evolution and ultimate confusion over their role. Titles like Coffee, Tea or Me, Sex Objects in the Sky and Around the World in a Bad Mood highlight the basic difference of opinion: Are flight attendants there for our pleasure or our protection?

Some crews lean toward protection at the expense of pleasure and get snippy when passengers call them on it. "I have lots of friends in the service industry," says WestJet flight attendant and CUPE union rep Michael Reed, "but [unlike flight attendants]they don't have to qualify every year and pass exams to keep their jobs."

The ideal seems to be a little bit of both. That's what 15-year Air Canada vet Katherine Thompson thinks. She's happy to be the high-flying cocktail waitress but as a flight attendant, and therefore one of the most frequent fliers in the world, she knows how often the more serious part of the job kicks in. "It's so often, you wouldn't believe," she says, recalling one incident several years ago when a passenger on a long-haul flight to Canada came to her in the galley. "She was holding her chest, and when she moved her hand, the front of her chest was covered in blood." She had just had breast cancer surgery and all her sutures had ruptured. Thompson found a doctor, re-arranged the seating to keep the woman and the doctor in her constant view in case the woman's condition worsened, and then continued serving drinks. When the plane landed, the woman was met by paramedics.

"Flight attendants are the last line of security and safety on board the aircraft right now," she says. "We're the first responders, and if you look at the underwear bomber, and the shoe bomber, you'll see the role we played in those situations. We have to be situationally aware at all times.

"But it's like I say to the pilots," she says: "I like the flights where I'm an air hostess and you're a bus driver."

Do you have feedback? E-mail roadwork@globeandmail.com. 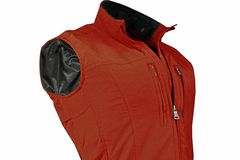