On the banks of the Mtk'vari River, in the heart of Old T'Bilisi, a neighbourhood of clay domes exists; odd structures that appear from the outside to be the oversized lids of Moroccan tagines. Buried beneath is a maze of ancient baths and saunas dating to the 5th century. And within the bowels of these legendary baths sits a single barber's chair.

A shave at the hands of Aydin the Azerbaijani barber is part of the routine for the throngs of men who gather, every day, to soak and socialize. It was my friend Stefan Tolz, a German filmmaker, who suggested a visit to Aydin, and I needed no persuading. What better way to top off a two-month horse trek than by having my unruly, sun-bleached beard lopped off in a ceremonial straight-edge shave?

The prospect of "being shaved," as opposed to "shaving oneself" holds a deep, instinctive appeal for men; part ceremony, part pampering. Amid the frantic world of modern skin care – where it only seems a matter of time before we are rushing out to buy 10-blade units – the horse-hair brushes and gritty soap cakes that my father once favoured have faded to antiquity. And proper razor blades – those dangerous looking square flakes of metal individually wrapped in paper? They are only used now for removing paint from windows.

Stefan led me through darkened corridors, past shiny private saunas frequented by foreigners and families, to the stained and fading public bathes. Two unsmiling Russians – gold teeth, thick forearms and even thicker bellies – guarded the entrance, exacting an entrance fee (less than a dollar) that covered locker, towel and a massage. The change room beyond was so crowded that taking off my shoes was a challenge; jamming my buttocks into a naked stranger inevitable. I tried sitting on a bench, but that left me uncomfortably close to a sea of jiggling privates.

Bare at last, I passed through a small door into a grand tiled room. Rays of light cut down from slit windows, sabres of light dancing in the steam. A huge tub, the size of a squash court, sat at one end, overflowing with scalding water. Lines of showers were suspended from the ceiling, and men stood below them, washing and talking. Saunas, heated by the underground steam, were nested along the opposite wall. But my eyes locked onto four bed-sized slabs of marble, where massage attendants – bulky men, identifiable by their tight blue swimming trunks – were busily slapping and clapping pink bodies, wrenching arms and legs in directions it appeared they were never meant to go. I waited my turn apprehensively, and was soon motioned forward with a grunt. Lying face down, naked, on a stone bed, did not appear comfortable, but within minutes I had drifted asleep as a stout man smacked my back. A vigorous rub with a cloth more abrasive than sandpaper awoke me, and soon I was waddling toward the showers like a spit beetle, buried in a cocoon of suds.

After a quick soak, it was into my clothes and off to the barber. Before leaving, Stefan pulled Aydin aside. "This man is not my friend," I heard him whisper horsely. "I just meet him today. Make sure you charge him FULL PRICE."

It was an odd comment, but I knew Stefan had to distance himself, for if Aydin suspected we were friends he would insist on providing complimentary services. And goodness knows, Aydin needed every penny he could get. The barber had fallen on tough, tragic times. After the unexpected passing of his wife, his mother had died a week later, leaving the man alone, caring for an epileptic son on a hair-cutter's salary. The cost for my shave: $1.50.

No sooner had Stefan left, than Aydin was dancing about my chair, thrilled by the ragged prospect sitting before him – a true bird's nest of a beard. He talked a million miles an hour in Azerbaijani, thin arms flying around like an orchestra conductor's. He dried the beard with a blower, next sheering it to stubble with an electric clipper. And then the magic began.

As Aydin extracted a single paper-wrapped blade from a tin on the counter, and attached the lethal implement to his bone-handled razor with a flourish, it became abruptly clear why an old-fashioned straight-edge shave still matters. And why the act carries such universal heft for men, ranking among such hallowed experiences as smoking a Cuban cigar or cruising the Pacific Coast Highway on a motorbike.

Sure, the pampering that comes with such a shave is nice – the spidery scalp massages and cheek slapping and splashes of fine-smelling balms – but the heart of the experience lies in the vulnerability it demands, the complete trust exacted. For the shavee must allow the shaver to run a razor across some of the places you'd least like to be cut: your face (think life-long disfigurement) and neck (where a slip is potentially fatal). Exposure to oblivion is rare in today's world, and oddly bracing; the feeling akin to standing at the edge of the subway platform as the train races in.

Aydin worked deftly, whizzing the blade across my skin, wiping foam and whiskers on his forearm with each pass. Through it all, I focused on staying still. With a deft pinch and twist of the nose, Aydin swiped the hairs off the upper lip. With a pull upward on the cheek, he slashed across my jawline. Next he was sweeping down my neck in long, assured strokes. Before I could flinch, Aydin had breezed past the Adam's apple, his strokes as fast and furious as a wood chopper. Not a drop of blood was spilled.

Soon a parade of colognes and balms were being poured from bottles that crowded Aydin's linoleum counter. Minutes later I stumbled into the bright T'Bilisi sun, feeling 20 years younger. The change in my appearance was so vast that my two young boys didn't even recognize their own dad. (Fear not: They eventually allowed the whiskerless-me to kiss them again.)

Sure, I paid full price for Aydin's shave, but it's not often that one derives such anticipation, pampering, pleasure – and even a glimpse of mortality – for a buck and a half.

Two years ago, Stefan Tolz, the filmmaker who introduced me to Aydin, bought the barber a car. "It was something I waned to do, I had to do," explained Stefan, who has been a customer for years. "I know it doesn't make sense. But it doesn't have to. It was my heart speaking." Stefan made a short film documenting the car's unlikely journey from Germany to Georgia, culminating in the moment he arrives an hands the keys to Aydin. The look of disbelief that melts to joy as Aydin grasps what Stefan has done is raw and human. "Worth every penny," Stefan says.

To watch the video visit tgam.ca/barber. 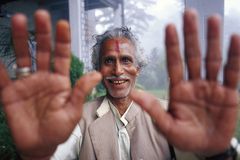 Afraid of horses? Fix that by travelling with one (or three)
October 28, 2011 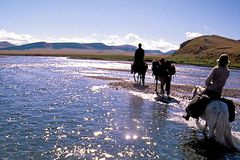 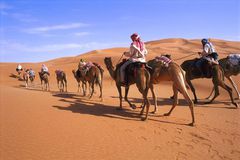