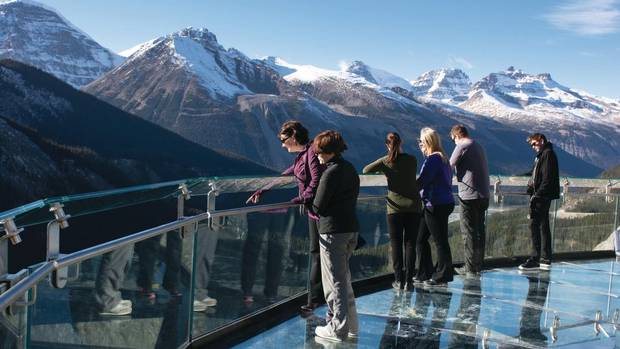 I wouldn’t usually accept this invitation when standing on an alpine lookout 280 metres above a rushing river. But I jump anyway … and again, and again. Turns out my guide and I both have to keep hopping to achieve the desired effect: Making the new Glacier Skywalk in Jasper National Park tremble like a suspension bridge.

This isn’t the first thrill I encounter on the award-winning catwalk, a cantilevered structure that juts 30 metres out from the cliff face. It takes me a minute or two to venture out onto the shiny glass floor, which, like the ones at the CN Tower in Toronto and Grand Canyon Skywalk in Arizona, delivers the disconcerting impression of stepping into thin air. It’s also one of the few lookouts in the world where visitors will immediately stare at the floor, rather than out a window or over a railing at the beauty beyond. 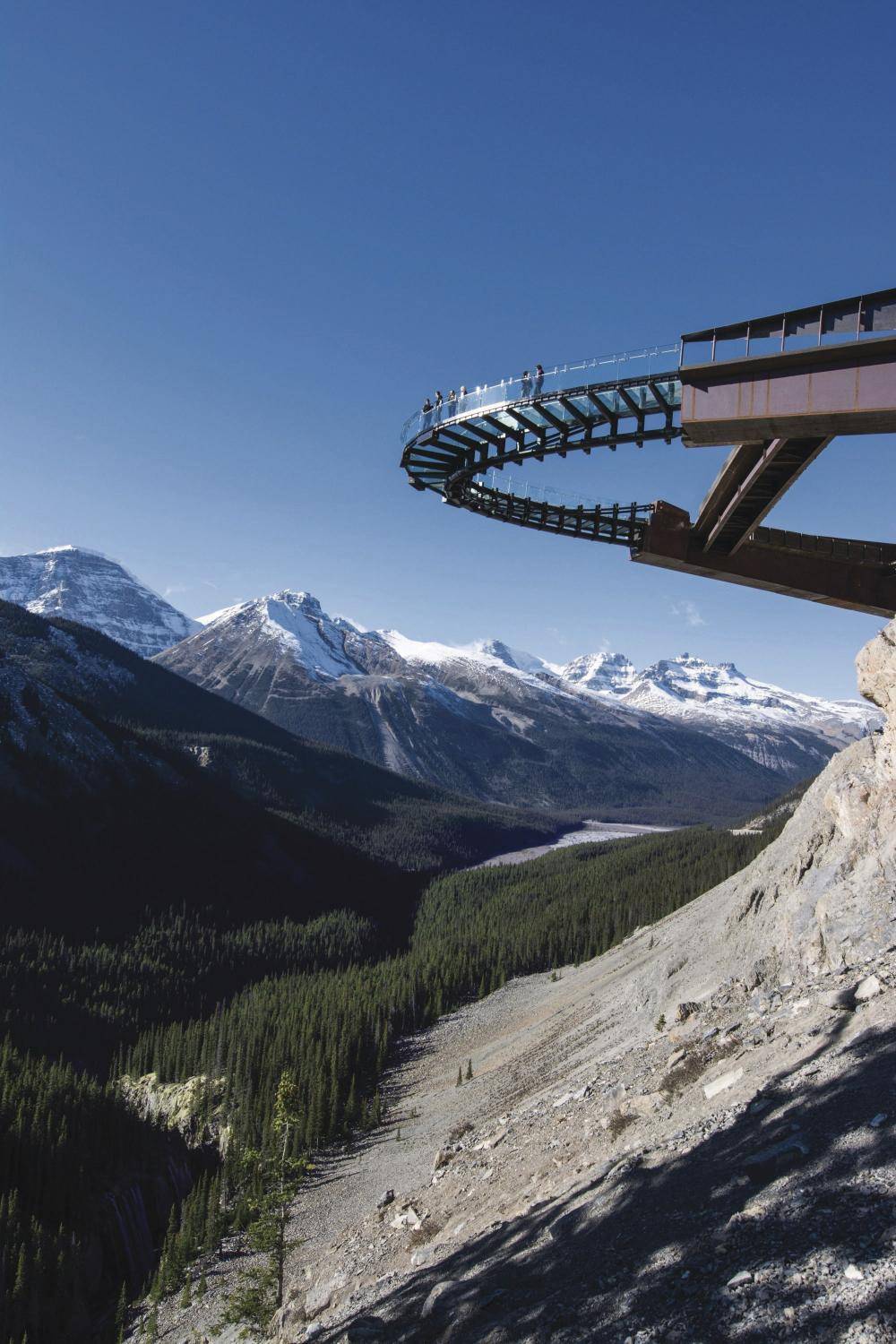 Here along the Icefields Parkway, the 230-kilometre ribbon of asphalt linking Banff and Jasper, that beauty is world-renowned. Each year, about a million travellers come by car, bus and bike to admire its glacier-clad peaks, turquoise lakes and rushing waterfalls. Thousands of these visitors venture deep into the surrounding wilderness, but they are the exception. According to Parks Canada, less than a third leave a paved surface.

Fostering deeper connections with the outdoors is one of the main goals of the Skywalk, explains David McKenna, president of Banff-based Brewster Travel Canada, which owns the new attraction. “We’re luring people into nature in a very controlled, safe environment that also educates and cultivates respect for the park,” he says, adding that the Skywalk allows visitors to explore independently and “take a step into the wilderness that feels a little bit daring.” 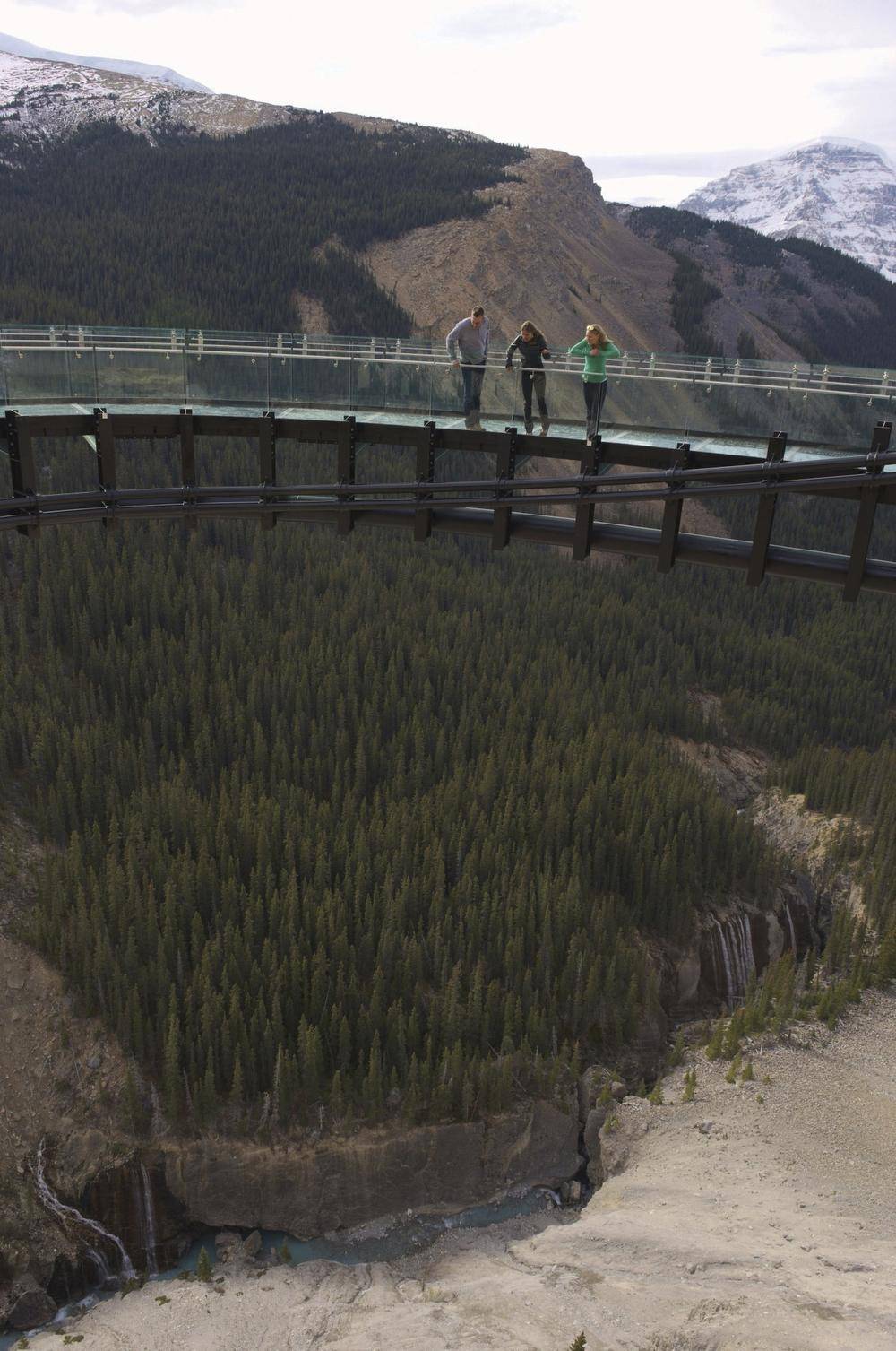 Still, the seven-year project has drawn plenty of opposition, even after Parks Canada approved Brewster’s environmental assessment in 2012. Given the project’s scale, visibility and $21-million price tag – McKenna calls it “the first significant attraction to be built in a mountain national park in 50 years” – this controversy is unlikely to disappear any time soon, what with a tiny percentage of Jasper zoned for outdoor recreation projects like the Skywalk.

The 169-page assessment examined factors ranging from the migratory patterns of mountain goats and bighorn sheep to the use of solar power at the site, which occupies the same stretch of roadside as the Tangle Ridge Viewpoint it replaces.

The Skywalk also aims to reduce traffic congestion and wildlife woes by using free buses to shuttle as many as 600 visitors an hour from the nearby Columbia Icefield Glacier Discovery Centre. Since opening in 1996, this three-storey lodge has also been the departure point for guided hikes and the tractor-tired Terra Buses that have carried visitors onto the Athabasca Glacier for decades.

That 300-metre-thick slab of ice isn’t quite visible from the Skywalk, but no matter: Directly under my feet, the Sunwapta River surges past striated cliffs, while dozens of frozen waterfalls, visible through the glass safety railings, catch the late-morning sun as they cascade down the canyon’s far side. To the right, a procession of peaks stretches to the horizon. To the left, a snow squall envelopes the Andromeda and AA glaciers, Athabasca’s neighbours. Looming up ahead is Snow Dome, Canada’s only hydrological apex – where the meltwater from this 3,456-metre summit eventually flows into either the Pacific, Arctic or Atlantic oceans. (At least, that’s what it said on one of the interpretive stations along the 400-metre walkway leading to the lookout.) 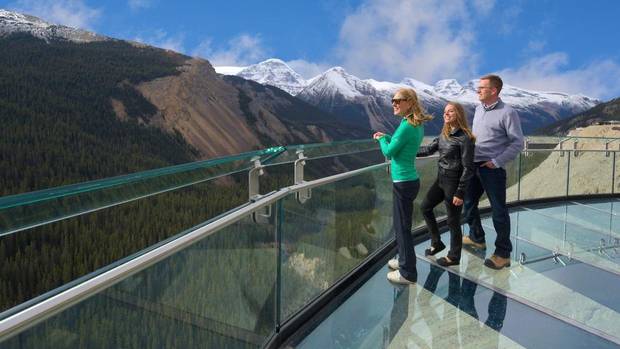 The only thing missing during my visit just days before the official opening is an overview of the stunning architecture and engineering involved, though I’m told iPad-equipped stations are coming. In 2011, then Globe and Mail architecture critic Lisa Rochon called the design “audacious” and “heart-stopping” – and that description bears out now that the observation deck has been built. It’s constructed of slowly oxidizing steel that echoes the iron-rich cliffs, with massive trapezoidal box girders supporting the glass floor. No wonder the creation won a World Architecture Festival Award for Alberta-based Sturgess Architecture and Read Jones Christoffersen Engineering.

Accolades and technical wizardry aside, the design is rooted in old-fashioned fun. The Skywalk had to “be scary,” says architect Jeremy Sturgess. “There are boxes under the glass floor that manage the wobble, but they’ve been tuned with metronomes to maintain a certain level of angst.”

Visitors can muster their courage on a bridge – informally dubbed the “chicken walk” – that spans the lookout’s inside edge, or in a small wooden amphitheatre designed for reflection, relaxation and catching some rays.

Having conquered my own jitters, I head back toward the bus parking area. Seen in profile from the walkway or Icefields Parkway, the Glacier Skywalk is all but invisible, its glass and weathered steel blending into the pine-covered mountainsides.

“Heroic yet modest” – as Sturgess describes the project – just about sums it up. 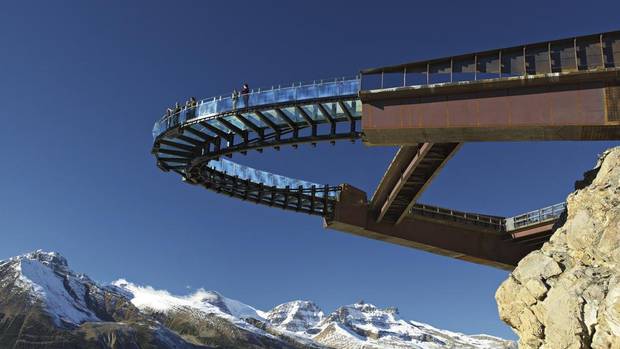 Now open, the Glacier Skywalk is a one-hour drive south of the town of Jasper and 2 1/2 hours north of Lake Louise. There’s no public parking; rather, free round-trip shuttle buses depart the Columbia Icefield Glacier Discovery Centre every 15 minutes. The Skywalk is fully accessible and barrier-free, and open until Oct. 19. Visitors can use the viewpoint area for free, but must pay $24.95 (adults) and $12.50 (children) to access the Skywalk. Tickets are available at both the Discovery Centre and the Skywalk. glacierskywalk.ca; 1-800-760-6934

Brewster Travel Canada packages the Skywalk with stays at the Glacier View Inn, which has basic but fully equipped rooms located right in the Columbia Icefield Glacier Discovery Centre. Rooms from $99. explorerockies.com; 1-800-760-6934

The writer travelled courtesy of Travel Alberta. It did not review or approve this article.