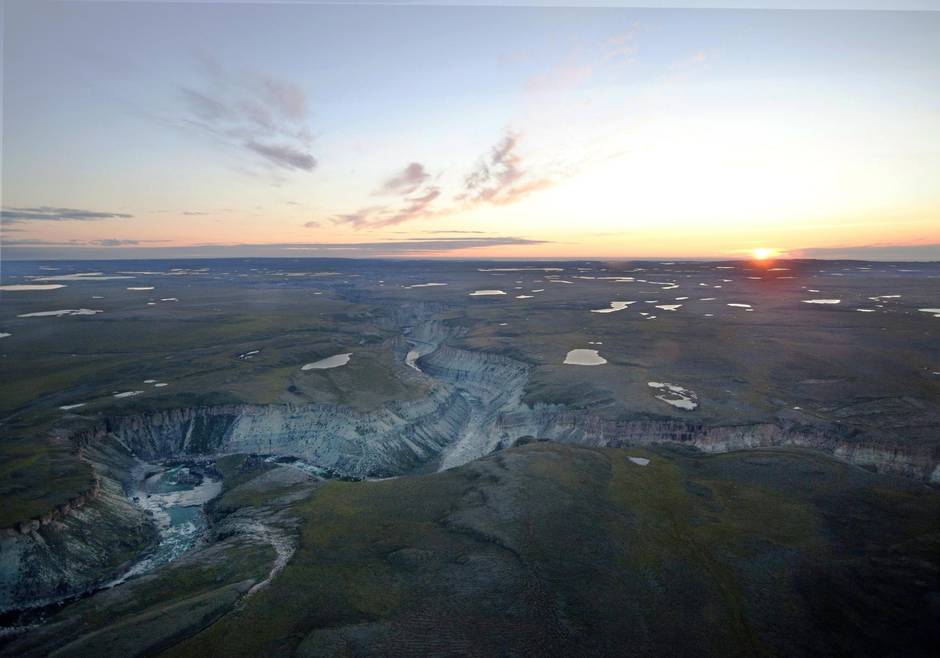 Tundra and canyons in Tuktut Nogait National Park. (Photos by Charla Jones for The Globe and Mail)
Mysterious North
Few places in the world can push and pull you from agony to ecstasy

Looking at a map of Canada, most of us live huddled around the border of the United States; above us, there’s all this space, this land – sometimes referred to as Canada’s Great North. It remains a mystery to most of us; a romanticized concept of what it means to be Canadian. I don’t think I’m alone in my longing or curiosity to visit.

Glenn Gould put in this way in The Idea of North, a 1967 radio documentary. “I’ve read about it, written about it, and even pulled up my parka once and gone there. Yet like all but a very few Canadians, I’ve had no real experience of the North. I’ve remained, of necessity, an outsider. And the North has remained for me, a convenient place to dream about, spin tall tales about, and, in the end, avoid.”

Last summer I had the chance to visit Tuktut Nogait National Park, which is located 170 kilometres north of the Arctic Circle in the Northwest Territories. It is the country’s least visited national park, and in early August of 2014, I was the eighth and last visitor of the year.

In preparation for my trip, Eric Baron, the park’s visitor experience manager, said: “Be prepared. It’s cold up here.” I was soon to learn just how cold August could be. 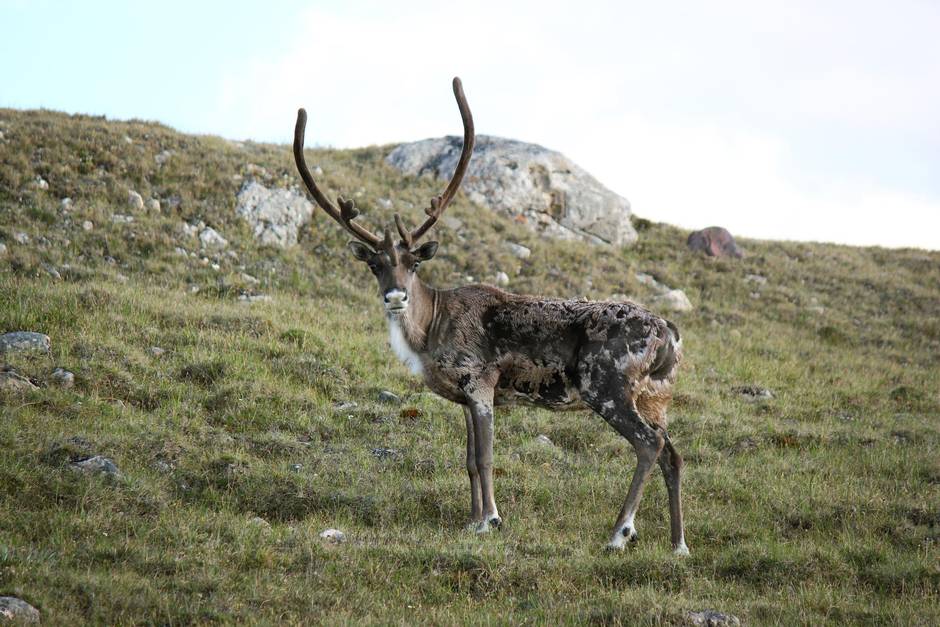 The park is also a calving ground for the Bluenose-West caribou. 'Tuktut nogait' means 'young caribou' in Inuvialuktun. (Photo courtesy of Parks Canada)

To reach Inuvik, I flew two and half hours from Yellowknife. To reach the park, we then flew two more hours in a Twin Otter float plane from Inuvik. The plane was loaded with several barrels worth of gear. There are no facilities in the park, so everything must be brought in. Food and drink, tents for sleeping, tents for cooking, a tent for the toilet and, since nothing foreign can be left on the land, bags for human waste.

To get to the park:

Some direct flights to Inuvik are available from Edmonton, Vancouver, Whitehorse and Yellowknife. Travellers can also drive the Dempster Highway to Inuvik.

From Inuvik, charter a flight to the park from North-Wright Airways or purchase the six-day, self-catered base-camp trips from Parks Canada for $3,975 a person. Price includes return flight into Tuktut Nogait National Park, Parks Canada guides and the services of two Inuvialuit cultural hosts, backcountry fee and airport shuttle to and from Inuvik airport. This year’s trip runs Aug. 3 to Aug. 8.

Two hours later, our floatplane landed on One Island Lake, which would be our campsite. Standing on the shore stood Ruben Green and Jonah Nakimayak, our two cultural hosts from nearby Paulatuk, wearing fur-lined coats and rain boots. They helped secure the plane to shore and greeted us warmly as we jumped off. Both had high cheekbones and brown skin weathered by a lifetime of exposure to the elements. I looked forward to hearing their stories.

We set up our tents and wrapped a bear-exclusion fence around the camp (grizzlies and black bears are resident in the park), then settled in for the night, or what the clock told us was the night since we were in a period of 24-hour daylight.

Eric was right. It was cold. I wore two hats, a sweater, long johns and two pairs of wool socks and slept in two sleeping bags, one tightened to cover the maximum amount of my face but still let me breathe. In my cocoon, in the light of night, I listened to the wind rolling across the tundra and thought of dinosaurs roaming the Arctic 240 million years ago.

The next morning we set out for a hike. I liked the people from Parks Canada, and we bantered like a close-knit family. But Jonah and Ruben were the real treasures. They sauntered across the tundra as though they were strolling through their backyard. Reuben, 58, was often quiet, but Jonah, a few months shy of 70, made jokes and rolled cigarettes. Both of them seemed peaceful. I wanted to know them better, be around them, listen to them. It was obvious they belonged here; they were a part of the ecosystem, at one with it. 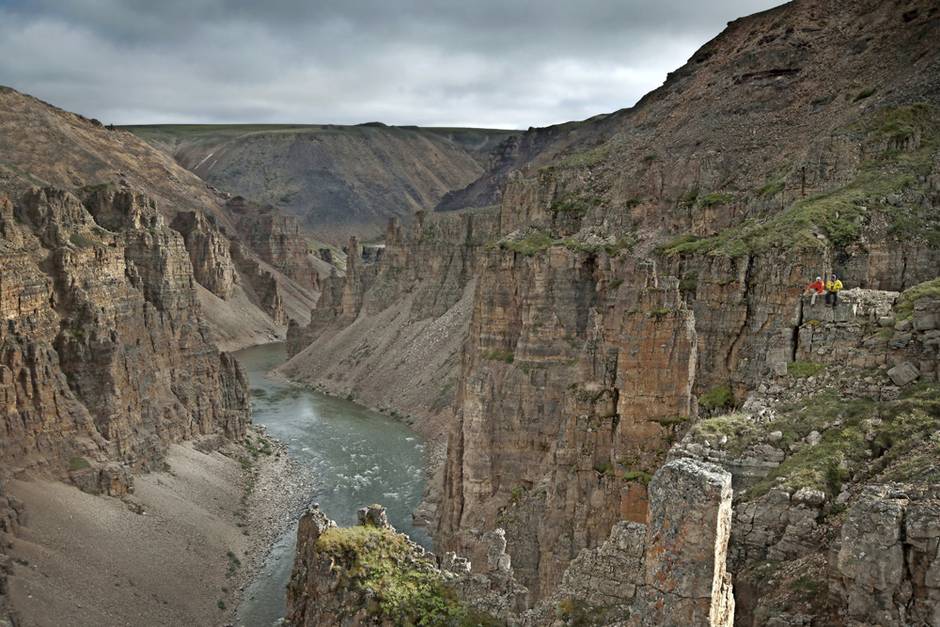 Visitors sit at the edge of a canyon cliff overlooking the Hornaday river in Tuktut Nogait National Park.

There are more than 500 cultural sites in Tuktut Nogait. Only a handful have been excavated, but of those identified, the dates range from 100 to 40,000 years old. “Many Caches” is a picturesque spot overlooking the Hornaday River. As the name suggests, there were lots of 200-or-so-year-old underground caches once used by the Copper Inuit to store caribou meat. Old caribou bones lay close by and further down the site, a grave, thought to hold the body of a Copper Inuit woman. “They would bury all their belongings, even their seeds would be buried on top of them in the grave to take with them to the afterlife,” Ruben explained as he sprinkled some tobacco (a sacred plant connecting Earth to the heavens) in the air above the remains.

The following morning, I awoke sweating. The heat of the Arctic sun streamed through my orange tent as I unravelled my elaborate bedding and layers of clothing. That day T-shirts replaced parkas and clouds of mosquitoes replaced gusts of gale-force winds.

Warm or freezing, this landscape was always an intense experience. There were times when the park was more than a mere disconnection from the modern world. With more than 16,000 square kilometres of the natural world, untouched by the trappings of man, it felt like a different planet. 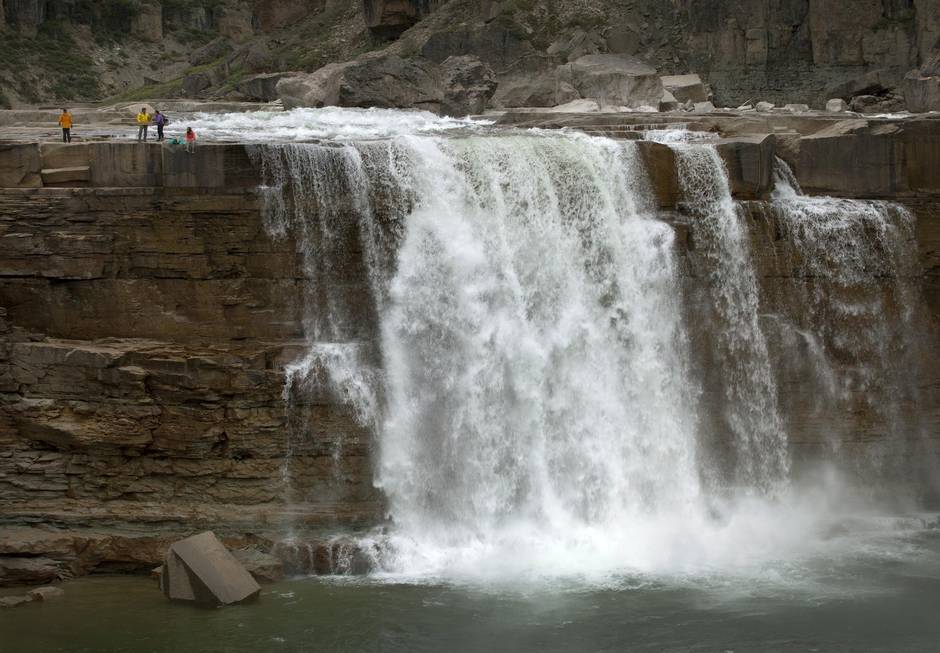 With a helicopter, the landscape opened up even more. I spent hours each day photographing Arctic beaches and waterfalls, flying through canyons, watching Bluenose-West caribou heading south along the tundra, a herd of muskox at a watering hole, a grizzly bear walking with her cub or looking at a nest of peregrine falcons in the cliffs of a canyon. I felt blessed to witness such beauty and stunned that this was my country. How could I not have known about this?

At the end of five days, I was filthy and exhausted. My face hurt from the extreme weather and my body ached. But I was elated. There are few places in the world that can push and pull you from agony to ecstasy: This is one of them.

My visit didn’t answer any existential questions about what it means to be Canadian. If anything, the North was even more mysterious, but I did feel liberated by the vastness and the full force of nature.

And I understood what Ruben meant when he said, “When we’re out here, everything is so real.”