Paul Steele is the director of aviation environment with the International Air Transport Association and former chief operating officer of the World Wildlife Foundation. We ask him about the issues complicating efforts to green the airline industry.

The IATA looks like a good corporate citizen with its pledge to halve carbon emissions by 2050. But are there economic and political reasons for these moves?
First of all, a growing carbon footprint is not a positive thing to have. Another reason is that fuel is the airlines' biggest single cost driver. Anything the industry can do to reduce oil burn has a direct economic benefit in terms of reduced operating costs. But you also have the direct environmental benefit. For every tonne of fuel we don't burn, we save 3.15 tonnes of CO{-2}. Look at the oil-price spike last year: The oil market is not really within the control of the industry. Having alternative fuels gives us some balance.

Many airlines urge passengers to buy carbon offsets to compensate for their flights. But some programs have been criticized for collecting a lot of money for meagre results. Should they be supported?
IATA launched an industry standard program with Air Portugal back in June. We believe it sets a sort of gold standard. We only purchase United Nations-certified emission-reduction credits - that means that those projects are guaranteed to have already reduced emissions. There are some tree-planting projects that say buy in today and the emission reduction will come in 30 years time when the tree has grown. You can do that, but we, certainly to start off the program, only invest in those credits that have been certified. Immediately when we purchase those credits we wipe them off the Greenhouse Gas Register so that carbon is registered as having been taken out of the atmosphere. Around 20 airlines are working with us and will be rolling this program over the next few months.

Costa Rica's Nature Air claims to be the world's first carbon-neutral airline because it pays to offset all its emissions. Should other airlines do the same?
Costa Rica is … able to link the aviation emissions with protecting the rain forest. I think that is a good model that could be used in other countries. But it's not the airline on its own that introduced that: It's a collaboration between the airline and the Ministry of Tourism and the Ministry of the Environment. It's a very good example of how governments and the airline industry can work together.

A group called LowFlyZone urges people to pledge to not fly for one year. Are these crazy fanatics, or should people be asking themselves, "Is this trip necessary?"
In some cases, that view is based on misunderstandings. We're not the fastest-growing source of emissions. Many other sectors have been growing faster than us - IT is one very good example. We're not the biggest source of emissions. We're actually a small part of it, but a growing part and we acknowledge that. If people should choose not to fly, that's up to them. But they should make that decision based on pure facts rather than purely an emotional decision. If you are in a developing country, you need access to global markets, you need access to develop tourism, if that's what you want to do, and you want your own people to be able to link with the outside world. So aviation is an absolute necessity for those sorts of markets.

For one month, All Nippon Airways asked passengers to go to the toilet before boarding and calculated how much that would save in carbon emissions. Should other airlines do the same?
I'm not sure that's going to be an International Civil Aviation Organization standard. What this underscores is that airlines have been very effectively looking at every possible opportunity to take weight off the aircraft. That way you use less fuel, you lower costs, particularly during the economic crisis we've been going through. So you see things like thick magazines disappearing from seat backs, you see light weight on the trolley. IATA is working with its over 105 airlines on fuel management, so instead of just filling up the tank to the top every time you fly, you manage the fuel load for the safety factor plus the fuel to get there, so you are optimizing the amount of weight on the plane.

Should governments be doing more to get old gas-guzzling aircraft out of service?
We'd like to see governments providing … incentives to help airlines with the acquisition of new, more fuel-efficient aircraft. In our industry, we buy about 1,400 new aircraft every year and each time we do that we bring more efficient equipment into the fleet. We think governments could actually help the industry, particularly carriers who don't have easy access to the financial markets, to be able to finance fleet renewal by providing the right sorts of incentive, either accelerated depreciation regimes or forms of tax credit for fleet renewal. 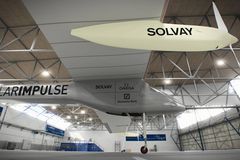