In a hilarious scene in the new Vince Vaughn comedy, Couples Retreat, four couples are asked to line up - guys facing girls - and drop their clothes.

"Remove your masks. Undress," instructs Monsieur Marcel, a Speedo-clad relationship guru played by Jean Reno. Now facing each other in underwear, one of the poor sods (stand-up comic Faizon Love) finds himself in the precarious predicament of having forgotten to put skivvies under his shorts.

"Is his junk out?" Vaughn's character, Dave, asks his wife, Ronnie (Canadian Malin Akerman). "Okay, now it's a party."

Welcome to the fictitious Eden - a 13,000-square-foot tropical paradise where couples who have lost "the spark" come to stretch their limits, release their troubles and (literally) drop their guard - all in the hope of renewing bonds and nurturing neglected partnerships.

At Eden (depicted by the St. Regis Bora Bora Resort), couples can stay only if they participate in compulsory couples therapy sessions, which kick off each day at 6 a.m. In reality, the St. Regis - with its luxurious straw huts perched over aqua-blue water - is undeniably romantic and restful. But it offers no remedial courses for relationships in need of repair. "I call it Cloud 8," says Akerman, who shot for a month with the cast and crew on the white-sand beaches of Moto Piti Aau (which means "two hearts" in Tahitian). "Because it's that close to heaven."

Does a place like Eden actually exist?" muses Akerman, who was born in Sweden but grew up in Toronto. "I'm not sure. The concept [in the film, which opened in theatres yesterday]is a bit ludicrous. But if there are actual couples retreats where you do a bit of therapy and activities together, I don't think that would be the worst thing to do," says the 31-year-old, seen recently as the sultry Silk Spectre II in Watchmen .

"These days, life comes at you pretty fast. It might not be a bad thing to check in, and say where are we at? What's important to us? And make the relationship - not the kids, the job, or whatever - the top priority."

Luckily for couples in search of a little relationship coaching, there are countless retreats (offered for weekends and longer durations) in various spas, health and wellness institutes, and hotel chains around the world. However, none yet exist that are as high-end - and over the top - as Eden, run by a so-called Couples Whisperer.

Some are focused on improving intimacy, others help couples and families heal and strengthen relationships, and there are scores of options for people who want to embrace healthy living and spirituality.

Evelyn Resh, the newly appointed director of sexual health at Tucson's Miraval, says starting Feb. 1, she will be offering intensive, educational programming on sexual health and satisfaction for clients of all ages, as well as for people recovering from serious illnesses or surgeries. "Increasingly, there has been an emphasis, for lack of a better term, on motivational travel. Whether that's ecotravel, adventure travel, or what we offer - which is a vacation destination focused on sensual and sexual health," Resh says.

"I expect we will attract people of a certain income bracket, ranging from their early 30s and into their 70s, who are insight-seeking and want to live satisfying lives; people who are doing serious reviews of their happiness," she says.

In Vancouver, Trevor Warren, a registered clinical counsellor and owner of CoreQuest Counselling Group, has been providing couples weekend retreat workshops for 15 years. Warren explains that these sessions are "all about putting your partner first.

"Many individuals in relationships are all about trying to get their point across without actually listening to one another," he says. "We work on developing a deeper appreciation for the other person's point of view."

Not long ago, he adds, a couple hired him to join them on a boat in the British Virgin Islands to do a week-long, intensive counselling session. "They were a couple in a crisis situation … and I took them through the more effective habits of connected couples. Happy partners, for instance, have a certain degree of reverence and respect for one another."

That experience was so positive, the Vancouver native is now offering a sailing trip in the British Virgin Islands - with room for up to a dozen people - for couples who want to work out the kinks in their relationship.

"The environment is crucial," Warren says. "And certainly the BVIs is the type of place that cultivates a certain energy of relaxation. Life gets busy, and when life gets busy, relationships often go on the back burner. Sensual settings - whether it's Mexico, Hawaii, or the islands - provide the backdrop to play, celebrate and engage in the lushness of life, which is really what couples counselling is all about.

"The pace of life is slower down there. And everything - whether it's talking or lovemaking - is better if you just slow down."

In the film, Eden is a lure that only one of the four couples sign up for to work on their marriage. The rest simply go along for the ride, expecting to opt out of any of the marriage-therapy stuff, which they figure they either don't need (Vaughn and Akerman are happily married with two kids) or are way too late for (the philandering soon-to-be-empty-nesters played by Kristin Davis and Jon Favreau).

"A place that beautiful and expensive would just be too costly to operate," insists Matto-Shepard, who just completed a "Fall in Love" weekend last month at the Sheraton in Sonoma County, Calif. "I would love to do what the movie does," he sighs.

"Most couples know when they go on vacation, that they reconnect with each other. And relationship-building retreats allow you to really let go and settle into yourself."

In the production notes for his movie, Vaughn - recently engaged to Canadian real-estate agent Kyla Weber - says he co-wrote the script (with Favreau) to show that "relationships can be trying … but it's better to love and work on the relationship than not to have it at all."

Co-star Akerman agrees that Vaughn is at a place in his life where his modus operandi "was to put marriage on a pedestal for a change, instead of knocking it down."

She adds that any place that offers couples a moment of quiet reflection is a gift not to be passed up. "My husband joined me on the shoot. He came for five days, and ended up staying 10," Akerman laughs. "It was pure magic." 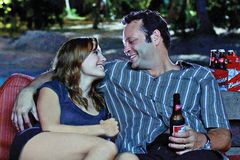