When I first arrived in London eight years ago, a senior Canadian diplomat told me a story about encountering a family in Trafalgar Square, the parents and the children all wearing maple leaf pins.

Ah! thought the diplomat, here are some fellow citizens I can schmooze (he did not put it quite that way). "Hello!" he said to them, or maybe "Bonjour!"

The loonie finally dropped, and the diplomat decided to confirm his suspicions by asking them if they knew where Ottawa was. They stared … well, you can see the end of this story coming like a freight train over the Prairies. "You're not really Canadian, are you?" the diplomat asked gently. The family admitted, shamefaced, to being Americans wearing don't-hate-me camouflage.

Those were the days, eh? When every second backpack you saw in an airport was emblazoned with a maple leaf, even if the person carrying it couldn't tell Wayne Gretzky from Lil Wayne, and thought that beaver tails were something you found in a sex shop. It was the mufti of amiability, the maple leaf. Everyone wanted a hit of that mild glamour.

But the moment seems to have passed. No longer are the carousels of French airports and the art galleries of Spain a forest of stylized nylon leaves. In its poll in the current issue, Vanity Fair ponders missed opportunities: "An appalling 92 per cent of Americans admit they have never, ever pretended to be Canadian when travelling abroad – thus losing out on a chance to try on for size that special frisson that is a Canadian's birthright."

Now, Canadians abroad seem less likely to proclaim that birthright, and you have to search for hidden clues to their identity – a lingering Labatts belch, a tendency to hum along to Nickelback.

But why have we become less boosterish? Canada has been the world's most appealing country for two years running, according to a measure called the Country Brand Index (an honour that is not accompanied by a cash prize or a tiara, alas). In a similar popularity ranking by Globescan and the BBC, Canada is ranked third in the world, after Germany and Japan. And no, we're not going to war with them again to retrieve first place.

It seems, from a distance, as if Canadians have lost faith in themselves as good guys on the world stage. Perhaps it was the Economist calling Stephen Harper a bully, or the sight of all those scientists marching for the freedom to, you know, perform science, or the smoking heap of the Kyoto Accord, or that other smoking heap that takes up so much of Alberta, or the fact that we export asbestos to the world but won't allow our own citizens near it without a hazmat suit. … But these are all issues that keep Canadians up at night. Most of the rest of the world doesn't care (although the oil sands have overtaken clubbed seals as the main stain on our international reputation).

Do you know what Canadian events make the news in Britain? Decapitations. Other decapitations. Mall shootings. It's as if they're stunned that our placid exteriors contain dark depths. In the main, though, Britain (and, in my experience, the rest of Europe) maintains a sunny view of our country. Maybe they're happy to see the vulgar, jingoistic maple leaf trend in decline.

Here's what they seem to care about: bears, snowboarding, Arcade Fire and an economy that isn't floating in the toilet. The main question I get asked (once people have apologized for calling me an American) is, "You're from Canada? Do you think I could move there?"

Tell us, Canadian travellers: Are you still proudly ironing that flag on to your luggage? Or have you felt a chilly shift in your international reputation? Share your experiences at tgam.ca/travel. 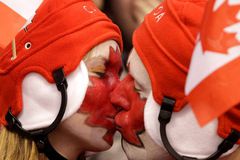 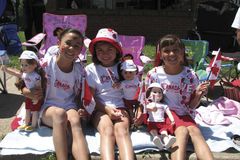