If I had to blame somebody, I'd blame the bird. It was a tern, or maybe an eider duck, and there it was: sitting on a lone rock staring at me with an incredulous look on its face. To be fair, it had cause - after all, here I was head-to-toe in scuba gear, bobbing in the bone-cold waters of Hudson Bay on an otherwise uneventful sunny day - yet that bird's skepticism caused me to question my otherwise-sterling good sense.

It was September and I was in the middle of a five-day scuba-diving course in Nunavik, the vast Inuit region that covers almost a third of Quebec. I was neck-deep in salt water, attempting my first open-water dive a few kilometres away from the village of Puvirnituq, a six-hour flight from home - and about 4,000 kilometres from where most anyone would go to learn how to scuba.

But then, this part of the country isn't meant for just anyone. Nunavik (not to be confused with Nunavut, its northern neighbour) is 507,000 sprawling square kilometres of unspoiled tundra, mountains, rivers and lakes. Its awe-inspiring topography and abundant wildlife - which includes walruses, whales and about one million caribou - have made it a haven for eco-tourists over the past decade.

It's also home to a burgeoning adventure-tourism trade, with everything from scuba diving, skydiving and sea-kayak expeditions to a 10-day winter survival trek that has you dogsledding out onto the snowy tundra to live off the land in your own homemade igloo. (If you're lucky, you'll get to dine on raw caribou.)

Unlikely as it sounds, Nunavik's unique travel opportunities have attracted a steady flow of thrill-seeking tourists since it began offering them a few years ago. Everyone from hard-core scuba divers and veteran RCMP officers jonesing for a new challenge to U.S. Army Rangers, search-and-rescue workers, firefighters - and even Hollywood producers - have flown to the remote region for an Arctic adrenalin rush.

I am none of the above, but the lure of learning to scuba in northern waters (which requires a full-body dry suit and about 70 pounds of equipment) while staying in an authentic Inuit village held obvious appeal. I mean, the brag factor alone would be worth it.

If you're up for the challenge, you'll need to book a flight to Puvirnituq (it's inaccessible by road), a village of about 1,500 people on the eastern shores of Hudson Bay and the nexus of Nunavik's adventure-tourism business. One of the largest of the territory's 14 villages, Puvirnituq (or PUV to locals) boasts two hotels, two grocery stores, a hospital, a search-and-rescue boat and a state-of-the-art dive shop. The latter is the headquarters of the Nunavik Arctic Survival Training Centre, a locally run and internationally registered scuba-training centre.

The centre is the brainchild of Mario Aubin, a veteran of the Canadian Forces who spent his 26-year career crisscrossing the North on search-and-rescue missions or teaching survival techniques to troops. If anyone is responsible for Nunavik's tourism renaissance, it's him.

A compact man in his 50s, Aubin began working in PUV in 2000 as part of a local initiative to attract tourists to the town's then-new hotel. Originally, he designed the centre with ecotourists in mind. But that didn't last long.

"To be honest, I found the ecotourism a little slow," he says. "We had people come up to see the birds and the flowers and to spend time with the Inuit, which is nice, but it's not my style. With those tourists, you have to be slow and calm. I was happy to be with them, and they really enjoyed it and so did the Inuit - but we had to go in a different direction."

In 2002, Aubin got to talking with police divers during a search-and-rescue conference in Toronto. Taken by his enthusiasm, they offered to scuba train any Inuit who were willing to travel to Ontario. From the local population, half of which is under the age of 21, Aubin recruited a few of the toughest and took them to Toronto where they learned how to dive in Lake Ontario. In 2006, after a couple of return visits, Aubin set up his own dive shop, maintained by local Inuit youth.

And unlike some schools in more tropical climates, this is no fly-by-night diving school. It can't be; the water is simply too cold and unforgiving for quick-and-easy training. Plus, Aubin would never allow that. He takes training so seriously that in 2008 the centre became the first civilian unit in Canada to be certified by Emergency Response Diving International, the sanctioned body that trains police, fire and other public-safety organizations to become search-and-rescue units. It's part of his bigger goal to help the village become less dependent on RCMP from Quebec.

"He wants PUV to be the mecca of diving in Nunavik," says Kostas Kyripolous, one of Aubin's instructors. "He wants to turn these guys into super-divers."

If it was up to me, I'd say they were already there. Sailasi Ittukallak, the affable and easygoing 22-year-old instructor I was paired with, has dozens of dives to his name and about 50 skydives. A novice diver couldn't hope for a better partner: On my first day in the water, I panicked about 10 metres down, and he calmed me using only his eyes.

Ittukallak's skills aren't lost on the community either. He and his fellow instructors have become role models to the village's countless kids, and teenaged girls often gather on the water's edge when they're diving. (Aubin told me that he has a waiting list of kids eager to become scuba instructors.)

Then there's the town itself, as remarkable as it is remarkably remote. When I wasn't in the classroom or zipped into my dry suit, I spent my free time wandering the unnamed streets and the rusty, ochre-tinged tundra. Inuit children are everywhere, and retired sled dogs gravitate to you for food or a petting. The town exudes the comfortable, friendly vibe of most small towns that have to endure severe weather.

However, this warmth does not extend to the water, which even in summer floats around zero degrees. By the end of summer, it can be on the cloudy side (because of the buildup of algae), so serious scuba divers would be wise to book in the early spring, when the water runs clear. Better visibility will improve your chances of running across one of the shipwrecks or planes that locals say are on the seabed, or for collecting mussels and sea urchins for dinner.

If that isn't enough diving excitement, Aubin is one step ahead. He has already begun setting up survival training centre offices in Nunavik's 13 other communities, including Ivujivik, which he hopes will become a magnet for underwater whale-watching expeditions.

The diving itself can be both exhilarating and exhausting because of the water temperature and amount of equipment. But where else can spend your days diving and nights relaxing under the Northern Lights? Besides, there are warmer waters to dive in, but you would be hard-pressed to find a warmer welcome.

GETTING THERE Puvirnituq (about 1,000 kilometres north of Montreal and Ottawa) serves as the travel hub for the Hudson Bay coast with daily flights on a Dash 9 turboprop available out of Montreal's Dorval Airport via Air Inuit. Beginning in December, Air Inuit will offer non-stop flights several times a week on a 737.

WHERE TO STAY Puvirnituq Co-op Hotel 866-336-2667; inuit.pail.ca/puvirnituq-hotel.htm. This waterfront hotel has 25 rooms with private baths, fridges, televisions and Internet access, plus access to a full kitchen. About $195 a night. Hotel Novalinga 819-988-2946; inuit.pail.ca/novalinga-hotel.htm. This smaller hotel offers more modest accommodations. About $125 a night.

WHERE TO EAT Puvirnituq doesn't have an excess of dining options. There is a snack bar in the Co-op Grocery store, and a commercial smoke house that specializes in smoked Arctic char opened recently. Local hunters are more than willing to provide what the Inuit call "country food" - caribou meat, Arctic char and even mussels.

WHAT TO DO
Adventure tours The Nunavik Arctic Survival Training Centre (819-988-2825; www.nastc.ca) offers all-inclusive packages starting at $5,000 (includes flight, food and accommodation). The packages range from basic survival training to multiday treks that find you travelling by dogsled and staying in an igloo. Scuba training packages are also popular; and they recently introduced skydiving adventures.

SOAPSTONE CARVINGS Puvirnituq is known as the cradle of Inuit art, thanks to the formation of the Carvers Association of Povungnituk (the town's previous name) in the 1950s. Dozens of soapstone carvings are on display at the Co-Op Grocery Store (prices range from $30 to $5,000), or you can simply ask around for a private viewing from one of the town's artists.

FURS AND GEAR Souvenir hunters should drop by the Hunter Support Shop in the Puvirnituq Town Hall. It offers everything from furs and seal-skin gloves to traditional Inuit tuques and panaqs (the ubiquitous dagger-like knife that is used for everything from hunting to igloo-building). 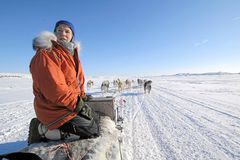