Skip to main content
Special to The Globe and Mail
Published March 28, 2014

In his latest book, Air Canada: The History (Dundurn), Peter Pigott shares an incredibly detailed account of our national airline, from its birth in 1937 as Trans-Canada Air Lines to its bankruptcy – and recovery – in the early 2000s. Here, he reveals 10 things you may not know about our national airline. 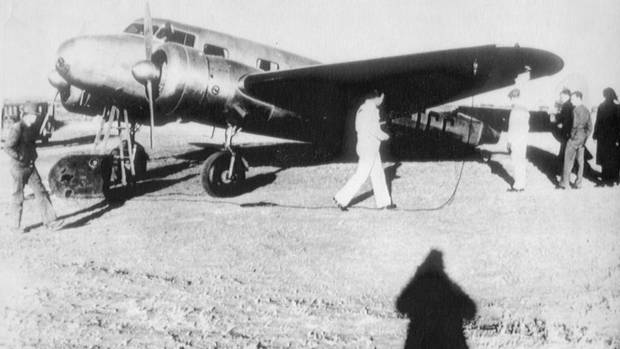 One of the original, propeller-driven, 10-passenger Lockheed 10A planes that started Trans-Canada Air Lines. Photo from 1937.
Its first aircraft were Lockheed Electras, the plane specifically chosen by C.D. Howe, Canada’s first minister of transport. The only member of Mackenzie King’s cabinet who had actually flown in a plane, Howe admired the aviator Amelia Earhart, who was about to use the same model on her round-the-world flight. She began her flight on March 17, 1937, to disappear into history. 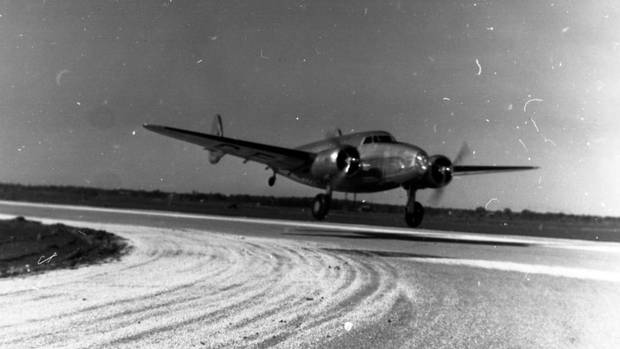 John Boyd/The Globe and Mail
Trans-Canada Air Lines's first plane, CF-TCA, landing at Malton Airport in 1938.
In 1938, Trans-Canada Air Lines was the first airline to equip its fleet with alcohol de-icing nozzles to remove the ice that accumulated on windshields at high altitudes. Before on-board radar, this was crucial to the safety of the aircraft. 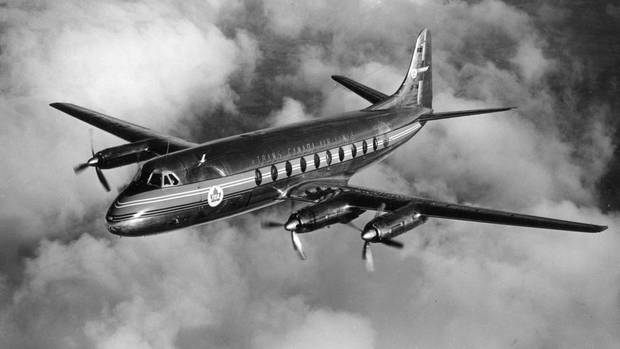 Trans-Canada Air Lines
One of the 22 Viscounts built for Trans-Canada Air Lines. Photo from 1956.
TCA became the first airline in North America to use turbo-driven airliners when it brought the Vickers Viscount into service in 1955. The nimble little airliner was an instant hit with passengers because of its silent turbines and large windows. 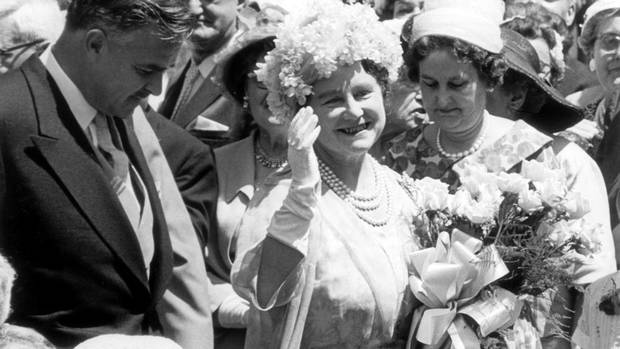 Harry McLorinan/The Globe and Mail
The Queen Mother with Ontario Premier John Robarts at Toronto City Hall in 1962.
To the envy of BOAC (British Overseas Airways Corp.), the then-state-owned British airline, the Queen Mother in 1962 chose to fly TCA from London to Montreal as her first commercial flight. She sat in first class but professed a desire to see what economy class was like and to the delight of its occupants she explored it, even shaking a surprised baby’s finger. 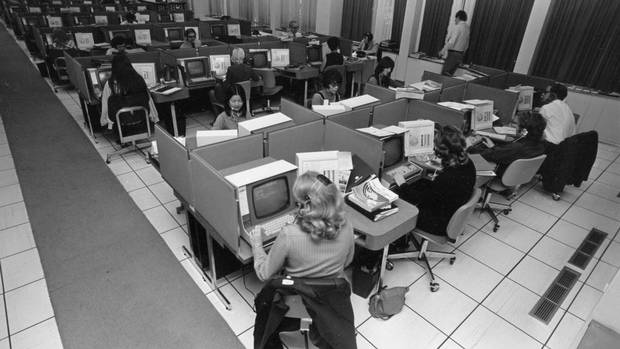 Tibor Kolley/The Globe and Mail
Operators at Air Canada in 1973 use a new computer system that is able to flash passenger reservations and confirm seating in a matter of seconds.
In January, 1963, Air Canada introduced the world’s first computerized reservations system. ReserVec, designed and manufactured by Ferranti Canada, was two years ahead of SABRE, which American Airlines had funded at five times the cost. 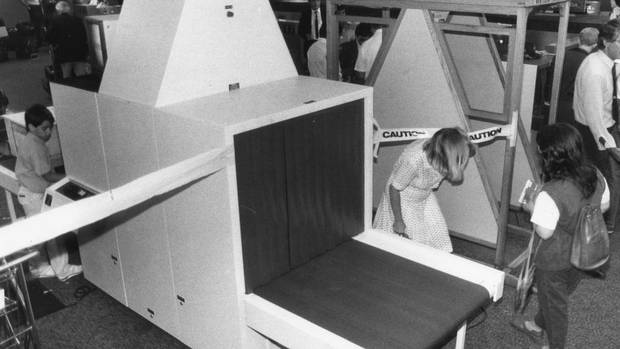 Jeff Wasserman for The Globe and Mail
Children have a look around new x-ray scanners at Toronto's Lester B. Pearson International Airport, 1985.
On Nov. 12, 1971, an Air Canada DC-8 with 115 passengers flying from Calgary to Toronto was hijacked by one Paul Cini, who brought on board a sawed-off shotgun and dynamite. Taking flight attendant Mary Dohey hostage, he said he was a member of the IRA and ordered Captain Vern Ehman to fly to Ireland. When the plane landed at Great Falls, Mont., to take on a navigator, Cini allowed most of the passengers and crew, including Dohey, to leave. A former psychiatric nurse, she refused to do so, all the while talking gently to Cini. The hijacker then decided to jump out of the plane and put his gun down to strap on what he thought was a parachute – it was actually a life jacket. At that moment, Ehman kicked the gun away and the crew overpowered him with an axe. For their courage and sheer professional cool, Dohey was awarded the Cross of Valour, the highest Canadian civilian medal for bravery, and Ehman and Purser John Joseph Arpin the Medal of Bravery. 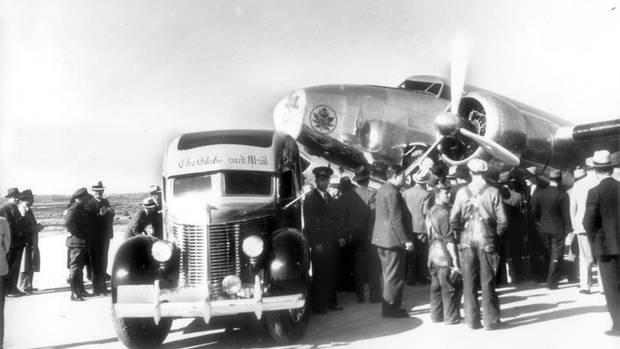 The Globe and Mail
Unloading newspapers from a Globe and Mail truck onto a Trans-Canada Air Line plane, 1938, at Malton Airport.
Before in-flight entertainment meant drop-down LCD screens and PTVs (personal television viewers), passengers read the newspapers and magazines supplied by the airline. Depending on the demographic, the type of magazines on board was important, and Air Canada bought up to two million copies of a variety at 5,000 per edition. Besides the staples Time and Newsweek, in 1976 the airline also stocked their aircraft with Saturday Night, Canadian Review and Canadian Forum – and Playboy. The last magazine was a huge expense for the airline as, strangely enough, only the copies of Playboy were stolen. 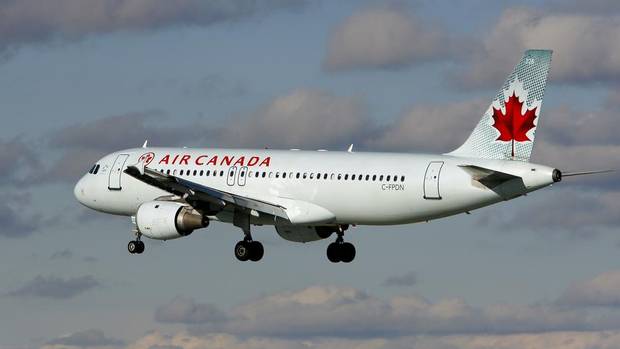 Larry MacDougal
An Airbus A320 jetliner lands at Calgary International Airport.
Air Canada was the first airline in Canada to operate the Airbus A320. The airline took delivery of its first Airbus A320 on Jan. 25, 1990, in Toulouse, France. While the airline claimed that it had chosen the aircraft for its technical superiority, the ensuing Airbus scandal almost brought down Prime Minister Brian Mulroney. 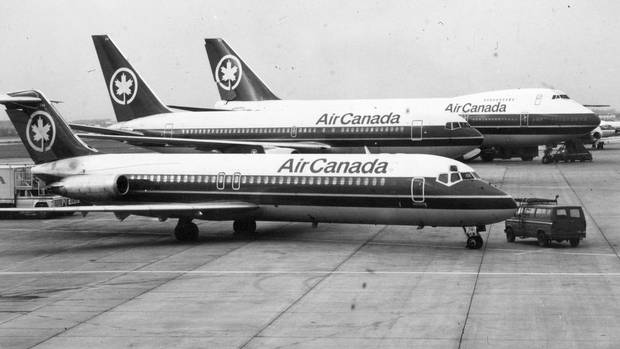 Air Canada
Air Canada jets on tarmac in 1991.
In October, 1990, Air Canada became the first scheduled airline in the world to offer exclusively smoke-free flights between North America and Europe. This was a brave move as dedicated smokers just switched to airlines that still allowed smoking on board. 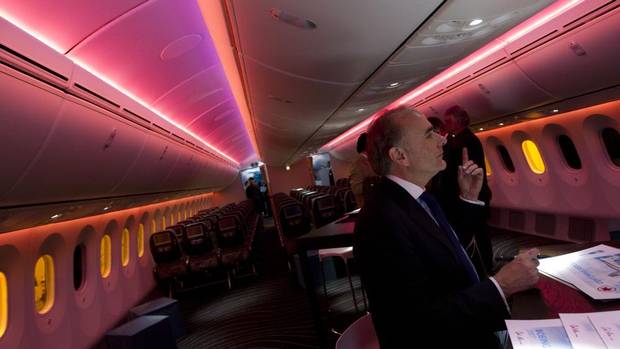 Peter Power/The Globe and Mail
Calin Rovinescu signs some prints inside Air Canada's new Boeing 787 Dreamliner in March, 2012.
When Calin Rovinescu was appointed CEO on March 31, 2009, it marked the first time a Canadian had led Canada’s national airline in 17 years – since 1992, when Claude Taylor was in charge. Air Canada had four American CEOs in between.
Single Page
1 2 3 4Next