Later in the afternoon, the research assistant with the Highway Wilding project began the onerous job of viewing and logging thousands upon thousands of images. Many showed deer nibbling on brush near the camera, triggering the remote shutter with their movement. There were also plenty of grizzly, moose and cougars, which, after years of avoidance, now routinely use the structures.

Then, without warning, Nikki let out a lung-bursting scream of joy. On the chilly night of Nov. 16, at 1:09 a.m., a lone wolverine had scampered across an overpass near Sunshine Village Exit. After 15 years of monitoring, and more than 200,000 wildlife crossings, this was the first recorded use of an overpass by the wily wolverine species – and the gold seal of approval for the structures.

"The passage was symbolic," says Tony Clevenger, Heim's supervisor, who has spent more than a decade studying the effect of the Trans-Canada Highway on wildlife populations in the mountain parks.

And it couldn't have come at a better time for the wolverine – Gulo gulo in Latin, or double glutton – which may be the most enigmatic critter in Canada. It is certainly one of the least understood.

Known colloquially as "skunk bears," they are related neither to bears nor wolves. For centuries, trapper yarns have portrayed the animals as unscrupulous, savage, stinky, cabin-ransacking demons. More recently, X-Men movies have furthered the confusion, for, despite steel claws and generous fur, Hugh Jackman's character is simply too wimpy when measured against the real deal. Exceedingly few Canadians will ever see a wolverine in the wild, and besides, who would recognize one if they did?

Until recently, science has overlooked these animals (while researching fashionable mega-fauna, such as caribou and bear, in minutiae) and today even the most fundamental questions remain unresolved. Ecologist Jason Fisher has spent the past six years studying wolverines in the Alberta foothills. When I ask him the extent of the wolverines' current range in Canada, he hesitates: "The honest answer is, I don't think anyone really knows for sure."

Hudson's Bay Company records show a substantial number were killed during the halcyon days of the fur trade. The advent of repeating rifles and steel jaw traps decimated populations, but it was the widespread introduction of predator poisons across North America during the 1960s and '70s that turned the animal's greatest strength – its supreme ability to locate scraps of meat scattered about a landscape – into a ruinous liability. In a few short years, wolverines were extirpated from the Lower 48, and savagely beaten back across Canada.

Surviving populations are centred in the northern tundra and along the spine of the Rocky Mountains. "A few may still exist in Labrador," Fisher says, where unconfirmed reports surface occasionally (although no concrete evidence has been found since the 1970s). Ditto for Quebec. In Ontario, wolverines are being steadily pushed back, their range hovering just above the most northerly logging concessions. They wander the boreal forest, but to what extent is anyone's guess.

How on earth could we know so little about this animal?

"You try putting a collar on a slippery, tube-shaped animal that is hell-bent on getting it off," Fisher laughs.

The deeper truth is that wolverines are difficult to find, and even harder to observe. They are blessed with the endurance of a marathoner, the speed of sprinter and the mountain-climbing ability of a goat. Chasing a wolverine through the wilderness is like pursuing the Terminator.

Fisher, one of just a handful of wolverine researchers in Canada, has never seen one in the wild.

In the past five years, wolverine research has increased exponentially, aided by recent advances in survey techniques (including "log cabin traps," DNA hair-snagging, GPS implants, aerial surveying and remote camera placements). And the portrait now emerging is of a fearless and highly intelligent animal.

For starters, wolverines – like all their mustelid brethren, including marten, ermine, minks, ferrets, badgers, fishers and otters – tick at a higher metabolic rate than other animals. They keep on the move both day and night whether raiding eggs in the nest, gobbling ripe berries or taking down a big-horn sheep, patrolling the landscape at will. One travelled 800 kilometres, and visited three American states, in 10 days. Another climbed the near-vertical face of Mount Cleveland in January. Notably, it completed the 1,500-metre technical climb – which would have taken experienced alpinists the better part of a day – in a heart-bursting 90 minutes.

Their strength is off the chart, capable of crushing bones grizzlies have given up on, and tearing apart solid logs in search of grubs. One was recorded taking down a full-grown (although probably sick) moose.

"They may just be the toughest animal in the world," Douglas H. Chadwick says in his book The Wolverine Way. "When you weigh 15 kg and can back a full grown grizzly off a kill, that is just plain badass."

Robert Inman, a senior scientist with the Wildlife Conservation Society, puts it another way: "They're 1,000 pounds of attitude in a 30-pound body. They'll take on animals 10 times their size, and they thrive in places that push the limits of mammalian existence."

It was long considered a solitary animal, but modern studies are revealing a complex social hierarchy. Parents often assume "joint custody" of their offspring, and long after weaning, youngsters spend time with both mom and dad, learning to hunt and scavenge within their protected territories.

Chadwick relates the story of a wolverine kit that perished during its first winter. Researchers later found the tiny body in a depression scraped from the ground, and covered with pieces of wood chewed from a nearby log. It was, in the words of the researcher, undoubtedly a wolverine burial site.

Preliminary research shows that wolverines are sensitive to encroachment in their territory. With human activity burgeoning in every remote corner of Canada, understanding the effects of development on wolverines is a pressing need as Canada may represent the wolverine's last, and only sustainable, hope. Populations in Sweden, Finland and Norway are a small fraction of what they once were, and poaching remains a serious problem in Russia and China.

Given their sparse populations and enormous ranges, survival outside protected areas is critical. Biologists have known for decades that parks alone – small islands of protection – are incapable of protecting species with a wide range. Instead, "connective corridors" and "co-existence" have become the new mantras of conservation. And highway overpasses – like the one a wolverine scuttled across last week – are a key strategy in mitigating fragmentation.

"Will this particular animal be back?" Clevenger asks. "Of course, no one knows, but other species clearly demonstrated that once they found the structures, their usage became routine. Mothers crossed with their offspring, and so on."

Clevenger goes further. "A strong argument can be made that wolverines – not bears and caribou – should be our focus when assessing the overall health of some ecosystems. They certainly may hold the key to our understanding of landscape fragmentation."

But lost amid the complex science is the idea that wolverines offer far more than a utilitarian understanding of the dynamics of conservation.

Consider Chadwick's poetic summation of these powerful animals: "If wolverines have a strategy, it's this: Go hard, and high, and steep, and never back down, not even from the biggest grizzly, and least of all from a mountain. Climb everything: trees, cliffs, avalanche chutes, summits. Eat everybody: alive, dead, long-dead, moose, mouse, fox, frog, its still warm heart or frozen bones. Whatever wolverines do, they do undaunted. They live life as fiercely and relentlessly as it has ever been lived."

Those are ideals worth protecting. Aren't they?

Watch a video on DNA snagging by Highway Wilding here.

Get back in the saddle in Banff National Park
October 28, 2011 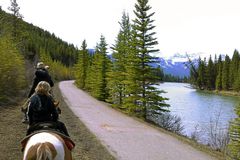 At the Banff Centre, nature provides the inspiration
May 25, 2011 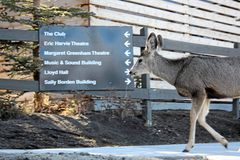 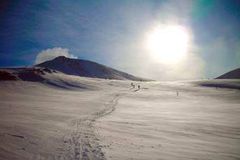