Skip to main content
Contributed to The Globe and Mail
Published September 19, 2016 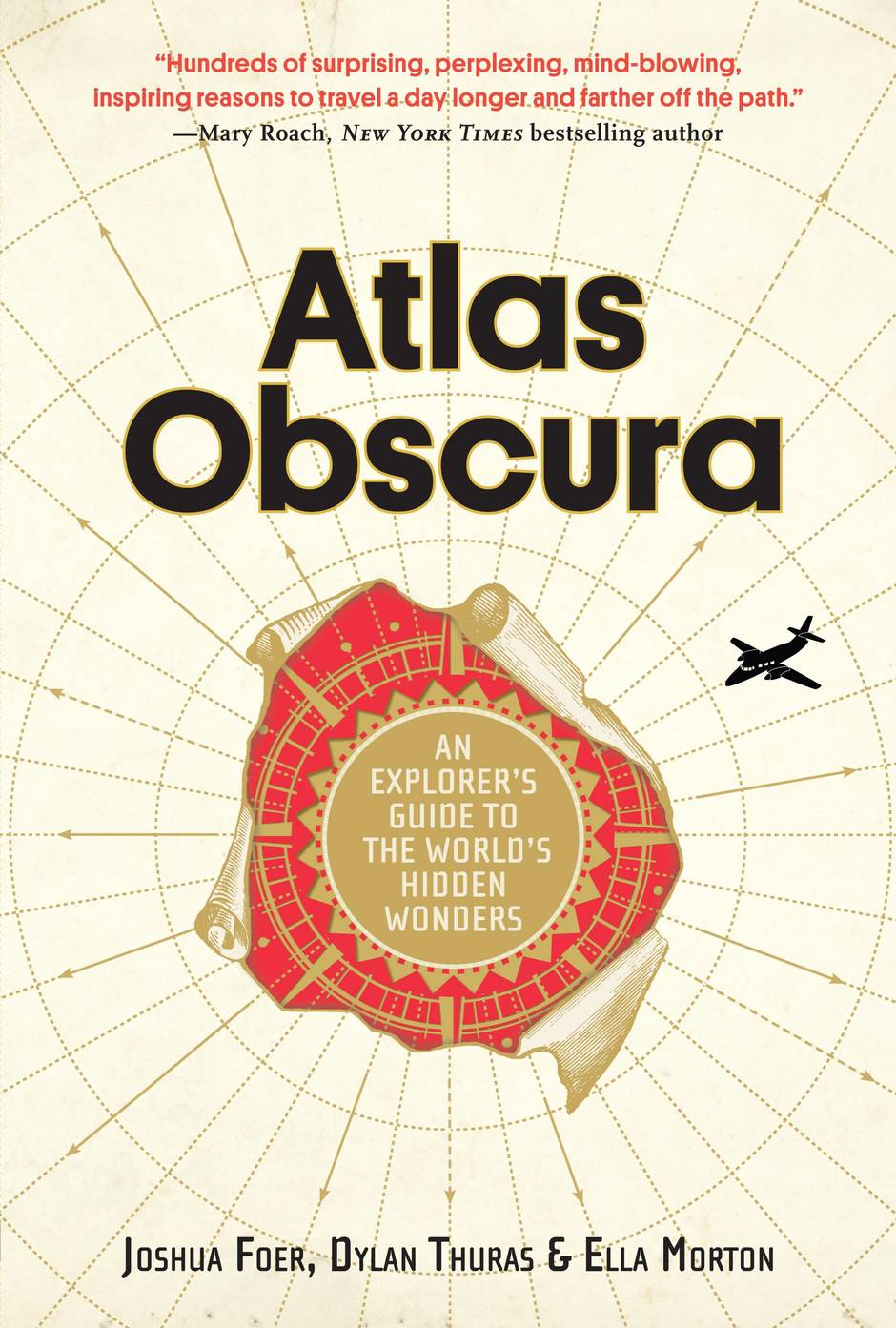 Peter Camani has a suggestion for where your earthly remains should go when you die. “Why settle for a small underground plot in the suburbs,” he writes on his website, “when you have the option of joining a vibrant creation that fills the landscape?”

The “vibrant creation” to which he refers is a forest of 18-foot-tall (5.5 metre) screaming heads made from cement and – if his idea catches on – the ashes of deceased humans.

The field of screams is just one component of Camani’s ongoing art project on a 300-acre (1.2 km2) former farm just outside the village of Burk’s Falls, Ont. It all began in 1989, when the former high school art teacher began building a house on the property. Dubbed Midlothian Castle, the dwelling features a screaming head for a turret and a dragon for a chimney that appears to breathe smoke whenever the fireplace is blazing.

In 1995, Camani began installing sculptures on the land surrounding the house. There are now over 100 scattered through the landscape – 84 screaming heads, giant half-buried hands, trees with ghoulish faces and the Four Horsemen of the Apocalypse.

Inspired by the Druids, Camani intends to continue sculpting screaming heads for as long as he’s able. Though he has long envisioned a forest of sculptures made from cement and human ash – with the names and bios of the deceased written on them – he has only created one so far.

Midlothian Ridge, RR #1, Burk’s Falls. The castle is around 240 kilometres north of Toronto. 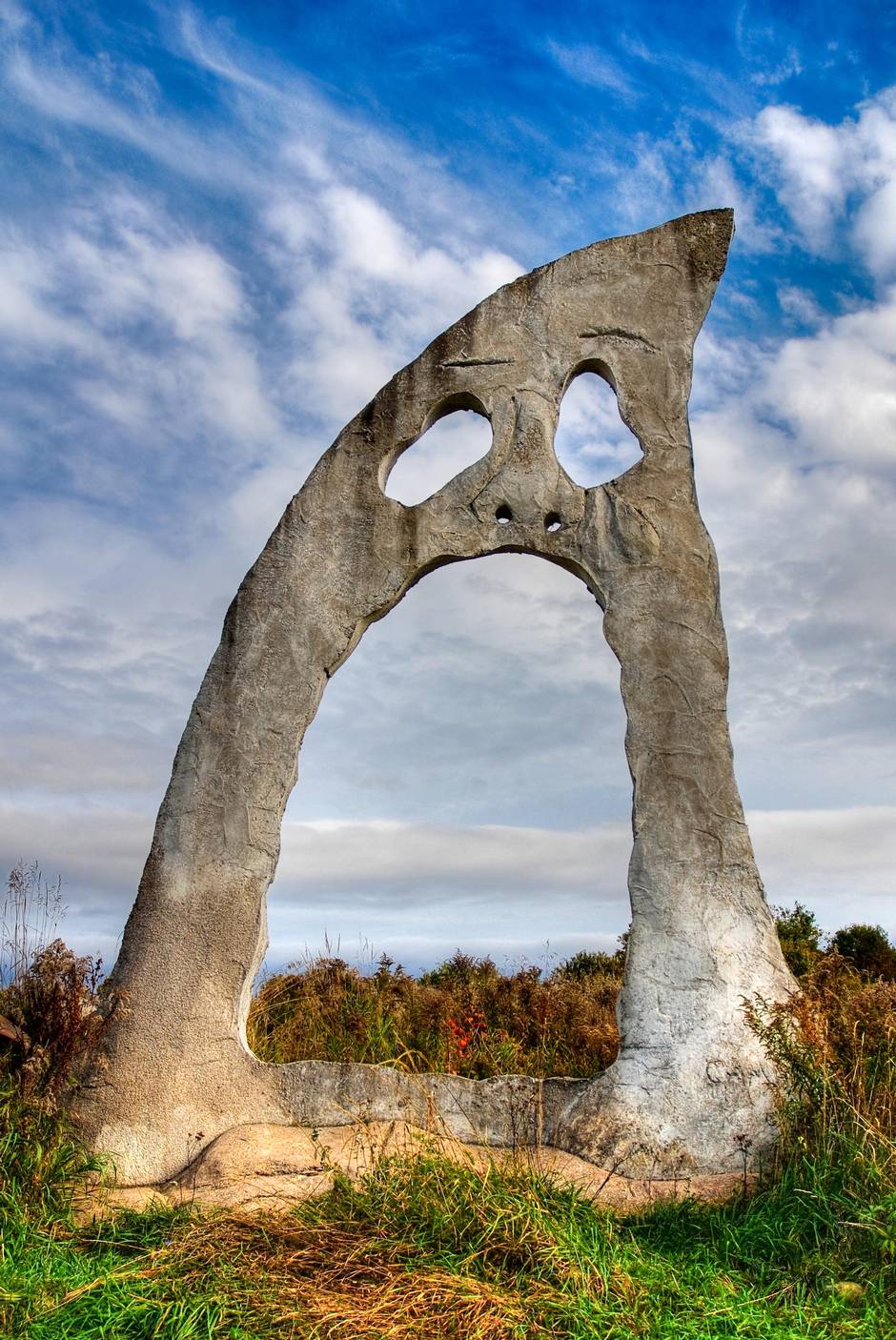 Gaze out of an airplane window above the Badlands east of Medicine Hat and a Native American chief will stare back at you. Over millenniums, erosion and weathering fashioned the rocky terrain into the shape of a human head, complete with feathered headdress. A gas well and road leading down from the chief’s ear resemble earphones.

An Australian woman going by the name of “supergranny” discovered the head on Google Earth in 2006. Following a naming competition, the 820 × 740 foot (250 × 225.5 metre) figure came to be known as the Badlands Guardian. (Rejected monikers include Space Face, Chief Bleeding Ear, The Listening Rock, Jolly Rocker and Pod God.)

The Badlands Guardian is an example of pareidolia, the phenomenon of an overactive imagination perceiving recognizable shapes in ambiguous stimuli. Faces, particularly religious ones, are frequently found in inanimate objects – the Virgin Mary has appeared, among other places, in a grilled cheese sandwich, on an expressway underpass and in a pile of chocolate drippings at a California candy factory.

The Badlands Guardian is east of Medicine Hat, a few miles south of Many Islands Lake. It is only visible by air – there is no public access to the site.

A one-square-mile desert, surrounded by snow-covered mountains, in a Canadian territory just south of the Arctic Circle. How can this be?

The answer is that Carcross Desert, though certainly sandy and often referred to as the world’s smallest desert, is actually the remains of a glacier. The Carcross area – “Carcross” is derived from “caribou crossing” – was once a glacial lake. Over thousands of years, as the glaciers retreated, the water level lowered, leaving behind the layer of silt that once formed the bottom of the lake. This silt, shaped by the wind into dunes, became the world’s most adorable desert.

Summer activities at Carcross Desert include off-roading and sandboarding. In winter, when the sand is covered in snow, bring your skis and snowboards.

The teeny desert is an hour’s drive south of Whitehorse.

Among the 50 or so dioramas at this museum is a scene of a young couple from the 1950s. She wears a turquoise poodle skirt. He is a rebel type, clad in a black leather jacket. They stand, locked in an embrace, beside a motorcycle under the glow of a full moon. They are adorable. And they are gophers.

Gopher Hole Museum, a collection of stuffed Richardson’s ground squirrels posed to resemble the townspeople of Torrington, opened in 1996. Located in a former one-room schoolhouse, the museum displays the gophers in wooden boxes with painted walls and props. There are gophers grilling hot dogs, getting married, fishing, playing Texas Hold’Em and eating cotton candy. Some have paper speech bubbles attached to their heads. The one above the gopher clutching his stomach at the dinner table reads, “Oh boy am I ever stuffed!”

208 1 Street South, Torrington, Alta. The museum is open from June to September. Look for the big plywood gophers in Torrington – they’ll guide you to the door.

For a few weeks every year, Interlake teems with piles of writhing serpents. In late April, tens of thousands of harmless red-sided garter snakes emerge from their winter dens, slithering over one another in search of a mate – the largest single concentration of garter snakes in the world. A multiweek reproductive frenzy follows, during which tangled balls of snakes constantly form and disperse. It’s hypnotic and unexpectedly audible – on a dry day you’ll hear the animals’ scales rubbing together.

The dens are 6.5 kilometres north of Narcisse, Man., along Highway 17. To see the snakes mating, visit in late April or early May.

In 1913, Chang Toy, owner of the Sam Kee import-export company, sold most of his corner property at Carrall and Pender Streets to the City of Vancouver for the construction and widening of West Pender Street. It was not the most amicable transaction – Toy was not adequately compensated, and the city’s disrespect toward him was part of the anti-Chinese sentiment that prevailed at the time.

Left with only a strip of land to call his own, Toy recruited architects Bryan and Gillam to create a two-storey building with attention-grabbing dimensions. The six-foot-wide (1.8 metre) structure is Guinness-certified as the narrowest commercial building in the world.

8 West Pender St., Vancouver. The building is a seven-minute walk from the Stadium-Chinatown stop on the SkyTrain. 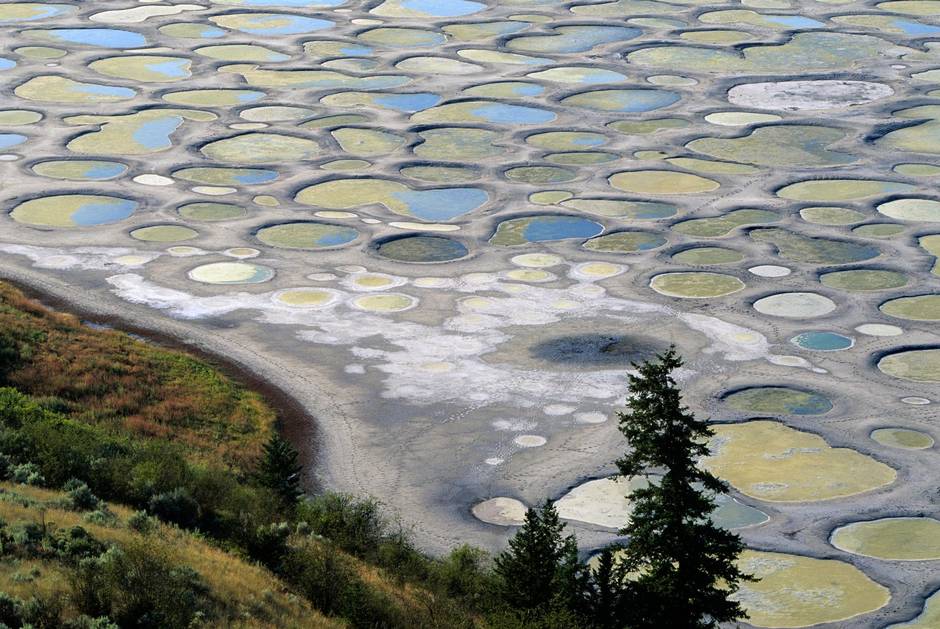 From fall to spring, there is nothing unusual about Spotted Lake. But come summer, the reason for its name becomes clear: Evaporation reveals hundreds of round pools on the bottom of the lake. Each spot is coloured according to the type and concentration of its minerals.

Spotted Lake has long been a sacred site for the First Nations of the Okanagan Valley. Its minerals, which include magnesium sulfate, calcium, sodium sulphates, and traces of silver and titanium, are believed to have healing properties. During the First World War these therapeutic minerals were harvested and used to make ammunition.

Okanagan Highway, 9.7 kilometres west of Osoyoos, B.C. The lake is on private land, but you can catch a glimpse from the highway.

Trembling aspen trees, so named for the way their leaves shiver in the wind, normally grow tall, straight and thin. But a grove of aspens near Alticane, known as the Twisted Trees, has somehow ended up as a crooked and mangled mess.

The oddest thing about the Twisted Trees is the fact that they are surrounded by perfectly normal trembling aspens. No one knows exactly when this patch of forest became so gnarled, but theories abound. One local legend tells of an alien who emerged from a UFO to urinate into the soil, causing it to become contaminated and warp the trees.

The scientific explanation is more mundane. Quaking Aspen grow in vast groves consisting of what appear to be individual trees, but which are actually “clones” of an original source. The entire stand is a single giant organism.

At some point, a genetic mutation seems to have affected how these trees grow – and not just one tree, but the entire clonal forest. Though the mutation may have made some creepy, gnarly trees, it apparently wasn’t devastating enough to impede their growth.

The Twisted Trees are about five kilometres southwest of Alticane, Sask. 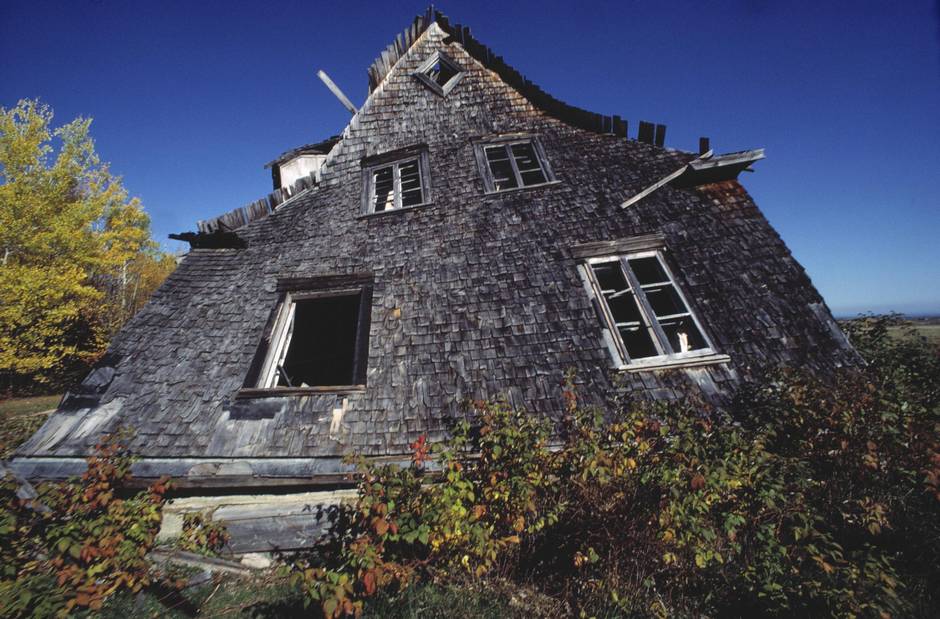 The village of Val-Jalbert, 150 miles (241 kilometres) north of Quebec City, sprang up in 1901 when forestry entrepreneur Damase Jalbert built a pulp mill powered by Ouiatchouan River waterfalls. Though Jalbert died just three years later, the mill survived a resulting cash shortage and began to thrive under new owners. From 1909 until the early 1920s, Val-Jalbert was a prosperous community. Its 200 mill workers and their families had access to a school, a general store, a butcher’s shop and a post office, all enhanced with electricity.

In 1927, however, the reduced global demand for pulp forced the mill to close. At that time, Val-Jalbert had a population of 950. By the early 1930s, it was a ghost town. Transformed into a tourist attraction in 1960, the village is now open for exploration from June to October. Many of the buildings have been restored while others sag inward, their wooden walls splintered and ridden with holes. Much of the mill’s original machinery is intact, and the old butcher’s shop now houses an old-timey photo booth.

Before you leave, head to the river’s viewing platform for a close look at Ouiatchouan Falls, which, at 72 metres, is taller than Niagara Falls.

Highway 169, between Chambord and the city of Roberval, Que.

Excerpted from Atlas Obscura: An Explorer’s Guide to the World’s Hidden Wonders © 2016 by Joshua Foer, Dylan Thuras and Ella Morton. Used with permission by Workman Publishing. $35 at indigo.ca.