Each year, cruise ship operators seem to be upping their "mine is bigger and fancier than yours game." And nobody does it better than Royal Caribbean.

The cruise line made a big splash, as it were, with its remake of the Oasis of the Seas about five years ago. Then came its ever-so-slightly bigger sister ship, Allure of the Seas. Both ships carry roughly 5,400 passengers and feature seven distinct "neighbourhoods," along with a carousel and designer shops.

Last year, the cruise line launched Quantum of the Seas: 168,666 tons, 4,180 guests, a sky-diving simulator and a giant viewing pod that suspends out over the water.

Now comes word of a new and improved ship for 2016 called Harmony of the Seas, the newest of the Oasis class from Royal Caribbean. With room for 5,479 passengers, it will be the world's largest cruise ship.

Harmony of the Seas also will feature the Central Park garden theme and various neighbourhoods, but they're adding three separate three-storey waterslides; better than most hotel pools by a long shot. They also are promising "larger balcony and suite staterooms than her sister ships (and) new virtual balcony staterooms." Virtual balcony rooms have an 80-inch high-definition screen that projects the views from outside the ship into your inside room, thus providing the illusion of that great view of your ship steaming into port in San Juan.

As with the Quantum of the Seas ship, Harmony of the Seas will have robotic bartenders called Makr Shakr, as well as special wristbands you can use to pay for your upgraded dining experience or for a shore excursion. They also are promising high-speed Internet (at what price we don't know) so you can talk with friends on Skype or download videos of yourself spiralling down a three-story waterslide as the ship steams between St. Maarten and St. Thomas.

Harmony of the Seas will span 16 decks, encompass 227,000 gross registered tons and carry up to 5,479 guests in 2,747 staterooms. The cost is reported to be about $1.5 billion (U.S.). Plans are for the ship to make its maiden voyage in April of next year. The ship's itinerary is expected to be announced later this month in case you're desperate to attain bragging rights.

A decade or so ago, I cruised on the 3,100 passenger Voyager of the Seas and I thought that ship was amazing with its rock climbing wall, multiple pools and mini-golf course. But it turns out it was just a play toy. Cruisecritic.com places it all the way down at No. 19 in the world on the size scale. Pshaw.

DESTINATION OF THE DAY

It doesn't get as much publicity as sexier spots further south, but I love Florida's Amelia Island. You'll find a cozy, old-style town in Fernandina Beach with fun shops and what's said to be Florida's oldest bar. The beach goes on forever and there's marvellous kayaking opportunities and even a nearby Segway ride you can take through the forest and along quiet waterways. You don't find any Miami attitude, but you will find excellent golf and several fine hotels, including the Ritz Carlton Amelia Island and the Omni Amelia Island Plantation Resort, which has been given a major facelift. See more of Cuba – skip the resort and cruise around the island
December 29, 2014 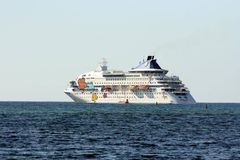 Headed south? Get the facts on chikungunya
February 20, 2015