Ten metres above 17th Street, carpenters were hammering planks together, electricians were bringing in lighting and gardeners were schlepping in bundles of plants. If you looked up from the construction site, there was New York in the weekday sun: the brick bunkers of the Meatpacking District stepping up to Midtown's cascade of office towers, capped by the Empire State Building. If you looked down, at the bed of an old elevated rail line, you could see leafy plants sprouting up through a carpet of gravel.

And they weren't weeds. Those little shrubs and perennials were crucial pieces in one of the world's most innovative new landscapes: the High Line, a park that blends wild-looking plantings with sculpted concrete in a unique promenade above the streets.

This week, the work was finished as the park's first leg opened to big crowds: visitors and New Yorkers including Edward Norton and Diane von Furstenberg, all lining up and following art-gallery-like rules to check out the water features, public art and views. (Enter at the south end, walk to the north. Don't pick anything. Don't throw anything.)

And one of the men who made it happen, Josh David of the group Friends of the High Line, was as nervous as a new dad. "The park is going to take a beating for the first while," he said in the buildup to the opening. "It's going to be a huge attraction - if we can fit enough tourists up on it."

Overcrowding and movie-star traffic jams aren't an issue at most parks, but the High Line isn't like most parks. "It's like nothing you've ever seen," David says. "You're walking through the ghost of an old railroad line that has been made into a dramatic new park."

It's also a magnet for money and culture. is a theme park for New York's best contemporary architecture, including the edgy Standard Hotel (which literally straddles the line), a Frank Gehry office building and a wild condo tower by Jean Nouvel. It's a uniquely New York kind of a place - and a work of urban alchemy, transforming a 20th-century industrial artifact for the 21st-century city of culture and tourism - that cities around the world would love to copy.

For visitors, it's a singular experience thanks to the tension between past and present. The High Line is a strange piece of infrastructure, a 1930s workhorse that cuts around and through former warehouses and factories. A decade ago, it was a relic of the old, brawny, industrial New York. But after going quiet in 1980, it went through a surprising evolution.

"The gravel bed had become the base of a self-sown natural landscape," recalls David, who first saw it as a neighbourhood activist in the late 1990s. "Seeds had drifted out of the air. … It was a lush and beautiful ribbon of grass and meadow flowers and trees."

The memory of that uncultivated, unlikely landscape is part of the park's design, overseen by landscape architecture firm James Corner Field Operations. "The idea was to make a place for people that didn't destroy the very properties that made the High Line such a magical phenomenon," principal James Corner says. "A lot has to do with retaining that quality of wildness and melancholy."

Original rail tracks were laid back in place and interspersed with new plantings that look like the old, plant life; pathways of delicate concrete ribbing weave across the tracks and between the original elaborate steel railings.

There are also a few architectural wow moments, mostly thanks to New York architects Diller Scofidio + Renfro. At one point, you can relax on a grandstand of sculpted hardwood benches - while hanging vertiginously over 10th Avenue, looking through a big window over the heads of the rushing uptown traffic.

But if the park is a unique lens on the city, it's also a showcase for the work of its lead designer, Corner - a pugnacious Englishman who is now making a park out of an 890-hectare landfill site on Staten Island and designing the 37-kilometre-long Lake Ontario Park on Toronto's waterfront. He's a star in a profession that most people don't understand.

"Landscape is plagued," he says. "You're working with a natural medium, so the genius of artistry and design is often not apparent. Central Park is a classic case in point. People will visit and think it's kind of natural. But it was shaped, it was earth-engineered. Everything in there was designed with a certain artistic vision - which was pretty radical in the 19th century."

Corner's work, like Central Park's Frederick Law Olmsted's, is groundbreaking. A generation ago, cities and planners would have looked at a rail line like this and done one of two things: "Preserve it and make fake history," as Corner puts it, or bring in the wreckers.

The High Line's in-between approach reflects a new set of ideas among landscape architects, who are focusing their efforts on the scars in the fabric of cities - like garbage dumps and railway lines. The park is an instrument to remake the city, aesthetically, environmentally and culturally. "Traces of the old are still evident: the old historical railings, the grassy landscape, the views across New York," Corner says. "But there's also this new landscape and this new social program on top of it."

David saw some of the transition from old to new. In the 1990s, he was a journalist living in Chelsea, the old manufacturing district that was becoming the city's art gallery hub. The High Line was barely visible, sticking out over a street here and there. "It was easy at that time to assume that those little pieces were just remnants," he remembers. But he started digging, and met a neighbour, artist and entrepreneur Robert Hammond, who shared his interest. Eventually the two made the High Line their cause, fighting to save it as Rudy Giuliani's administration moved to have it condemned.

At the same time, this part of the city was rapidly changing. Chelsea was a flashpoint in the bubbling global art market, and the Meatpacking District adjacent to it was becoming a hub for clubs and restaurants. "This, early on, was designated as a nightlife ghetto," hotelier André Balazs says. "There were absolutely no residents around here, and that's how the police wanted it." Suddenly the slaughterhouses were cheek-by-jowl with celebrity hangouts like Pastis and then two hipster-central hotels, Gansevoort Hotel and Soho House.

Balazs wasn't there first - but his hotel, the Standard, would wind up literally on top of the High Line, a chevron-shaped tower teetering on concrete stilts over the park's southern end. "When we started, it wasn't clear there was going to be a High Line," he says, sipping ice water in the garishly red café of his new hotel. Yet as he started creating the Standard, he became one of the park's patrons, and twisted his development project to fit around it.

"Most landlords and developers thought of the High Line as something that had negative value," he recalls, sitting in a 1950s-vintage Arne Jacobsen armchair. "The usual arguments were: How am I going to develop my land when I've got a railroad running through it?"

And then Friends of the High Line, David and Hammond's little project, started to win. Driven by the help of designer von Furstenberg and other celebrity supporters - actor Ed Norton is a long-time advocate - it picked up speed and money, becoming a partner with the city in launching and maintaining the park. They raised $49-million of the first leg's $169-million price tag. All their work, and the whiff of an avant-garde new park, only stirred up the rush of designers, developers and high-end retail, which carried on right into last fall's market crash. (Some of the condos are still going up.)

And the area is only going to get glossier. The Whitney Museum of American Art is building a 185,000-square-foot museum next to the High Line. Designed by Italian architectural star Renzo Piano and slated for a 2012 opening, it's going to make the park even more central to the city's cultural life.

For David, the park is a "an embodiment of the spirit of New Yorkers, to fight when we need to fight." There's that, and a Jane Jacobs-ian dedication to the local - plus a global perspective on design and planning, which took on special importance to all New Yorkers after the loss of the World Trade Center.

All this helped make the High Line happen. "It's rare that you see a public movement gain such momentum so quickly," Balazs says. "But there's a strange amalgam of self-interested parties that got behind it."

But most of all, it has a spot on the High Line and killer views in every direction, which no other hotel will be able to match. (The rest of the historic Meatpacking District, right by the Hudson River, is protected from high-rise development.) It's glitzy, brilliant architecture, and - this being New York - a brilliant real-estate deal.

So walk the High Line, then head back to the Standard, ride up to the rooftop bar, order a cocktail and watch the crowds down on the tracks.

GETTING THERE The High Line's southern entrance is at Gansevoort and Washington streets; take the A, C or E subway trains to 14th Street. 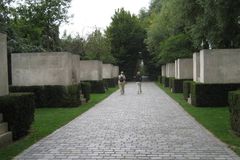 Follow Alex Bozikovic on Twitter @alexbozikovic
Report an error
Due to technical reasons, we have temporarily removed commenting from our articles. We hope to have this fixed soon. Thank you for your patience. If you are looking to give feedback on our new site, please send it along to feedback@globeandmail.com. If you want to write a letter to the editor, please forward to letters@globeandmail.com.
Comments