Vicky Ward slips into the scene in the lobby of the Four Seasons, sleek as one of her features in the glossy pages of Vanity Fair magazine.

She is thin. Tall. Her long blond hair is worn loose and straight, shiny. The journalist and author of The Devil's Casino, the juicy new book on the doomed culture of Lehman Brothers, wears form-fitting jeans, a white turtleneck sweater and jewellery at her neck, ears, delicate fingers. It's the kind of calculated style seen in the upper society of New York and Hollywood: moneyed and chic, yet casual and breezy.

Her cut-glass British accent, her degree in English Literature from Cambridge University - they are also perfect accessories, worn with ease.

True to the magazine for which she writes, there's a gossipy buzz about her. Last week, in a New York Post story about her book launch in Manhattan - at the Four Seasons (natch), with a glitzy crowd that included Vanity Fair editor Graydon Carter, Arianna Huffington and Ronald Perelman - news of her separation from her husband of 15 years, Matthew Doull (a step-nephew of Conrad Black), got equal attention.

Mr. Doull, the principal of E5 Global Media, which recently acquired Billboard and The Hollywood Reporter, reportedly updated his Facebook page with photos of himself with a pretty 5-foot-10-inch 22-year-old on holiday in Brazil. Ms. Ward, who has twin seven-year-old boys with Mr. Doull, was said to have been unaware of his new relationship until she saw the photographs, which he later took down.

"My book is about people, life, death - and then my own marriage ends," she says, laughing lightly when asked about her personal life. "I think it helped put it all in perspective."

The last year has been "a watershed year," she adds, explaining that, among other events, she turned 40.

"At some point, every journalist needs to do a book to take one's career to the next level," she explains. "Graydon Carter said: 'Do a book, but don't rush. Choose your subject very carefully, because you only have one go. If you do it and it fails, that's it.'"

The Devil's Casino is already a bestseller, and Ms. Ward is clearly doing everything she can to ensure its success. In Toronto, two well-placed society women, Hilary Weston and Jennifer Bassett, co-hosted a private party at the Four Seasons, inviting such notable guests as the Mulroneys. Next week's British launch party in London is being held at Kensington Palace.

Ms. Ward has the forthright manner of someone who knows she belongs in any gathering. Not a sense of entitlement, exactly - just confidence in her glamour, her pedigree (her father, Simon Ward, is a retired London financier), her intelligence and her ability to charm.

In fact, so sure was she of her ability to get to the core of Lehman Brothers - the Wall Street firm that went down in September, 2008, helping to set off the worst financial crisis since the Great Depression - that she wrote the book proposal without the guarantee of knowing someone who'd help her gain access. "I went in completely cold," she says. "I actually prefer doing that. I do a lot of pieces like that."

She recounts an investigative story she wrote in 2002 about Hewlett Packard and its then-CEO, Carly Fiorina. She'd heard about a party for Silicon Valley entrepreneurs in New York - the same night she had to attend a black-tie wedding. She "hoofed it in a taxi, arriving in black tie to this geekfest."

A "very tall man" and " a major Silicon Valley player" approached her, wondering if she had come to the wrong party. She told him she worked for Vanity Fair, admitting that "I don't know a thing about computers and Hewlett Packard, but nevertheless I'm going to write the definitive piece on the toxic battle that was being fought."

He would become her anonymous point man on the story.

In the case of Lehman, luck intervened. She was approached by an insider - her Deep Throat - who told Ms. Ward, "I am thinking about writing a book myself, but if I did I would never have a career in business. … But if the story is going to be written, the right story has to be told."

The source handed over personal diaries of the firm that were meant to be the basis of a sanitized version of how the United States's oldest partnership, which imploded in 1984, had been rebuilt. The diaries chronicled the story of the four "Ponderosa Boys" - Christopher Pettit, Joe Gregory, Tommy Tucker and Stephen Lessing - and Richard Fuld, former CEO of Lehman.

The entries, including details of the men's private lives - their marriages, affairs, betrayals and power plays - became the basis for a book that's been described as "an intellectual Jackie Collins novel."

"Their cult was a little darker than that of other Wall Street firms," Ms. Ward says. "In a way, what made them great - the team spirit, the four guys [commuting]in the same car, all for one and one for all - became what made them bad."

Then there was the culture of wives. "When one of them told me, 'My child had just had a seizure but I had to get on that helicopter [to attend a Lehman function]or it would cost my husband his job,' at that point I felt sick," she says.

Ms. Ward quickly recognized that the story was much more than a business book. "It's a story of men who want the moon, they get the moon, and then it destroys them."

She is convinced that such a crisis of greed will happen again. "There's more regulation in every country, but the honest answer is that this will happen again, not tomorrow and maybe not exactly in the same way again, but it will. … It's human nature to be competitive, and the Wall Street imperative is about how much you can bend the rules to just be that much more competitive."

She throws her head back. "I am deeply cynical," she trills. "I think what [bankers]have learned is to get better PR."

It's a line spoken by someone who knows.

Author Elisa New delves into her family's path - and rewrites her own future
May 2, 2018 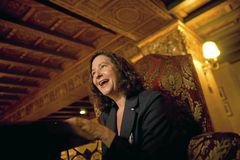 A few awesome things about 1000awesomethings.com's Neil Pasricha
April 28, 2018
Follow Sarah Hampson on Twitter @Hampsonwrites
Report an error Editorial code of conduct
Due to technical reasons, we have temporarily removed commenting from our articles. We hope to have this fixed soon. Thank you for your patience. If you are looking to give feedback on our new site, please send it along to feedback@globeandmail.com. If you want to write a letter to the editor, please forward to letters@globeandmail.com.
Comments