In The Male Brain: A Breakthrough Understanding of How Men and Boys Think, Louann Brizendine, M.D. argues that men are much more interested in sex than women, look for solutions to problems rather than talk about their feelings and are naturally more aggressive. So is the book a breakthrough or merely a support for stereotypes? Globe reporters - and real-life couple - Siri Agrell and Dave McGinn spoke to Dr. Brizendine about what makes the male brain tick.

Siri Agrell: Having written both The Female Brain and The Male Brain, do you think men and women are more different than they are similar?

Louann Brizendine: Remember, we're the same species. So the bottom line is, our brains, our physiology, are more alike than different, but that we have to honour the differences.

Dave McGinn: Is there a fear of people using this book as a licence to behave any way they want?

L.B.: That has a specific medical term and it's called postcoital narcolepsy.

S.A.: And every man in the world has it?

L.B.: During orgasm, males release a huge amount oxytocin in their brain, and it is very mellowing and sedating. It's almost like taking a sleeping pill.

S.A.: So we shouldn't be offended by it?

D.M.: One of the more common relationship stereotypes is that women always want to talk about their feelings and men want nothing to do with it. Is that culture, or is that brain science?

L.B.: There's a lot of individual variation in that, as you may know. Men feel that the list of criticisms is going to come out, that this leads to no place good.

S.A.: So that's socialized then, not biological?

L.B.: That seems to be socialized in terms of feeling like he's going to be criticized. In my office, I often get couples that come in because their sexual life isn't going well and they think it may have something to do with hormones. … I'll turn to him and say, 'John, how do you know Mary loves you?' And he'll say, 'Because she wants to have sex with me.' I'll turn to her - her jaw's on the ground by then - and say, 'Mary, how do you know John loves you?' and she'll say 'Because he wants to talk with me.'

D.M.: Is the male brain really that sex crazed?

L.B.: The area in the hypothalamus [associated with]sexual pursuit is 2.5 times larger in the human male than it is in the human female. And the male brain circuitry, of course, is run on testosterone. And between the ages of 9 and 15 that increases 200 per cent to 250 per cent.

S.A.: Do you worry at all about guys using that to justify their behaviour? It used to be the blue balls syndrome, but now guys can say, 'No baby, my area for sexual pursuit is bigger than yours' and I need to have sex.

L.B.: It's going to be used by men to say, 'This is my biological wiring.'

D.M.: The male brain might have a big area for sexual pursuit or lots of testosterone and the rest of it. But our behaviour isn't determined by these things, is it?

L.B.: You know that you can get sexual pressure, sexual desire and this biological drive being frustrated. And being turned down is no fun.

D.M.: Tell me about it. But does this book mean guys are slaves to those pressures?

S.A.: Why do men want to find solutions rather than talk about the problem itself?

L.B.: Females are always complaining that the man is not taking the time to understand how she feels about something. For example, I'll become upset about something that happened at work and I'll start explaining it to my husband and he'll say, 'Honey, you know what you should do.' He's immediately telling me how to fix the problem. I've put this little yellow sticky on my husband's computer and he has to say this back to me before he says 'You know what you should do.' It says, 'Honey, I know how you feel.' I realized I wanted to hear that from him.

S.A.: What should women's sticky say? What do we not say that they want us to say?

L.B.: I think it's sort of what we don't do. What men want to hear is, 'Honey, do you want to have some fun tonight?'

D.M.: Always with the sex. But maybe not, because in the chapter about what you call the mature brain, which typically develops in a man's 50s, it was interesting to read about the hormonal changes that occur in the brain and I'm wondering if I'm going to become a woman.

L.B.: You're not going to become a woman, but your body and brain are making more estrogen.

D.M.: Ultimately, what do you think people should take away from this book?

L.B.: I wrote the book for women about men. It certainly gave me a much deeper appreciation for men, men's experience, the male brain. My objective would be to have women be able to see the world through male-coloured glasses after they've read the book. 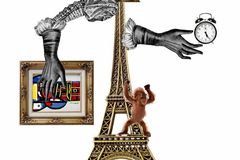 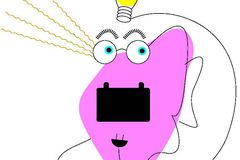