Because there are very few academic programs or courses devoted specifically to editorial cartooning, people become cartoonists in a number of different ways. In Brian Gable's case, the desire to draw cartoons began as a preschooler in Saskatchewan, where he was born, raised and educated. He drew compulsively and was encouraged to do so by both parents. This urge to draw continued throughout his formal schooling and was frequently conducted on the margins of texts and notebooks.

A total lack of even the most basic comprehension of university-level calculus inspired him to abandon pre-architecture for fine arts, where at last drawing was considered a respectable thing to do.

His first real editorial cartoons were published in The Sheaf, the University of Saskatchewan's student paper. The next opportunity came as a freelancer for the Brockville Recorder and Times in Eastern Ontario. Then came seven years as a full-time editorial cartoonist for the Regina Leader Post and finally, in 1987, he was hired as an editorial cartoonist here at The Globe and Mail. 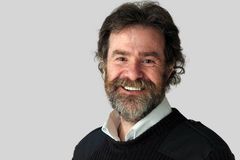