Rio’s Olympics have faced their share of challenges already – Zika virus, polluted water, violence. But the Games may never have had a more stunning locale: Rio’s mix of mountains and beaches, luxury and hardscrabble, Art Deco and cobblestones, make for a city like no other. It has staggering wealth disparities, and has a serious public security crisis. It’s also drenched in music, with an easy-going, party-loving culture, and it inspires fierce devotion in Cariocas, those who are born and bred here. This is a peek into the life of the city, as it prepares to welcome the world. 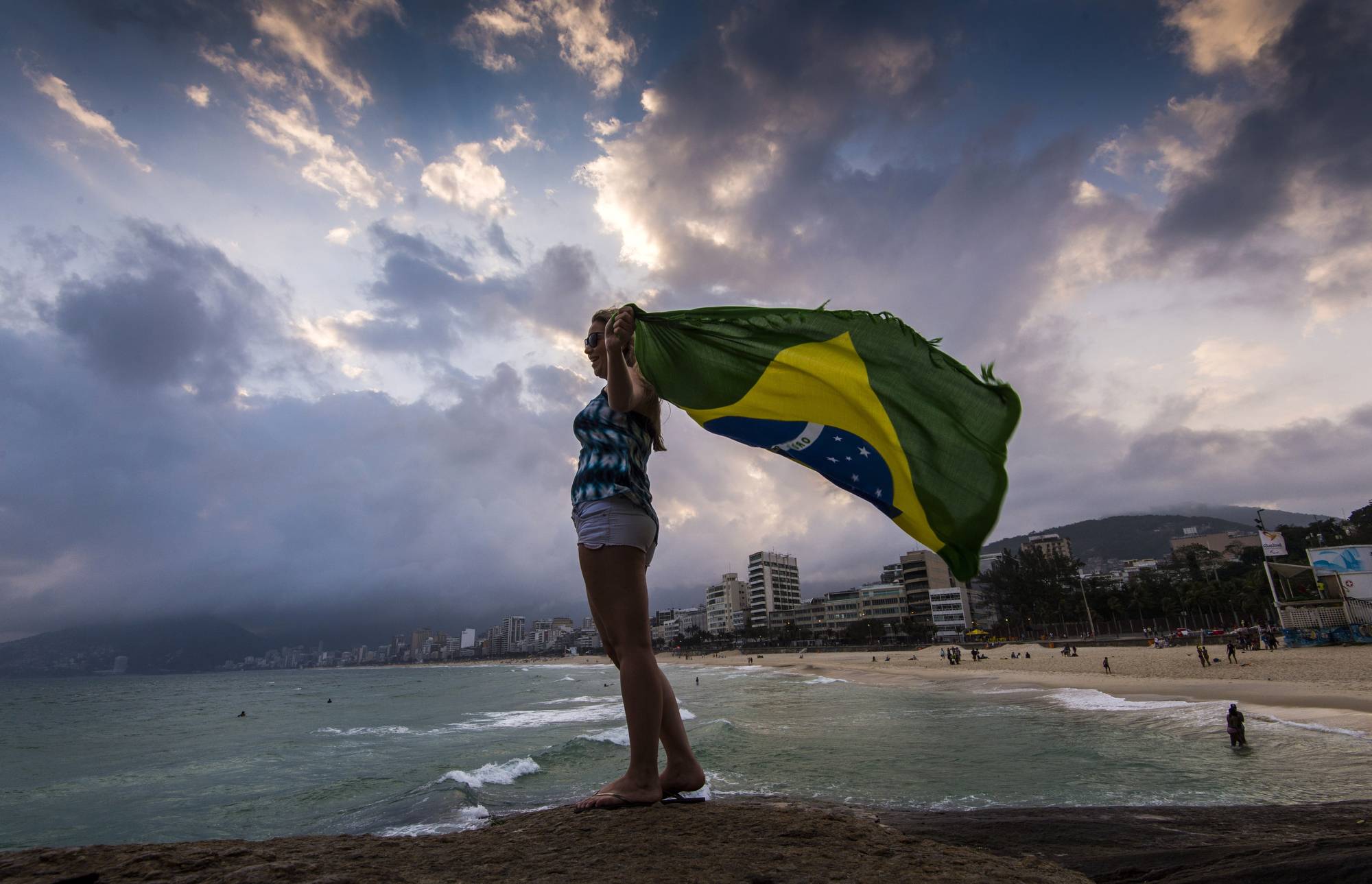 Brazil is deep in the throes of a political crisis and a crippling economic recession. There's the Zika epidemic, and a giant corruption scandal. The Olympics, if they go off without disaster, may give the country a brief moment to be proud again. Here Bruna Zenezini, visiting Rio from Sao Paulo, poses with the flag while a friend takes pictures on the beach in Ipanema. 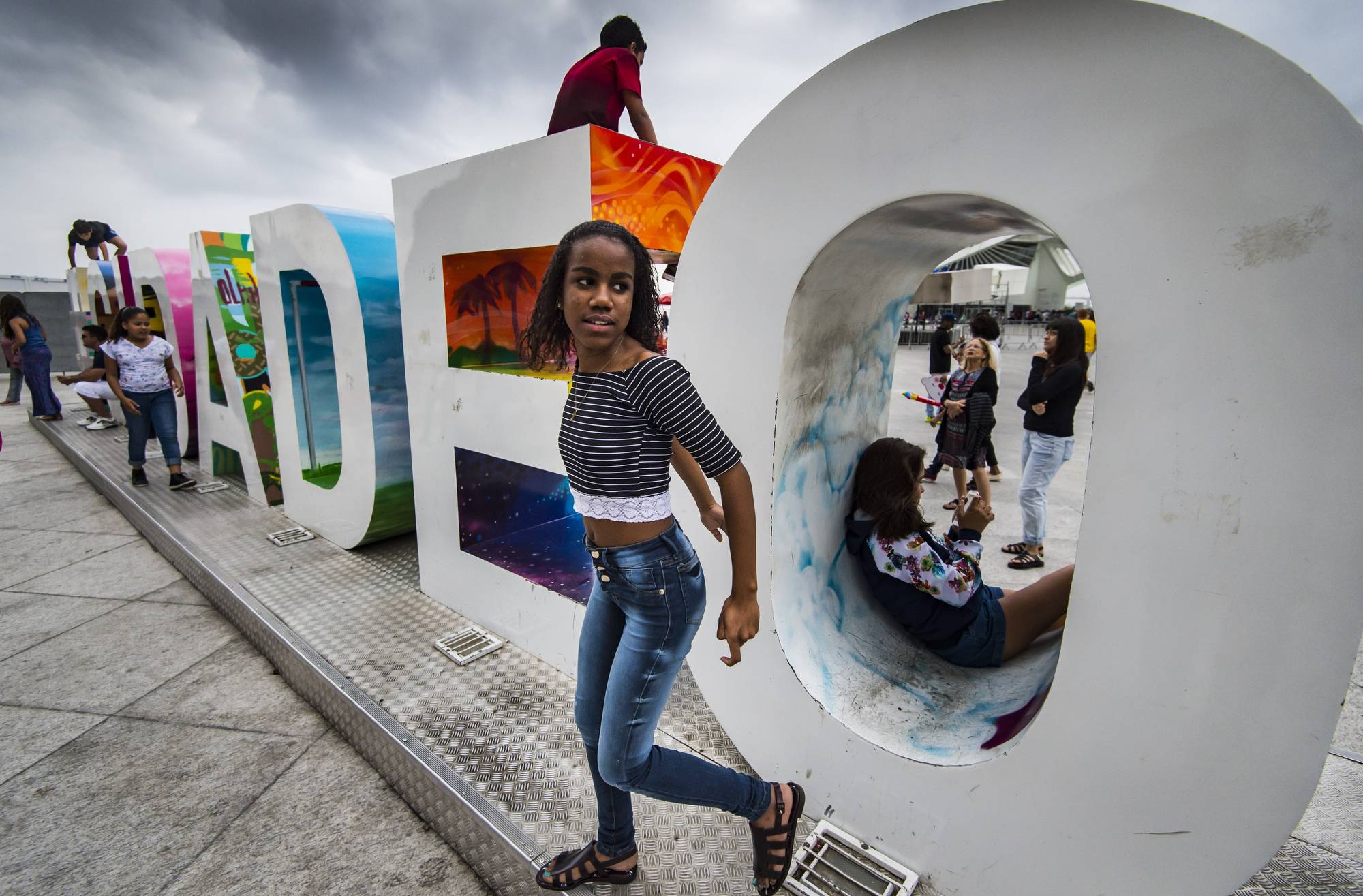 Giant letters spelling out Olympic City have become a popular attraction in Praça Mauá in the heart of the city. The old port area underwent a $3.3 billion overhaul as part of the city's Olympic preparation. The historic square, once choked by a highway overpass and plagued by crime, is a surprise new favourite destination for the people of Rio. But people from the surrounding neighbourhood have a critique as well: this patch of the city was once the core of the slave trade, when Rio was the world capital in the traffic of humans. There is monument to that era in the redevelopment, no acknowledgement of the history's dark past or the African roots of many who still live nearby. 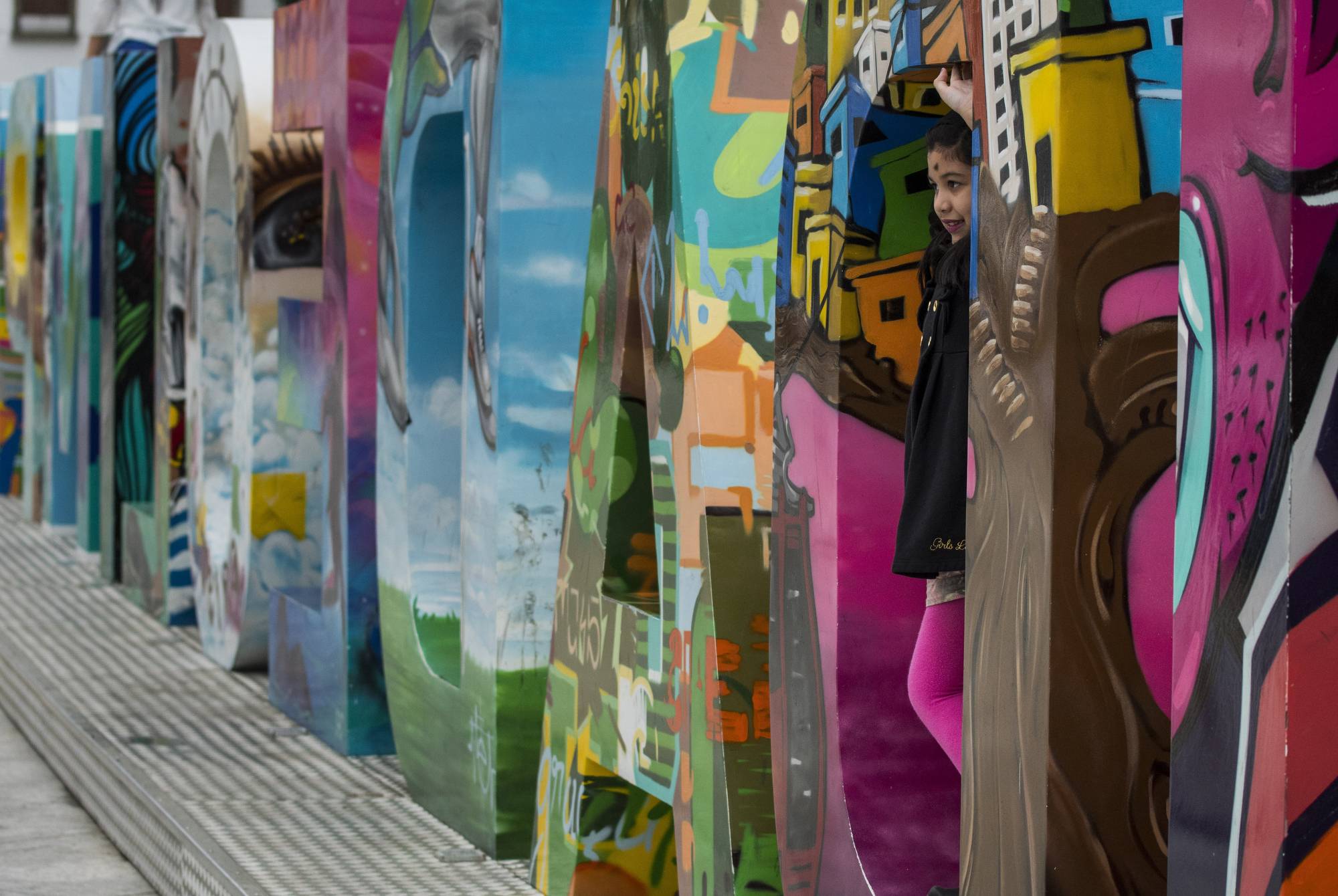 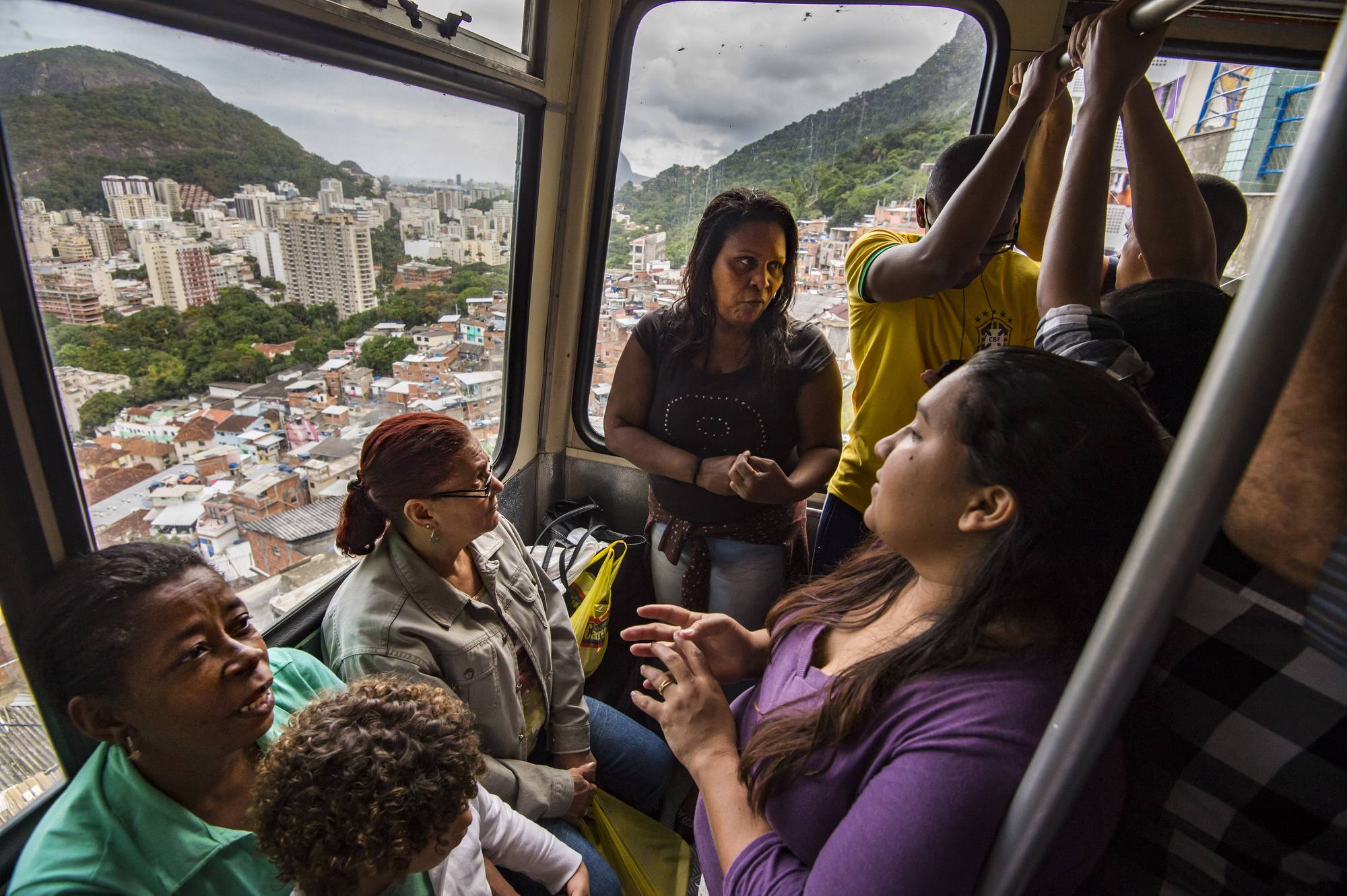 In 2008, the state of Rio embarked on a bold new experiment to tackle Rio's crisis of public security. The city was dotted with favelas controlled by gangs that made their money controlling the drug trade and extorting residents; those areas were no-go zones for the state. So the state selected communities — starting with this one, Santa Marta — using elite forces to drive out the gangsters and then sent the Police Pacification Units (or UPP in Portuguese) in to hold the territory and build new relationships in the community. Then the state moved in to bring residents benefits such as this teleferico, making it easier to reach the top of the hillside community. The UPP effort has fallen apart in much of the city, due to a lack of strategy, resources, training and the loss of community support because of police abuses. But communities such as Santa Marta have gone some way to being included in the city proper. 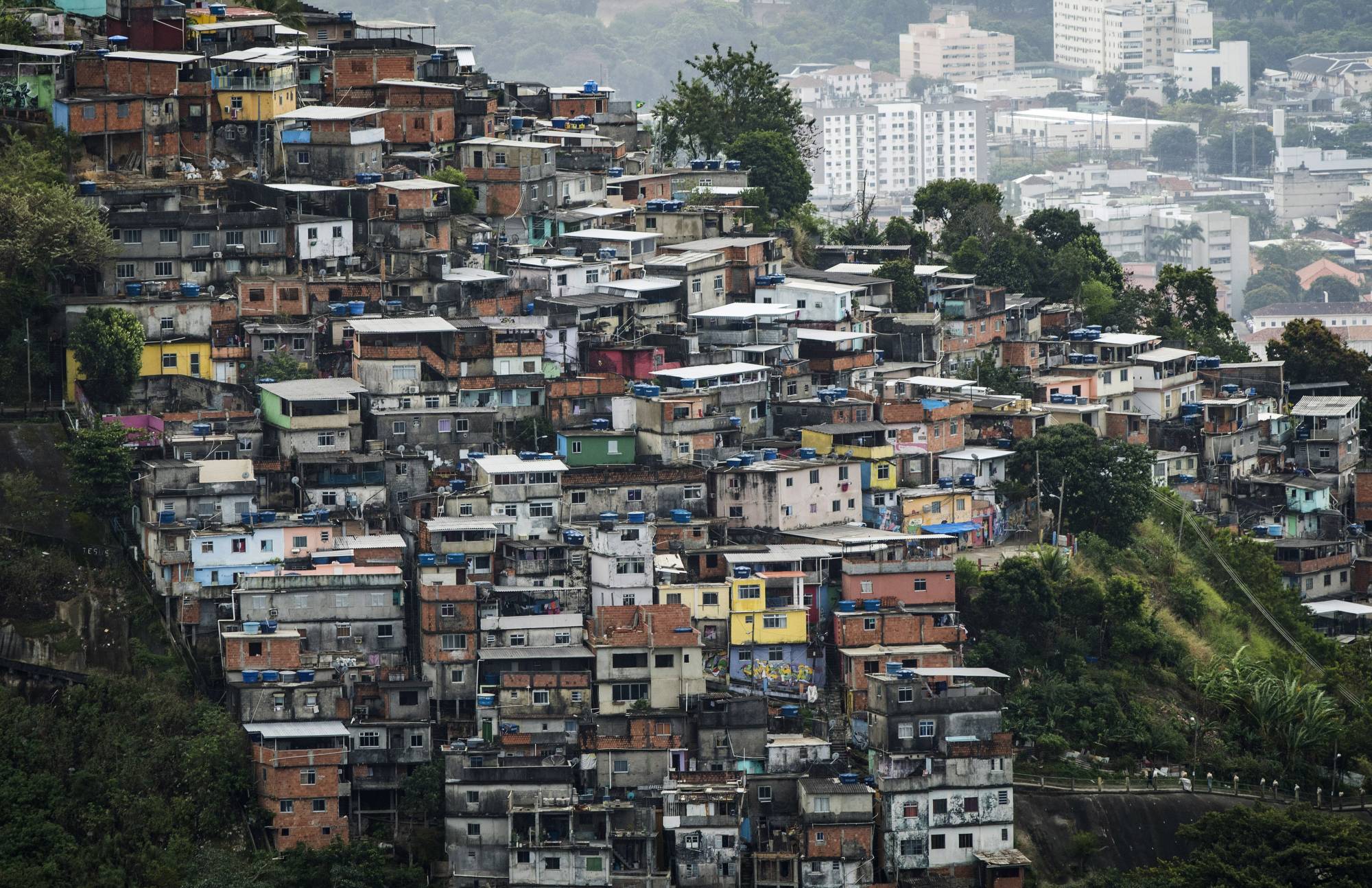 A favela on the side of Morro Dona Marta. 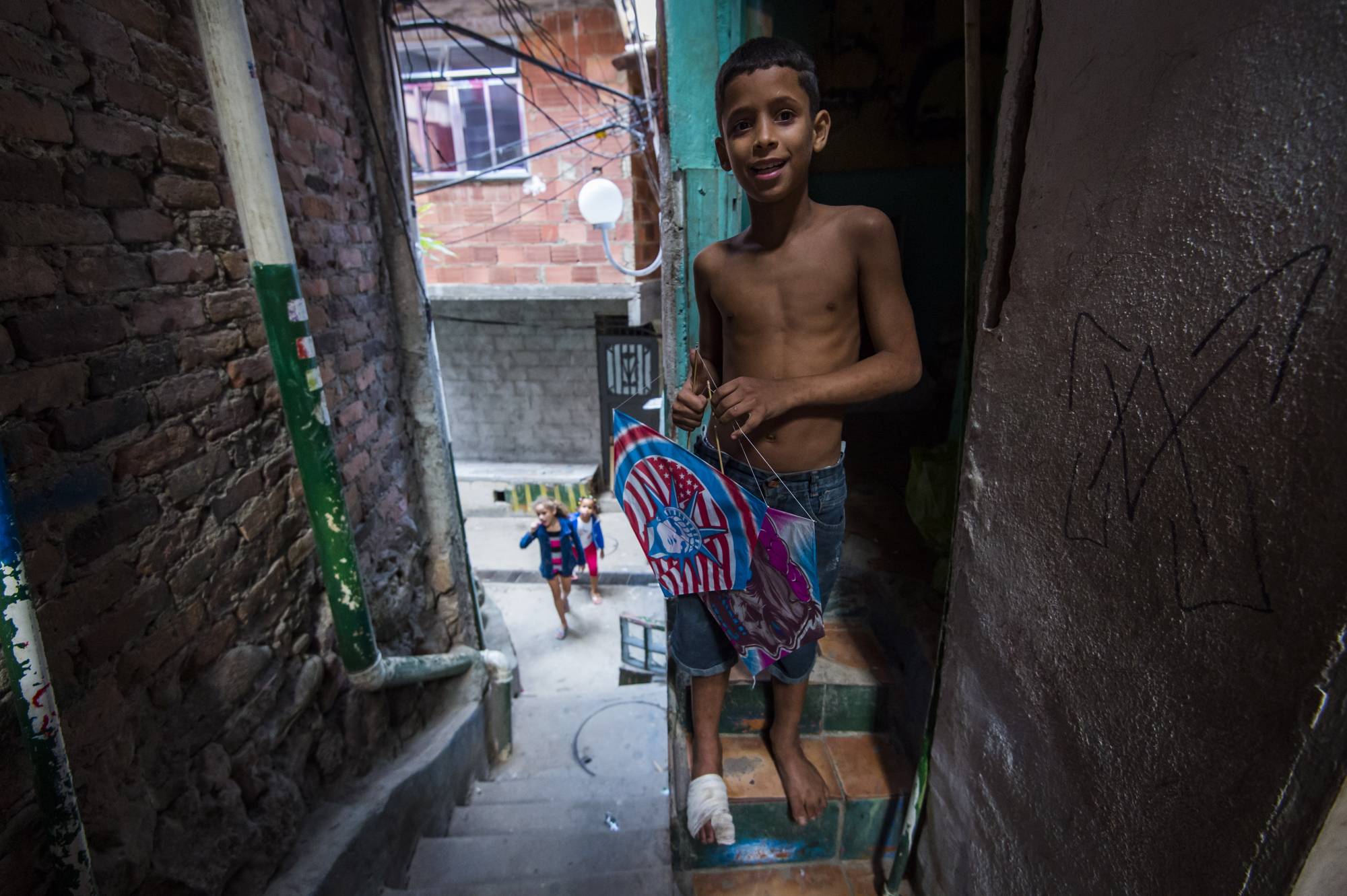 One in five residents of Rio, such as Nitalo Gouvea, 10, shown here near his home in Santa Marta, live in favelas. These communities have a a distinct culture, of neighbourlines, flashy fashion and the pounding groove of baile funk. But the great majority lack connections to public sanitation lines, proper garbage collection, safe electrical systems and public transportation. Favela kids such as Nitalo drop out of school at three times the rate of children in non-favela neighbourhoods. So while residents of Rio are eager to show off their city to the world over the next few weeks, they are also asking — what else could we have done with this money? 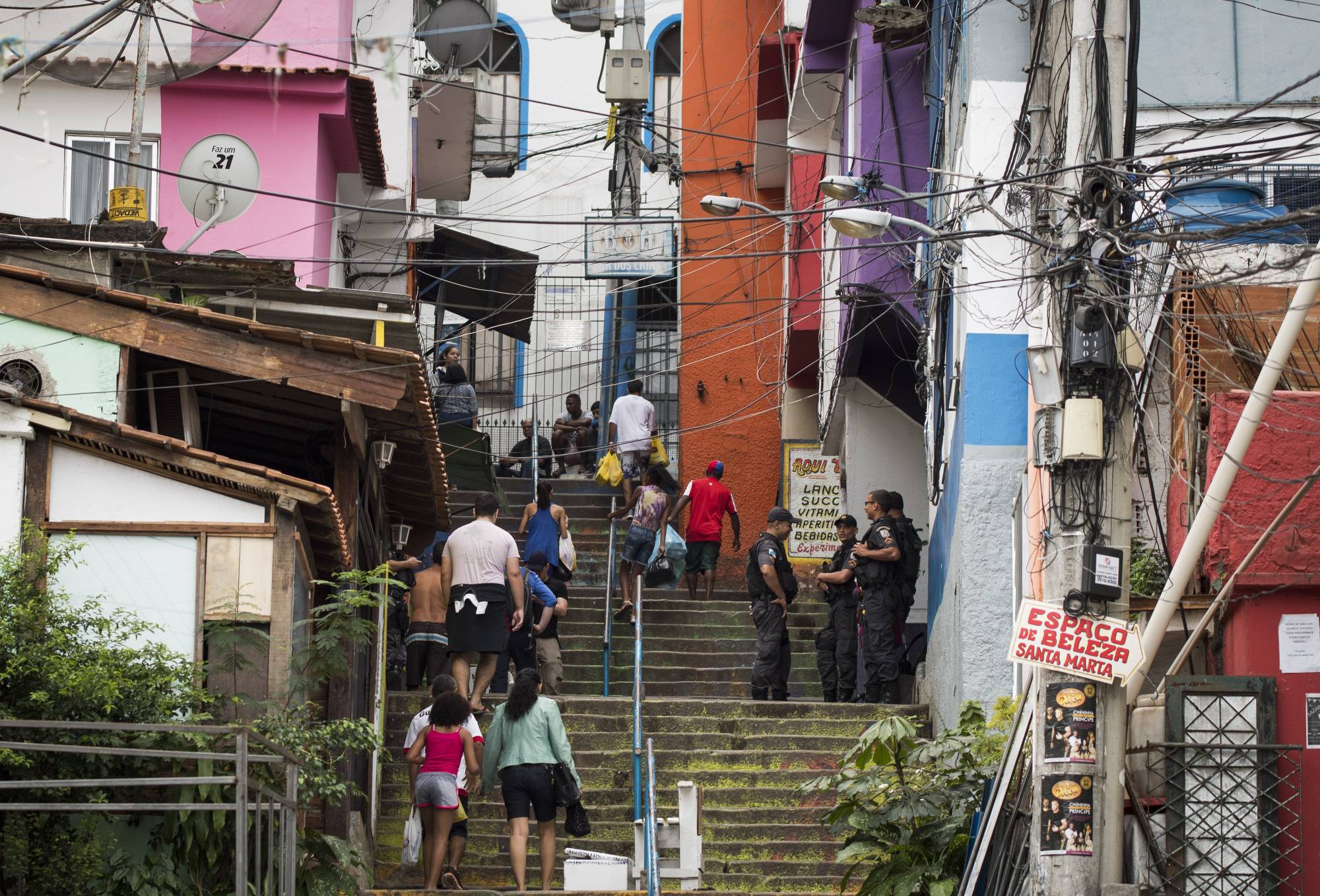 Many favela residents were skeptical but hopeful when the Pacification Police Units were first deployed in 2008. But the officers came from a long tradition of viewing favelados as the enemy, and police were once paid a bonus for the number of suspects they killed. The change of mindset didn't come quickly, and after some egregious police abuses of human rights, the population lost faith. Today the communities with UPPs have an uneasy co-existence at best, as here in Santa Marta, or, often, an almost daily exchange of gunfire between the "pacification" police and gang members. 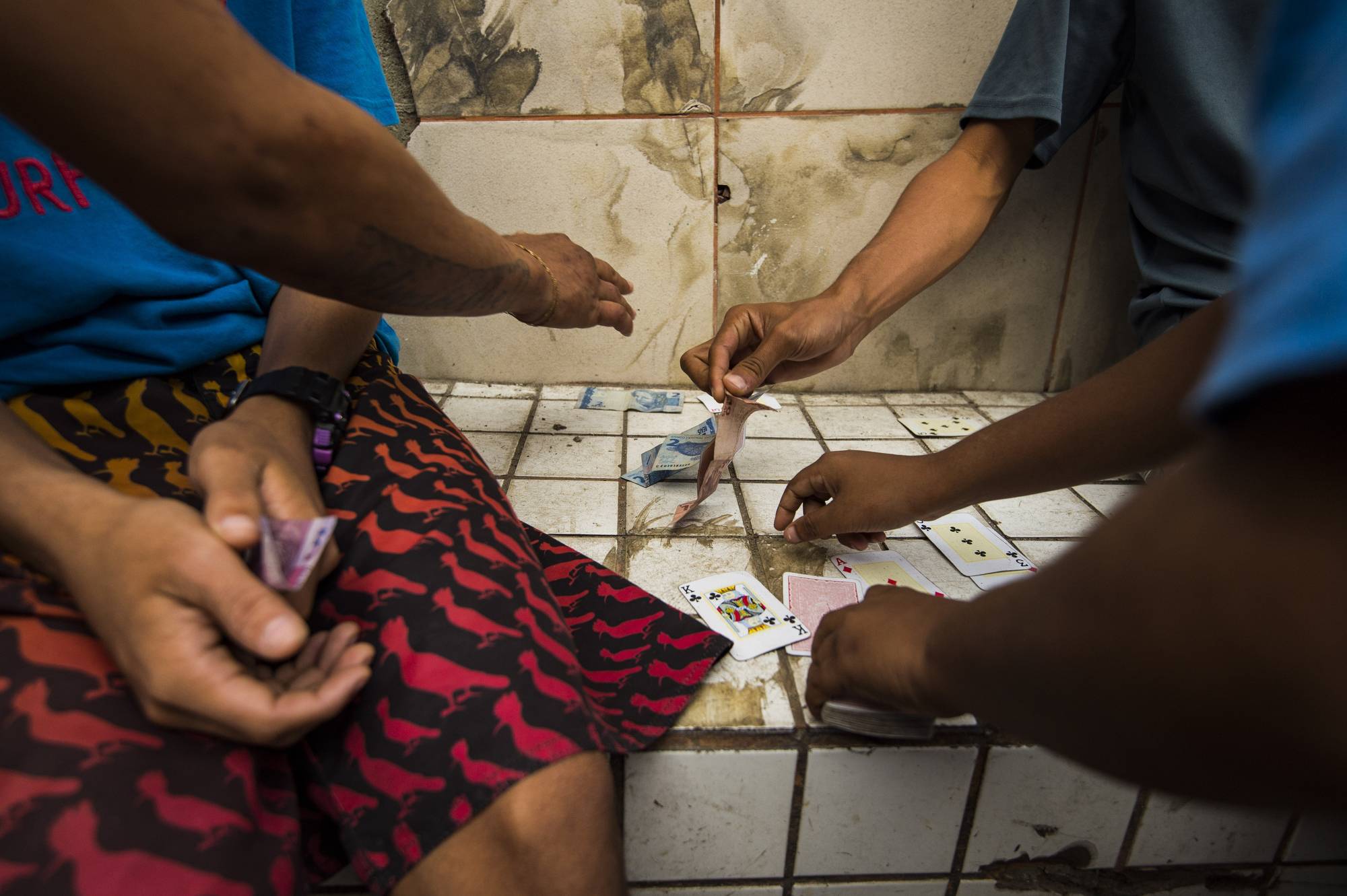 A group of boys gamble in Santa Marta. 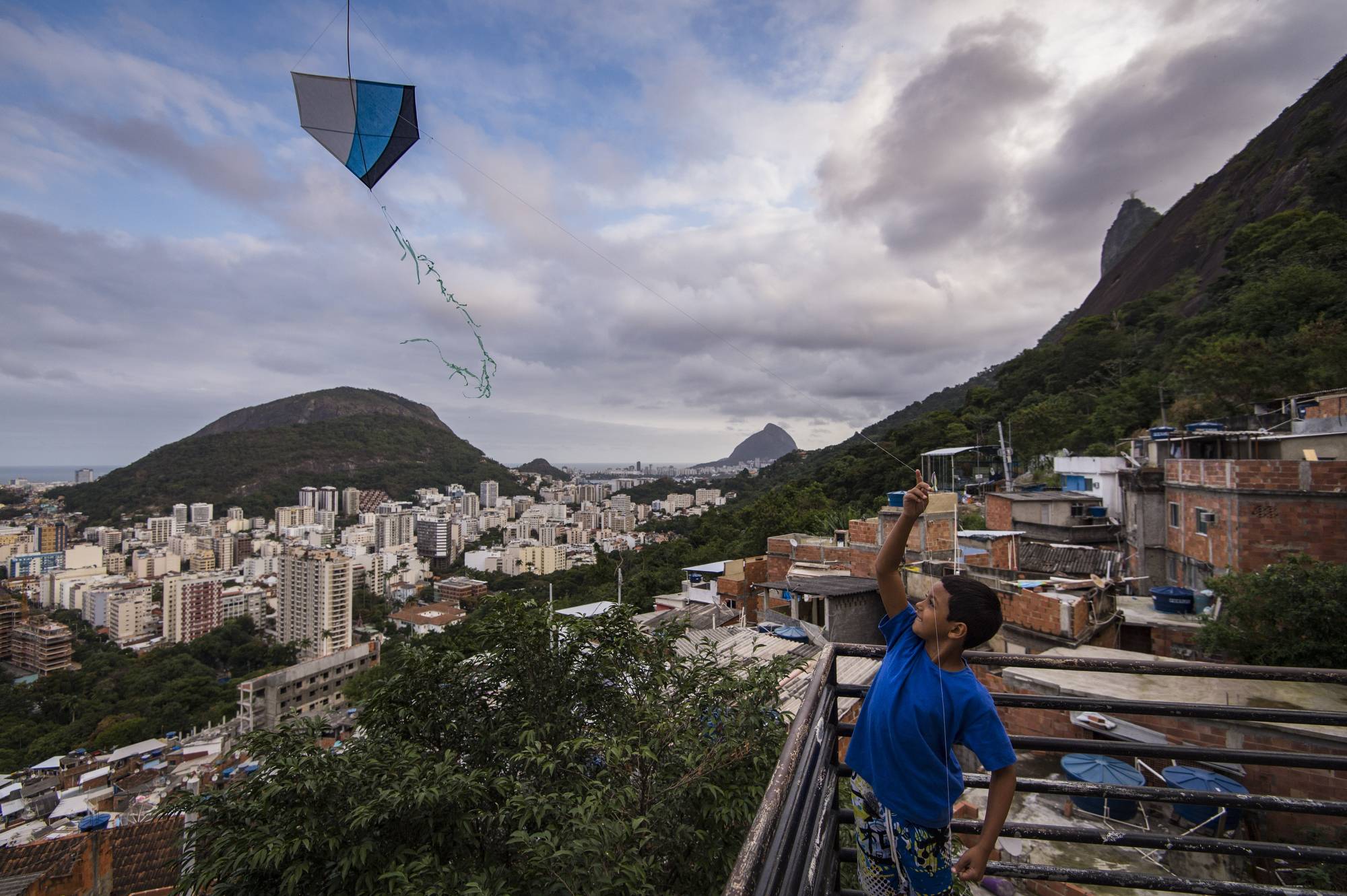 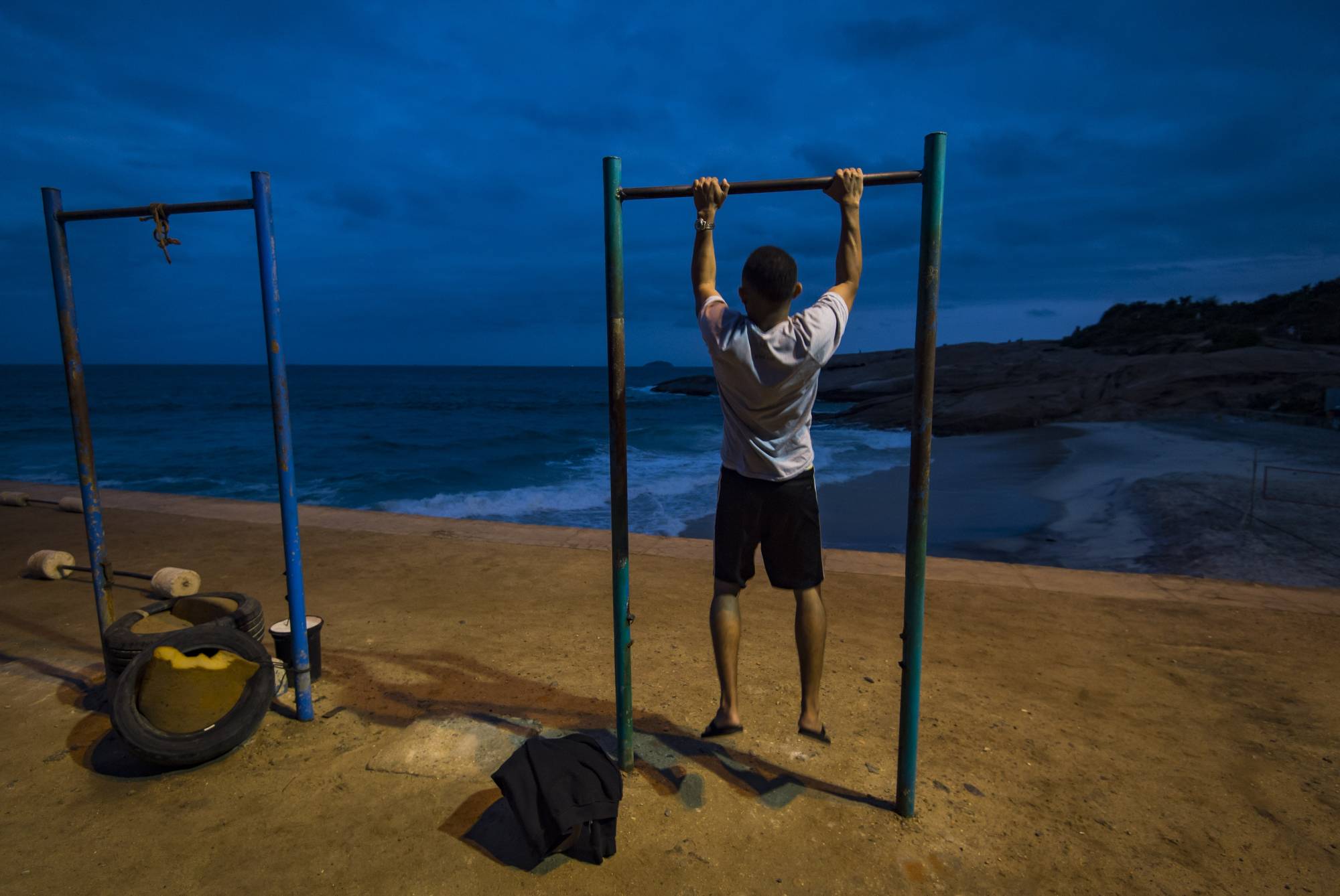 The beachfront neighbourhood of Aporador in the city's South Zone is home to an outdoor gym known as the Flintstone Academy. The weights are homemade, cement blocks cast out of old butter buckets. It was built by an eccentric local and is lovingly maintained by residents. Rio has a vibrant fitness culture; the young and the beautiful flock to these workout spots that allow for strategic showing off, but plenty of potbellied older folks, and slope-shouldered elderly, make their way to stroll the beach and do some stretching too. 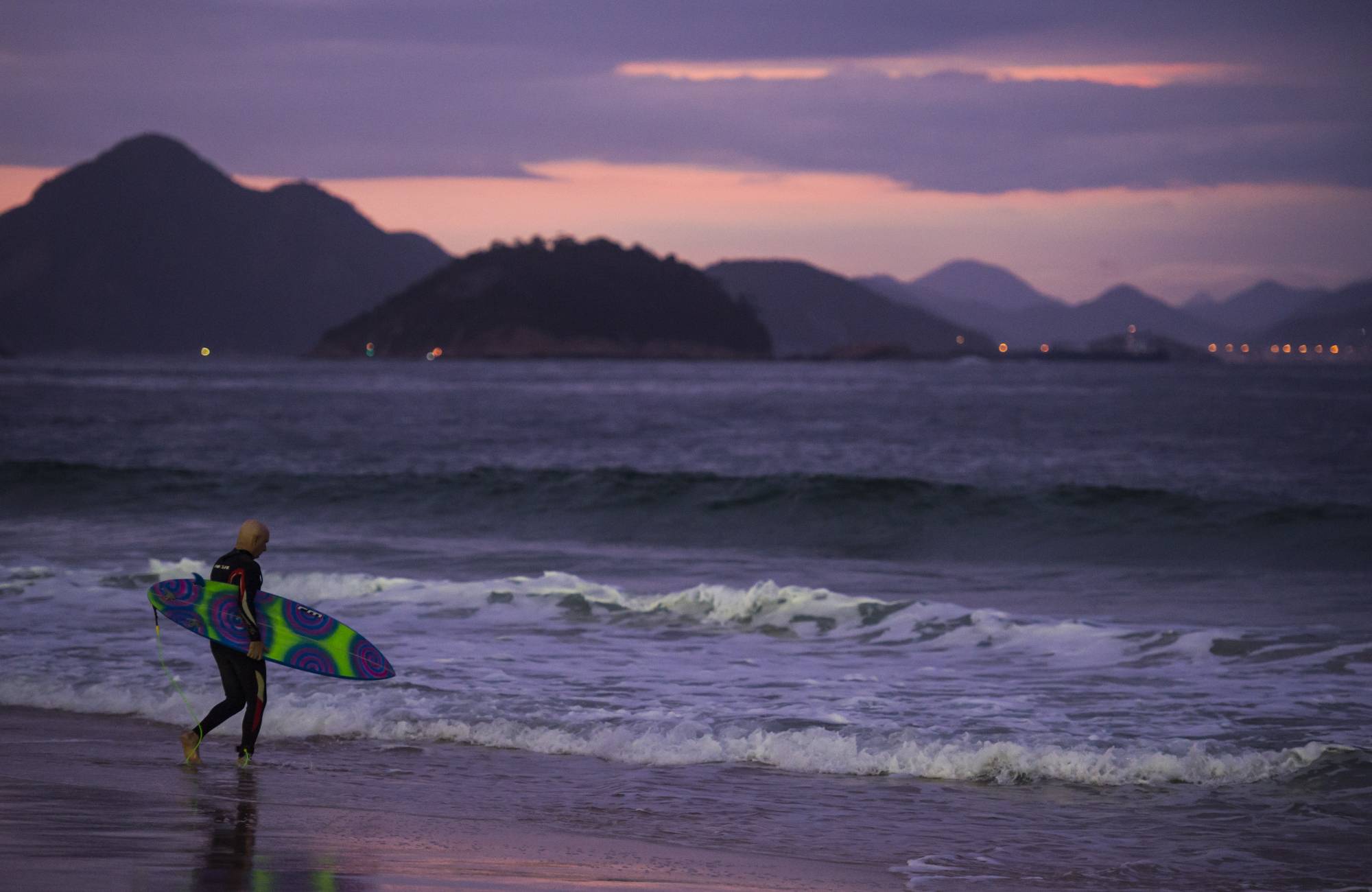 A surfer wades into the surf at Copacabana Beach in Rio. 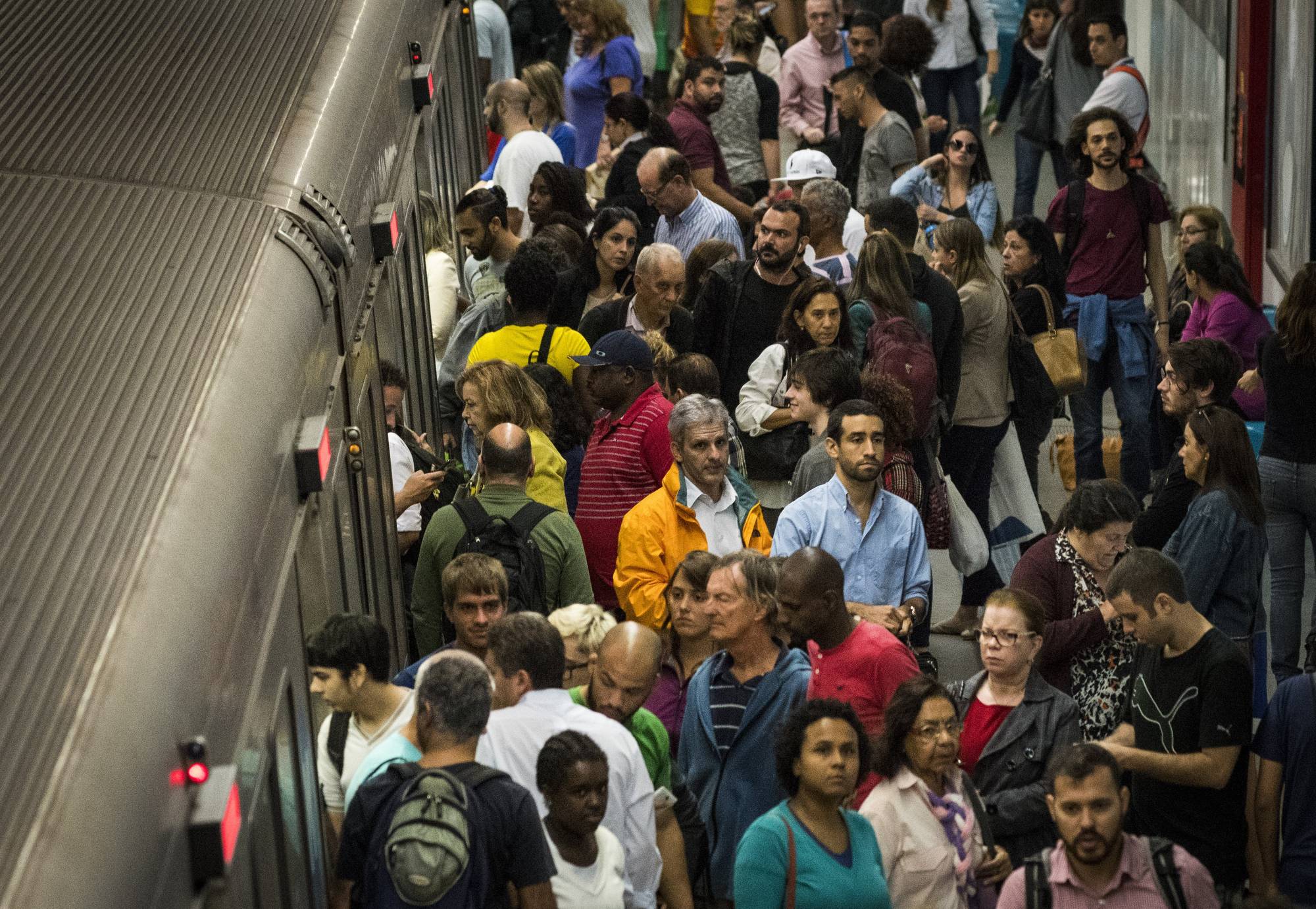 Transit riders make their way through the Botafogo metro station in Rio. 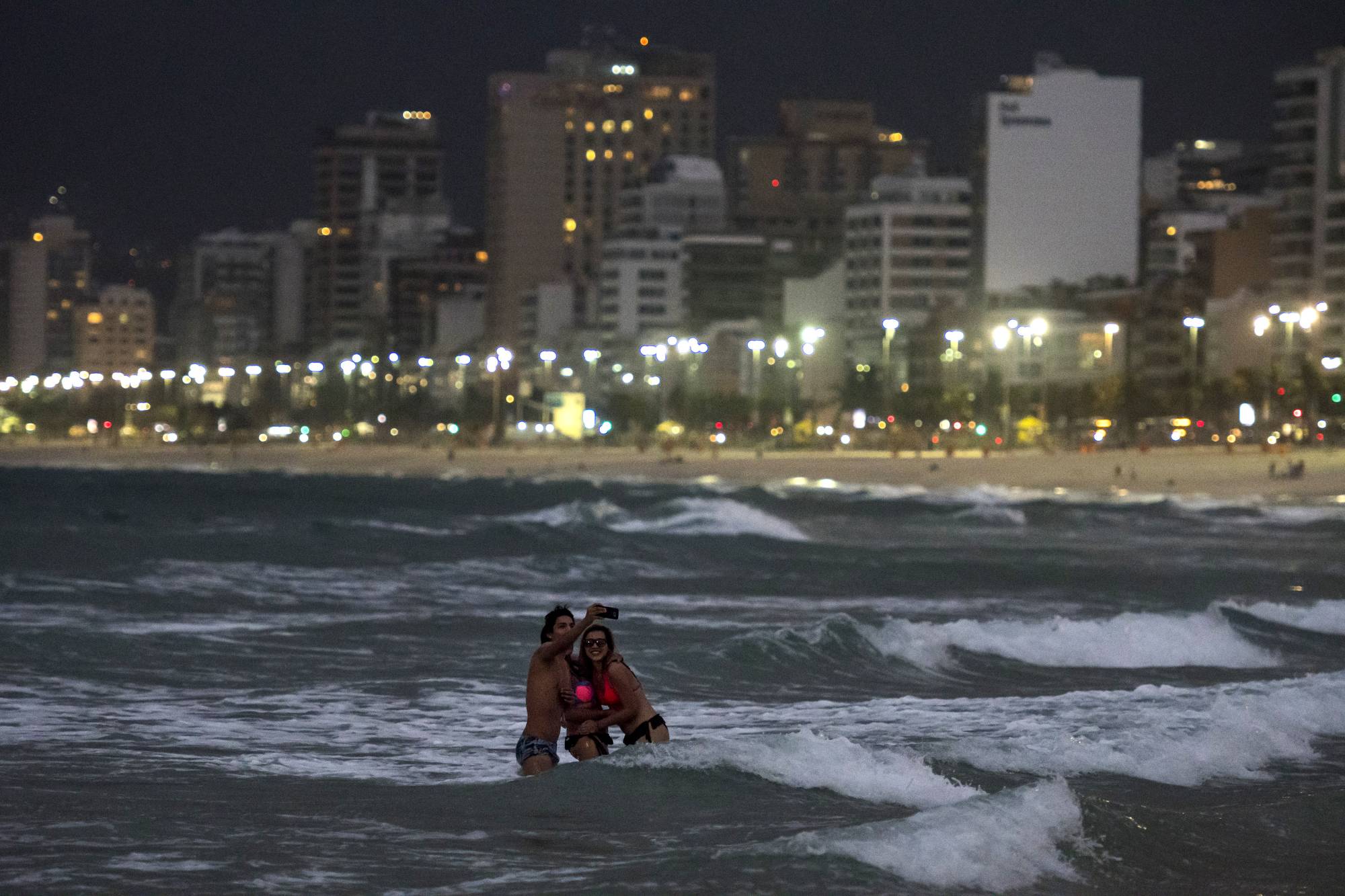 Swimmers pose for a selfie in the surf of Ipanema Beach. 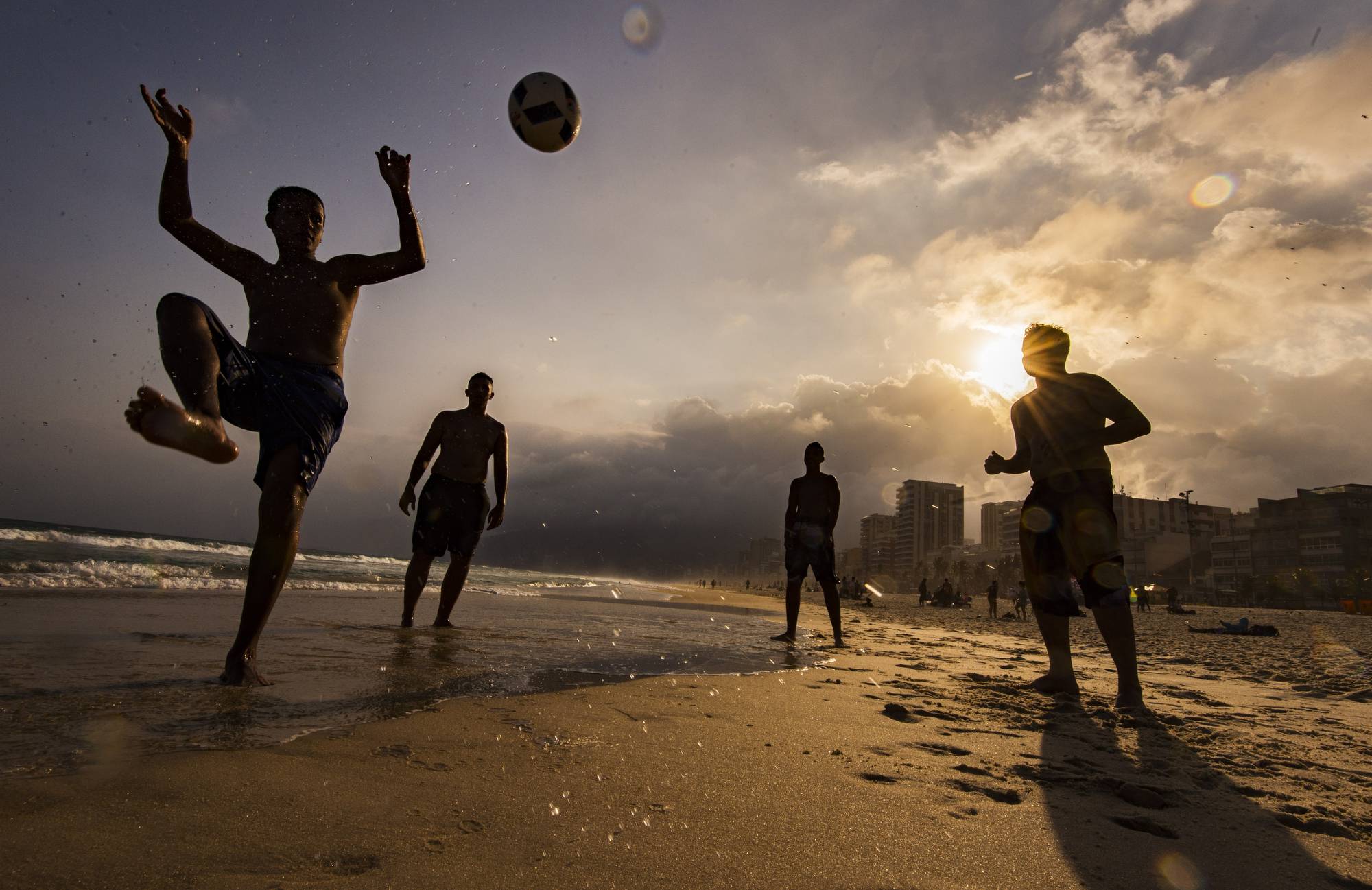 The Olympics may be in town, but there is really only one sport in Brazilian's heart. There is a football game underway somewhere in this city all day, and all night, too. But it's a men's game in Brazil: few girls or women play, and the excellent national women's squad plays in near-obscurity. Here young men play altinho, or keepie-uppie — a deceptively difficult, very Rio, game, like hackie-sack with a football — on the beach in Ipanema. 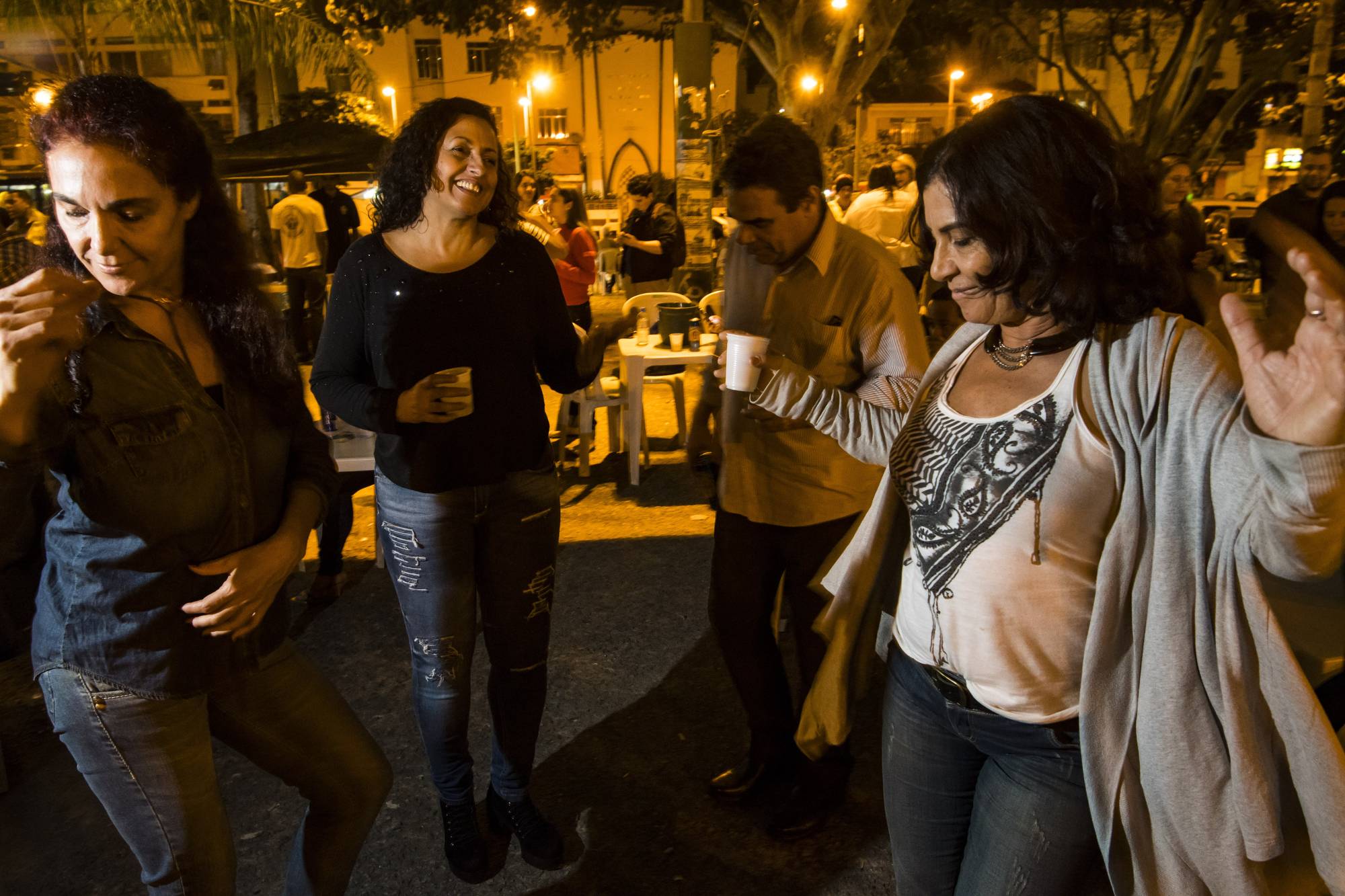 The outside world knows Rio's samba tradition through the giant parade and competition, an extravaganza of feathers and sequins, that happens each year during Carnaval. But any night of the week there is a roda de samba happening somewhere in the city, with musicians seated around a table and everyone else dancing. Samba has its roots in the African rhythms brought by slaves, which fused with the musical traditions of European immigrants. Here, women dance at an informal roda that happens each Wednesday night in Vila Isabel in the city's north zone. 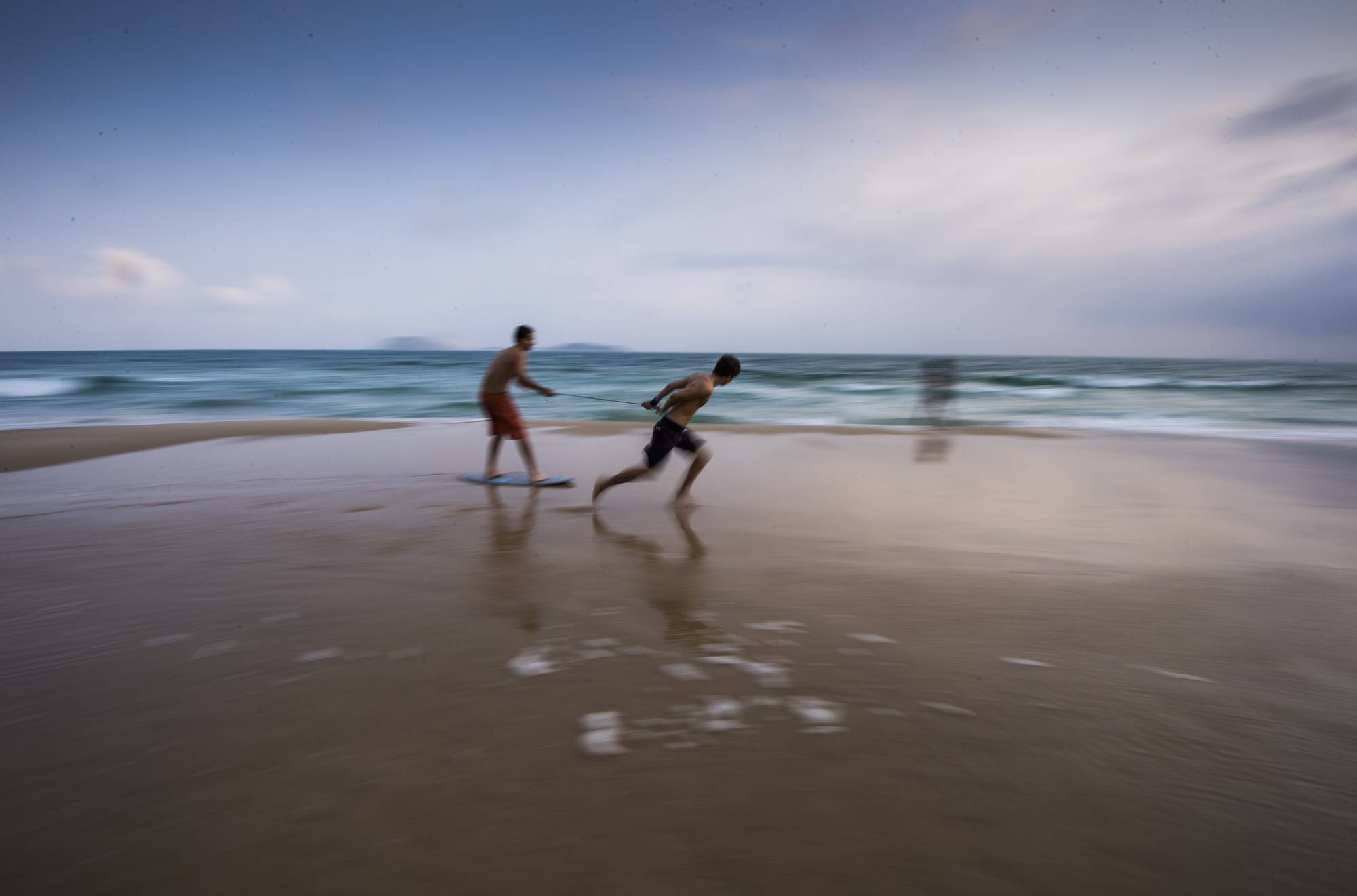 Wakeboards on Ipanema Beach in Rio. 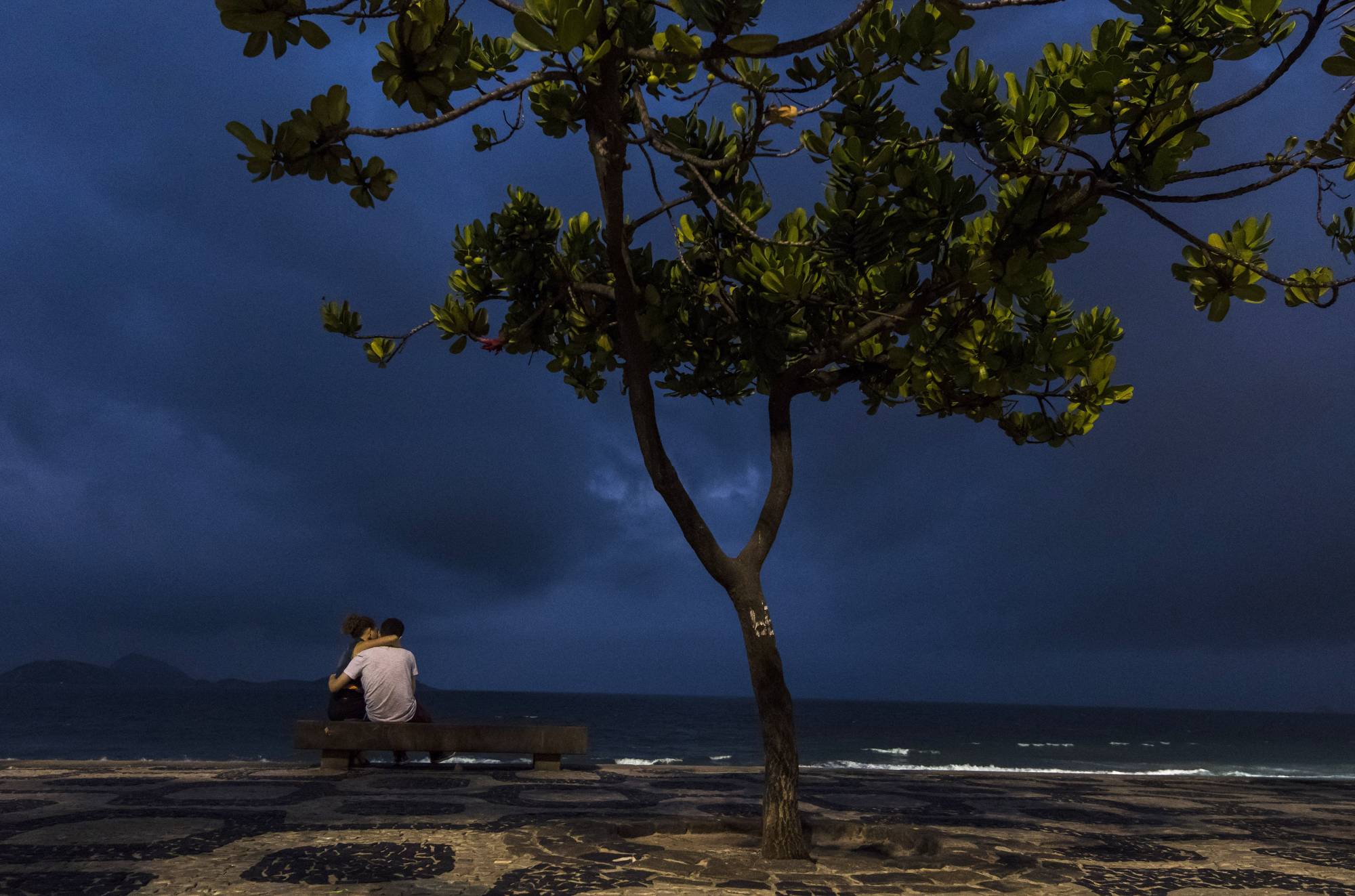 A couple embrace on Ipanema Beach.