The Alberta government's commitment to keep spending on projects such as schools and hospitals combined with its continued reliance on energy royalties despite a significant drop in that revenue means it is unlikely its next budget will reduce the deficit.

Premier Rachel Notley will release Alberta's 2017-18 budget Thursday, and has already telegraphed that the New Democratic Party will not chop services to more quickly balance the books. While the government argues its programs, such as boutique tax credits and infrastructure projects, are designed, in part, to juice Alberta's economy, they are not enough to fill the revenue void depressed energy prices created.

Alberta has previously said it does not expect to balance the books until 2024. The NDP, when it released its 2016-17 budget last April, predicted the deficit would hit $10.1-billion in fiscal 2017-18. The government also expected its 2016-17 deficit to ring in at $10.4-billion, but has since said the revenue shortfall will be roughly $444-million more than its original forecast.

Scores of policy experts have, for years, pushed Alberta to implement a sales tax to avoid the financial volatility that comes with relying on oil and gas revenue. While the province has introduced a bevy of new taxes, observers say the government will once again shun such a proposal.

"It would be the most stable revenue stream we could have," Keith Brownsey, a political science professor at Mount Royal University, said Wednesday. "[But] I do not expect that. I would be gobsmacked. Shocked. Flabbergasted. I would look outside and see that the moon was made of blue cheese if we had a sales tax announced."

Harold Jansen, a political science professor at the University of Lethbridge, predicts the budget will be short on spending restraint. He, too, favours a sales tax to fund public services rather than Alberta banking on an energy rebound.

"Nobody likes to pay more in taxes," Dr. Jansen said. "But people also like high-quality schools and don't want to wait too long in emergency [rooms]. People want those things, too.

"We're at the point where we have to choose," he said. In Alberta, however, introducing a sales tax would be the fast track to being punted from power, observers say. Ms. Notley's government is already facing criticism for its carbon taxes and other levies.

The NDP, Dr. Jansen said, has "just been waiting for the price of oil to go up" so it does not have to make difficult budgetary decisions.

The budget comes two days before Alberta's Progressive Conservative party selects a new leader. Jason Kenney, a federal cabinet minister when the Conservative Party of Canada was in office, is the front-runner. He is explicitly campaigning on a pledge to unite Alberta's PCs with the Wildrose Party to unseat the NDP in the next election. These two opposition parties favour spending cuts and widely reject the government's climate-change plan, which includes the carbon levies.

Judith Dwarkin, RS Energy Group's chief economist in Calgary, wants the government to be cautious in its energy-price estimates, which form the basis of Alberta's budgets. The NDP, she said, would be wise to assume oil will average around $55 (U.S.) a barrel next year. Potential spoilers, however, include oil production in the United States improving faster than expected and the Organization of the Petroleum Exporting Countries rejecting production restraint.

West Texas intermediate crude, the North American benchmark, traded at an average of $48 a barrel in the third quarter of the current fiscal year. The province, in its 2016-17 third-quarter update in February, hinted it believes the energy market is rebounding.

"The impact of the oil price shock on the Alberta economy appears to be subsiding. Many economic indicators are showing signs of stabilization or in the early stages of recovery, including employment, drilling and manufacturing," the government said then. 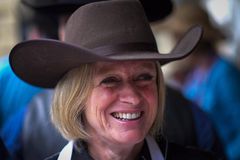 Alberta to invest $14.5-million to ease court delays
April 14, 2017
Follow Carrie Tait on Twitter @CarrieTait
Report an error Editorial code of conduct
Due to technical reasons, we have temporarily removed commenting from our articles. We hope to have this fixed soon. Thank you for your patience. If you are looking to give feedback on our new site, please send it along to feedback@globeandmail.com. If you want to write a letter to the editor, please forward to letters@globeandmail.com.
Comments