The Living Water College of the Arts is a mile down a grid road just outside Derwent, Alta. Its primary building is a large white affair. It takes up a smidgen of a quarter section of farm land, with rotting wooden buildings and native bush a few metres away.

Derwent is barely a hamlet.

Living Water advertises programs but has no students. The college's purple crest and Latin motto are on a sign at the end of the laneway. Artes, Fides, Ratio. Translation: Arts, Faith, Reason. An open book with a V in the corner is part of the crest. The V stands for veritas, meaning truth. The sign has been vandalized; the book alone has two bullet holes.

This building, the land it sits on, and Living Water's ownership, are part of what the Alberta government alleges is a multimillion-dollar scheme to siphon money away from home schoolers to a religious farm family in rural Alberta. The allegations involve a web of entities – Living Water, Trinity Christian School Association, Wisdom Home Schooling Society of Alberta and Lone Spruce Farm – with close ties to Derwent residents Kenneth and Marlane Noster.

Alberta yanked Trinity's home-schooling credentials in October, alleging it was not in compliance with provincial regulations and that it mismanaged funds. Trinity outsources its home-schooling operation and most of its finances to Wisdom. Therefore, the government's decision effectively shuttered Wisdom and Trinity.

The Nosters are closely tied to both entities: They founded Wisdom. Mr. Noster is Trinity's associate principal. The husband and wife also founded Living Water and own Lone Spruce Farm. Living Water and Lone Spruce collect rent from Wisdom, which gets its money from Trinity, which is funded by the government, according to court documents.

Living Water's plain white building, with its four Greek-style columns, is a key example of the government's allegations against Trinity and Wisdom – explained in court documents – of self-dealing leases, irregular accounting and misappropriation of funds.

The lawyer for Trinity and Wisdom says the government's version of the facts has omissions and is unreliable.

"What has been claimed by Alberta Education is at the very least woefully incomplete and at the very worst is evidence of withholding of pertinent documentation," the lawyer, Jay Cameron, said in an interview on Thursday.

As the sides battle over the building, 3,491 students wait for a court to decide Trinity and Wisdom's fate.

Alberta shuttered Trinity and Wisdom's program in October. But court documents show the province first flagged troubles at the home-schooling operation in 1997. Despite years of warnings over financial and organizational problems, followed by occasional corrective changes, the government let things slide until this fall.

Closing the operation was "not easy, but sometimes you've got to take action when it becomes obvious that there is irregularity," Education Minister David Eggen said in an interview in October.

Trinity and Wisdom obtained an injunction allowing operations to resume, and documents filed in that court battle provide greater clarity on the accusations and the responses.

The Nosters' fourth-generation family farm is just outside Derwent, about 190 kilometres east of Edmonton. They are active in the community, largely through the town's St. Joseph's Roman Catholic Church, locals say.

The couple raised six children, educating them at home, and employ them at Wisdom.

In 2001, Trinity started constructing the Wisdom Centre – the white Living Water building – on the Noster's land, the government alleges. Trinity paid for it with grant money from Alberta Education, the province says. Trinity's capital cost was $560,083, according to Alberta's reading of the organization's audited financial statements.

Trinity's 2006-2007 audited financial statements record a loss of $410,083 attributed to the sale of the building, the government alleges, indicating Trinity sold the facility for $150,000. Living Water is described as the buyer, court filings show.

The government also alleges the building was never Trinity's to sell.

The government says records show the Nosters subdivided the field in 2008 to transfer 10 acres to Living Water. The price was $1.

Wisdom and Trinity say that only after the building was finished were they informed government money should not have been used. The government, they say in court documents, insisted Trinity sell the building because it incurred the cost of construction.

Alberta Education approved the "salvage price" of $150,000, according to the court documents filed by Trinity and Wisdom. Their lawyer, Mr. Cameron, said in an e-mail that he understands the government approved of Trinity selling it to Living Water.

Both sides agree that at the time of the sale, the building was on land owned by the Nosters. Trinity and Wisdom argue the couple would have donated the land to Trinity had Alberta not forced the organization to sell.

Eventually, Trinity and Wisdom say, the Nosters donated the land to Living Water for $1.

Meanwhile, Wisdom paid Lone Spruce Farm $493,800 over the past four fiscal years to rent a small building a few metres from the Nosters' home, sharing a gravel lane and parking area. Mr. Noster signs on behalf of Wisdom; Ms. Noster on behalf of their farm.

The government alleges the deal lacks independent oversight and the price is excessive. Trinity argues the Nosters upgraded Wisdom's office, take care of issues such as snow removal and security, and note that rent in the area jumped during the energy boom.

"This rental has been recorded and reported by independent auditors each year," a Trinity executive said in a court filing. "[Alberta] Education has not identified it as a problem nor suggested that it should be changed." 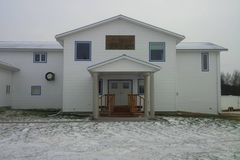 Alberta home-schooling agency gets temporary reprieve
November 4, 2016
Albertan Christian homeschooling organizations ask closing be reversed
November 2, 2016
Follow Carrie Tait on Twitter @CarrieTait
Report an error Editorial code of conduct
Due to technical reasons, we have temporarily removed commenting from our articles. We hope to have this fixed soon. Thank you for your patience. If you are looking to give feedback on our new site, please send it along to feedback@globeandmail.com. If you want to write a letter to the editor, please forward to letters@globeandmail.com.
Comments are closed