Since Alberta's New Democratic Party was founded in 1962, it has been an afterthought, a slim opposition and at times near death, but it has never posed a serious threat of forming government. With less than two weeks to go in the current campaign, Rachel Notley might just change that.

The NDP Leader has something to prove: that after nearly 44 years of Progressive Conservative rule, Albertans are finally ready for something new – that a magnet province of rapidly shifting demographics is not as conservative as many believe.

She wants to prove that a 51-year-old union lawyer and mother of two can help end the longest-serving government in Canadian history.

Of course, political conditions for such a transformation have to be just right, and at a time of depressed oil prices, PC Leader Jim Prentice is running on an unpopular plan to slay the province's record $5-billion deficit. Mid-way through the campaign, polls show the NDP is in a sustained three-way horse race with the Tories and the opposition Wildrose party. On the campaign trail, Mr. Prentice has been backtracking on painful budget cuts that he said were necessary only weeks ago, hoping angry Albertans will swing back to the tried-and-true Tories.

Before the province was plunged into a snap election campaign, Ms. Notley had slowly built a reputation as Mr. Prentice's main critic. Aided by the absence of any other permanent opposition leader, she was typically first to find a podium and respond to the Tory Premier. Her approval rating, the highest of Alberta's provincial leaders, has climbed steadily since she took over as NDP Leader last October.

Now, some of that magic seems to have rubbed off onto her party. NDP candidates are reporting record numbers of volunteers and standing-room-only crowds at campaign events ahead of the May 5 vote.

"The seasoned campaigners and volunteers are seeing something real out there, that isn't just blowing smoke, it's something and I've seen it myself," Ms. Notley says. "Every now and then I have to stop and check if I have a cabinet in mind, you know, just to make sure."

It's lunchtime on the seventh full day of the campaign when Ms. Notley enters the Route 99 Diner near the edge of her downtown Edmonton riding. A booth of elderly patrons by the door beckons her over. After a quick chat, she strides to an empty booth and settles in. While some diners glance over at the NDP Leader and talk of politics flares up in the eatery, Ms. Notley is focused on her souvlaki.

If people at the diner want to speak with her, she'll entertain them in conversation; otherwise, she lets them eat. Is she shy?

"I suppose I don't go out there if it isn't an event," she says, surprised by the question. "I guess it depends on the day."

Ms. Notley's staffers say she has an extroverted side, and she displayed a cutting sense of humour during the campaign's sole televised debate on Thursday. The NDP campaign is being waged from an orange-and-white minivan and Ms. Notley's face is emblazoned on both sides of what staffers call the "Rachelmobile." She finds hope on the campaign trail.

"Albertans aren't as right-wing as some people think, at least the majority aren't," she says. "This is a young province and we could be the people who stop the PCs."

Ms. Notley is counting on the support of people like Erin Garvin, who will be casting a ballot for the New Democrats for the first time after he spoke with the party's leader. "I just can't believe that the party I've voted for my entire life is so incompetent," says Mr. Garvin, who has voted PC in the past. "For decades, there was only one answer to the question of which party could form government and that was the PCs. When I spoke with Rachel, she said she could do it and I trust her."

While the NDP has a clutch of seats in Edmonton, the party says polling has been positive in parts of Lethbridge and Calgary. Over a dozen seats could be painted orange on May 5, joining the four New Democrats currently in Alberta's legislative assembly.

Squaring off against a technocrat in Mr. Prentice, Ms. Notley has been called an "extremist" by the PC Leader. Her campaign has also had some embarrassing stumbles. Only hours after her fiscal plan was released, she had to admit that an NDP government would need an additional year to balance the budget – the party's calculations had been off by billions. Mr. Prentice capitalized on the party's troubles by telling her that "math is difficult" – a remark many viewed as sexist. Ms. Notley has also admitted that despite a pledge to phase out Alberta's coal-fired power plants, the NDP doesn't have a detailed plan yet on how to achieve that goal.

The Rachelmobile's odometer is turning at a furious pace when Ms. Notley is joined for the day by The Globe and Mail. The leader's schedule is crammed with events: Before heading to the diner, she has already unveiled the NDP plan to fund 2,000 new long-term care beds and held events in three ridings. When photos were taken, the instruction wasn't "say cheese," but one word: government.

For all the optimism, the NDP is well aware that polls can be fickle – and flat wrong. During the 2012 campaign, no polls showed the PCs returning to power; Wildrose's Danielle Smith was expected to be Premier. But in the last 72 hours, PC leader Alison Redford rallied and returned to Edmonton with a strong majority government.

Ms. Notley's father, Grant Notley, led the provincial NDP from 1969 to 1984 and is credited with building the party into a modern institution. He was killed in a plane crash shortly before the party won 16 seats in 1986 and formed official opposition – the win remains the NDP's high-water mark in the province.

While she may be looking to surpass her father's achievement, Ms. Notley gives no impression that is what's driving her. Her motivation to unseat Mr. Prentice seems to boil down to one wish: "I yell at the radio a lot and I'd like to do less of that. I'd like to see us do good things. I'd like to help people, make lives better, move on the environment and make things better for kids."

Since the early 1990s, the party has been in the political wilderness, with few – if any – seats. The rebuilding was slow and tedious, requiring the reorganization of the party and better recruiting. "Really boring stuff," Ms. Notley says.

The results are clear in some Edmonton neighbourhoods. David Eggen helped pound 1,700 signs into lawns in his riding during the first week of the campaign and has 1,000 more on order. The NDP House Leader's previous record was 1,339 by the last day of the campaign. Unlike other Canadian jurisdictions where political signs are stuck on power poles and street lights by the thousands, Albertans try to place most signs on lawns – one sign should equate to one supporter. "I remember when you could win with 500 signs," Ms. Notley says. "We need to paint this town exceptionally orange."

If the NDP were to win government, Ms. Notley has pledged to introduce a progressive income tax and hike corporate taxes. The party would also pour more money into health and education in Alberta. "We've got to stop this thing we're doing in Alberta where the equality gap is just growing and growing," she says.

But her first step would be to table legislation to strike a resource commission and audit whether the province is getting good value for its natural endowment. The promise has struck a chord with Albertans.

"We've been profoundly inept at sharing the windfall of a completely unique level of resources," Ms. Notley says. "I'm afraid that 50 years from now, our great-grandchildren will look at what we did with our resources and they'll rip up our pictures because they'll be so angry at how we squandered them. Almost no other jurisdiction in the world has done so little with so much." 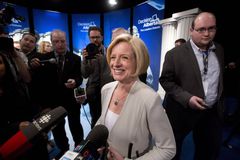 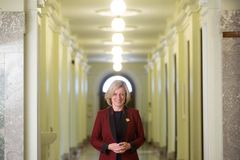 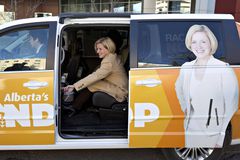