Alberta's threat to throttle back its energy exports as part of its fight to get an oil pipeline to the West Coast could create difficulties for the industry and prompt judicial challenges, say energy executives and legal experts.

The provincial government on Thursday said it is prepared to pass legislation that would enable it to effectively drive up the cost of products such as crude oil and jet fuel, but did not detail how it would do so or what would trigger such dramatic steps. Premier Rachel Notley's government concedes that the regulations that allowed former Alberta premier Peter Lougheed to curtail production and therefore increase prices in Eastern Canada in 1981 no longer exist.

The government is trying to stop British Columbia from blocking or further delaying the Trans Mountain pipeline's expansion effort. But the energy industry's concern, coupled with legal limitations, underscore how Alberta's tough talk could prove unwelcome and ineffective. The proposal, contained in Thursday's Throne Speech, also marks a sharp shift in the government's strategy: Ms. Notley, roughly one month ago, dismissed such steps, arguing they would harm Albertans more than folks in British Columbia. Further, the suggestion surprised the energy industry's lobby group, which often has a hand in shaping major oil and gas policy in the province.

"Alberta actually could make noise about blocking shipments or restricting shipments – and they could do that – and then there would be legal challenges and ultimately they would lose," said Al Lucas, a professor in the University of Calgary's law school, specializing in energy and environmental regulations.

He said the federal government has jurisdiction over intraprovincial trade and commerce and Alberta could not choke energy shipments to places like the Lower Mainland.

"Politicians can make any kind of statement they want," Prof. Lucas said.

Even Kinder Morgan Canada, the company behind the $7.4-billion Trans Mountain expansion project, last month noted that Alberta could not curtail shipments of energy products on its existing pipeline to the West Coast.

"It's not feasible," Ian Anderson, the company's president, said in an interview then. The energy companies are "the ones who determine what moves and in what volume, and we're just the transporter. But … it would be really commercially infeasible to do that."

An official on Friday said the government is not prepared to speak about the specifics of what it is exploring.

Ms. Notley's government is modelling its new position on events that played out nearly four decades ago, when Mr. Lougheed went head to head with Ottawa over its implementation of the National Energy Program in late 1980. Days after the federal Liberal government of Pierre Trudeau introduced the NEP – which Alberta viewed as an unfair grab of the province's energy resources – the then-Alberta premier announced that over the course of nine months, he would in three stages reduce the province's oil output to 85 per cent of its regular capacity.

A Globe and Mail report from the day said Mr. Lougheed accomplished this through a resolution in the legislature instructing the cabinet that it was "in the public interest" to make regulations under the Mines and Minerals Act limiting the amount of petroleum that would be produced in Alberta.

In effect, the move meant refineries had to replace some $17-a-barrel Alberta oil with pricey imported crude at near $40 a barrel – a move that hit Canadian gasoline consumers in 1981 particularly hard. (Ms. Notley's father, Grant, was leader of the Alberta NDP, in opposition, and disagreed with the move. Mr. Notley predicted that Mr. Lougheed's announcement would call down the wrath of other Canadians on the heads of Albertans. "Albertans will be picketed everywhere they go," he said.)

David Mitchell, a historian of B.C. politics and a former MLA representing West Vancouver, said the political and economic conditions prevailing when Alberta introduced that legislation are much different than the present-day conflict. Back then, B.C. was "more of an innocent bystander" as Alberta went to war with Ottawa, and Canada's westernmost province did not add to the tension, he said.

"Most of the focus was on the East, don't forget [Alberta's] famous slogan, 'Let the Eastern bastards freeze in the dark,' " Mr. Mitchell said Friday.

Mr. Lougheed's political gamble to "turn down the taps" – combined with federal concern over the number of oil rigs and investment exiting the country – led to the deal hammered out by Mr. Trudeau and the Alberta premier in September, 1981. The current Alberta premier wants Prime Minister Justin Trudeau to take more authoritative action to push the pipeline project through.

The B.C. government in late January said it would not allow an increase in bitumen shipments to the province until it further studied what would happen in the case of a spill in the ocean.

Ms. Notley accused her NDP counterpart in B.C. of effectively blocking the pipeline expansion project's progress. She responded by banning imports of B.C. wine – a step she reversed when B.C. said it would ask the courts whether it had jurisdictional powers. Alberta's Throne Speech, however, ended this thaw.

B.C. Environment Minister George Heyman on Thursday told reporters that the rhetoric in Throne Speeches is often "targeted at a specific audience" and B.C. expects that Alberta still has an interest in maintaining a good relationship.

Mr. Heyman noted that the province is still working with constitutional experts to craft a legal question so a judge can decide whether it has the right to curtail diluted bitumen shipments in order to protect its waters. He provided no timeline for when this reference case could be brought to court.

Opinion
Notley’s brinkmanship with B.C. over pipeline could benefit from some Lougheed magic dust
March 9, 2018 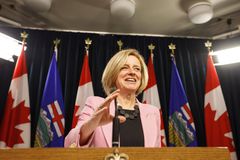 Follow Carrie Tait, Kelly Cryderman and Mike Hager on Twitter @CarrieTait @KellyCryderman @MikePHager
Report an error Editorial code of conduct
Due to technical reasons, we have temporarily removed commenting from our articles. We hope to have this fixed soon. Thank you for your patience. If you are looking to give feedback on our new site, please send it along to feedback@globeandmail.com. If you want to write a letter to the editor, please forward to letters@globeandmail.com.
Comments are closed