The Alberta government expects to more than double its debt over the next three years and run deficits for six years, all while counting on rising oil prices and unbuilt pipelines to rescue the province's finances.

The reliance of Premier Rachel Notley's NDP government on the energy market to improve its books runs against its promise to wean the province off revenue from oil, gas and bitumen royalties. The government's budget for 2017-18, tabled on Thursday, shows little in the way of diversifying the province's revenue sources and shuns dramatic spending cuts.

Alberta plans to run a $10.34-billion deficit in the upcoming fiscal year and expects to balance the budget by 2023-24. The province says stronger energy prices, particularly for bitumen derived from the oil sands, will be key to recovery. And for that to happen, Alberta is banking on two pipeline projects – Kinder Morgan Corp.'s controversial Trans Mountain expansion project to the West Coast and Enbridge Inc.'s Line 3 replacement to Wisconsin – to be operating by 2021 and 2020, respectively.

Related: Alberta's budget: Here's what you need to know

That financial road map is risky because pipelines are increasingly difficult to build because of opposition ranging from landowners to Indigenous groups, to environmentalists and governments in other jurisdictions. The NDP and the province's opposition parties favour pipelines, but even projects approved by governments now face years of struggle.

Another major risk is the provincial election this spring in B.C., where the opposition NDP rejects the Trans Mountain expansion.

Alberta Finance Minister Joe Ceci argues that Trans Mountain and Line 3 can be completed without delays.

Pressed further on whether he believes the projects will, indeed, be constructed on schedule, Mr. Ceci said: "I believe they will be completed on time."

Brian Jean, the leader of the Official Opposition, is skeptical about the NDP's faith in the Trans Mountain timeline.

"The situation is not looking optimistic with the government possibilities in British Columbia," the leader of the Wildrose Party told reporters Thursday. Further, Mr. Jean argued that Alberta's NDP "hired a lot of people who are anti-oil sands and anti-oil in the past … and I don't think that's the way to send the right signals to the market that you're in favour of increased production."

Alberta Energy calculates energy companies will receive between $2 and $7 more a barrel of oil should Enbridge and Kinder Morgan complete their respective projects.

The Trans Mountain expansion faces opposition from First Nations and municipalities in B.C.'s Lower Mainland, while Line 3 has encountered push-back in Minnesota.

Both projects are expansions to existing routes, but it's nevertheless difficult to predict whether they will proceed on schedule given legal challenges and other obstacles, said AltaCorp Capital analyst Dirk Lever.

"We're in new territory," he said Thursday. "It's achievable if they don't hit roadblocks."

Revenue and spending details in the budget documents extend only until 2019-20.

Meanwhile, the province's debt will hit $71.12-billion (Canadian) in fiscal 2019-20, according to Thursday's budget. This includes capital projects including building schools and health-care facilities, as well as funding operating expenses such as salaries for teachers and nurses.

Mr. Ceci said the NDP will not sacrifice services, such as hospitals and schools, to balance the books more quickly.

Alberta believes revenue in the upcoming fiscal year will total $45.01-billion, up $2.08-billion from its expected haul of $42.93-billion this year. Cash derived from non-renewable resources make up the majority of fatter revenue figure.

Tax revenue is also expected to climb should the energy market rally. The government, in its budget documents, said revenue will hit $51.8-billion by 2019-20 "driven mainly by increases" in bitumen royalties and tax revenue.

Enbridge expects its Line 3 replacement project to be complete by 2019, a year earlier than the province's prediction. Kinder Morgan, meanwhile, intends to complete its expansion project by 2020, again a year ahead of Alberta's expectations.

If Notley’s big budget gamble goes wrong, things could get ugly in Alberta
March 16, 2017
Alberta’s budget: Here’s what you need to know
March 16, 2017 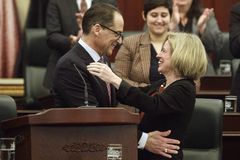 Alberta forecasts greenhouse gas emissions will peak in early 2020s
March 16, 2017
Follow Carrie Tait on Twitter @CarrieTait
Report an error Editorial code of conduct
Due to technical reasons, we have temporarily removed commenting from our articles. We hope to have this fixed soon. Thank you for your patience. If you are looking to give feedback on our new site, please send it along to feedback@globeandmail.com. If you want to write a letter to the editor, please forward to letters@globeandmail.com.
Comments