Albertans are expecting an election call within weeks, if not days, to pass judgment on the largest tax increase in a generation and the direction Jim Prentice is taking their province.

The Premier pledged to stick with his government's austerity agenda on Friday morning, while appearing at a daycare. Only hours earlier, Finance Minister Robin Campbell tabled a budget that will post a record $5-billion deficit over the coming year and raise personal income taxes for the first time since 1987.

"All Albertans will be touched by this budget," Mr. Prentice said. "But we are asking people who can pay a little more in these challenging years to do that and help us get through it."

Facing a rapid drop in revenue due to a collapse in global oil prices, Mr. Prentice warned for months that he was preparing a budget that would transform how the Alberta government pays for services.

Gone is the province's 10-per-cent flat income tax, replaced with a tax that introduces higher rates for those making over $100,000 a year. About 60 higher taxes and fees, as well as a new health tax, are expected to raise $1.5-billion over the coming year.

Sworn in as premier last September after winning a Progressive Conservative leadership battle, Mr. Prentice has said he will need a fresh mandate from voters to implement his far-reaching budget. After 43 years in office, the Tories hold 70 of the Alberta legislature's 87 seats.

While some legislators and pundits had expected an election call in late March, most are now preparing for an election in mid-April. NDP Leader Rachel Notley has set her sights on an April 13 start for the next campaign.

However, election plans are still being drawn up with loose timelines.

After the defection of 11 members of the Wildrose Party and plans for nearly half the provincial Liberals to run for the federal party, the NDP will be the only opposition party to field all its incumbent MLAs.

Ms. Notley's party is expecting to gain a number of seats in the coming election after years of being stuck in the political wilderness.

The Liberals will not have a permanent leader in a campaign this spring. A new Wildrose leader will be selected Saturday evening.

There could be only days for all sides to prepare for a vote. Starting on March 30, legislators will be taking a two-week break to work in their constituencies. Tory MLAs will be going door-to-door selling the budget and speaking with local voters.

There are legal challenges to an early campaign. Alberta's fixed election law stipulates that the next election should be held between March 1 and May 31, 2016. However, the law gives final say to the province's lieutenant-governor.

An Edmonton lawyer is trying to block a snap election in court. However, Mr. Prentice said Friday he is confident he can call an election.

The Premier has warned the province's three opposition parties to be ready for an election at any time and has said he won't feel responsible if they aren't prepared.

Brian Jean, a contender for the leadership of the Wildrose dismisses the budget as a pre-election ploy by Mr. Prentice. Two days before the budget was tabled, Mr. Prentice appeared in a taxpayer-funded televised address to speak about the province's fiscal woes that the opposition has compared to a campaign ad.

"This budget was about electoral politics and not about solving Alberta's fiscal problems," wrote Mr. Jean in a statement. "More taxes and no real cuts mean that our deficit will be the highest ever."

Whenever an election is called, the government has made it clear that Mr. Prentice's personal credibility will be at the centre of the Tory campaign. A former senior MP under Prime Minister Stephen Harper and banking executive, Mr. Prentice's short time in office has seen a swing in public support back to the Tory party.

"It's very rare that you introduce a budget and go to the polls with a promise of higher taxes," said Duane Bratt, the chair of policy studies at Calgary's Mount Royal University. "But Jim Prentice could win an election with this budget, without a budget or with any other budget."

Despite anger from the opposition over new taxes in Thursday's budget, the one tax that has seemed to attract the most public attention wasn't one that increased.

The Premier's decision to not increase corporate taxes was raised during a stop in Red Deer on Friday afternoon.

Where Mr. Prentice said that the pain would be shared across the province, many wondered why his government chose not to increase the province's 10-per-cent tax on corporate profits – the lowest corporate tax in Canada.

"We need to hang on to every job in this province," Mr. Prentice said. "We don't think that a tax that would destroy jobs is what we should be doing as a province right now."

In consultations the government held with more than 40,000 Albertans before the budget, 69 per cent favoured increasing corporate taxes. 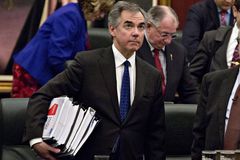 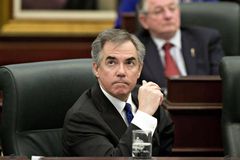 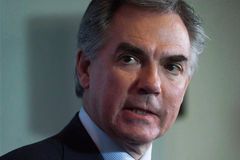