The wild west of ride-hailing apps operating without clear rules and suitable insurance is over in Alberta as the province has become the first in Canada to unveil an insurance system that covers all drivers working for ride-share companies, including Uber.

It took the Alberta government nearly four months to write insurance rules that would allow drivers to purchase coverage for when they transport fares for ride-hailing companies. The new insurance system will take effect on July 1.

"I think that this is providing a very good approach to ensure the safety of the public and to ensure a level playing field with other car-for-hire types of businesses," Transportation Minister Brian Mason said on Tuesday.

With drivers often working part-time and in a piecemeal fashion, ride-sharing services are testing the insurance industry to develop new policies that straddle the grey zone between personal and commercial use of vehicles.

Tuesday's announcement allows for hybrid rules that cover drivers from the moment they turn on their apps until they drop off passengers, said Heather Mack, director of government relations in Alberta for the Insurance Bureau of Canada.

"The sharing economy is throwing government and insurers for a loop," said Ms. Mack. "But there is such a consumer demand here that insurers see this as a new market where they need to deliver. You'll see a lot of competition and new products."

At least two insurance companies have already announced that they will provide plans.

Alberta has been a Canadian leader in developing rules to allow for ride-hailing apps. Despite widespread protests by taxi operators, in March the provincial capital of Edmonton became the first Canadian city to pass a bylaw allowing ride-share companies to operate.

The insurance rules unveiled on Tuesday were the final piece of regulation needed by the provincial government to cover the growing industry. Amendments were made in May to Alberta's traffic safety act allowing the companies to operate, including requiring companies to ensure drivers have professional licences and undergo deep police background checks.

Ride-sharing companies could face fines of up to $50,000 per offence daily for violating the rules.

What remains unclear is whether ride-hailing behemoth Uber will be able to work with the new rules.

Uber suspended its operations in Edmonton in March after the city passed regulations requiring adequate insurance. The ride-hailing service has been polarizing and has faced difficulty securing legitimacy in markets. In Quebec, a new law requires the company to acquire expensive taxi licenses. After Calgary unveiled new regulations deemed too stringent by Uber, the company pulled out of Alberta's largest city.

A spokesman for the company said it was looking at the new rules. "We recognize the steps taken by the Alberta government and we will be reviewing the newly approved ride-sharing insurance policy and other announced rules. We'll have more to share soon," said Jean-Christophe de Le Rue in a statement.

An official with TappCar, an Alberta-based ride-hailing company similar to Uber, says the company is happy with the new rules. Operating since March with expensive commercial insurance, the company says more flexible insurance plans could allow it to expand to more part-time drivers.

"We're very pleased with the regulations that have come out today, because it clearly shows the government is serious about protecting Albertans," said Pascal Ryffel, a spokesperson with TappCar. 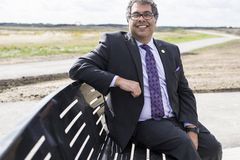 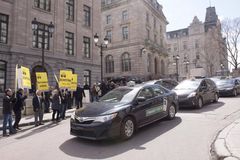 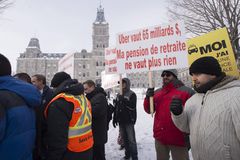