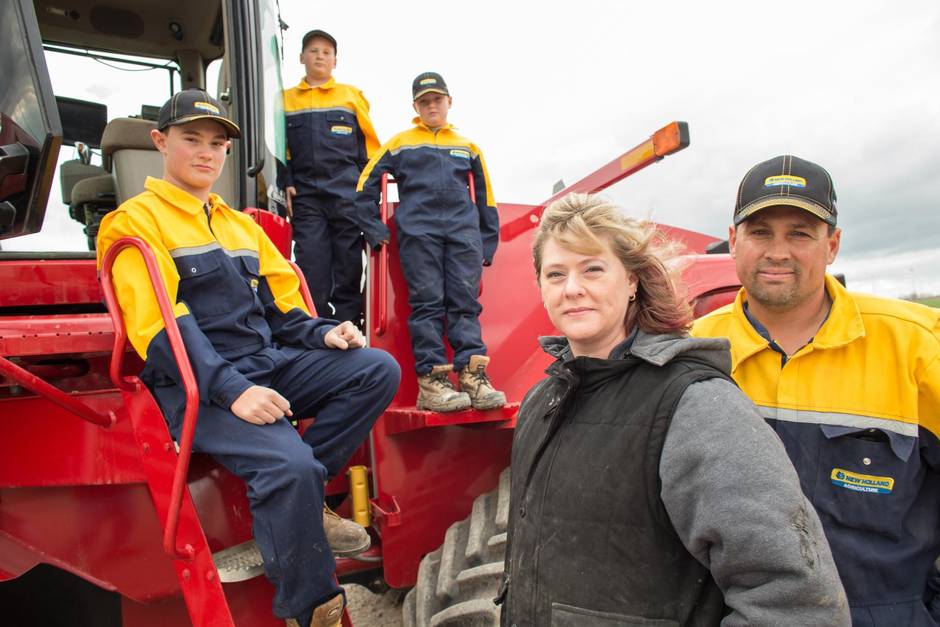 Ian and Michelle Pearce at their farm near Wheatley, Ont., with their three sons, from left to right: Connor, 13; Owen, 9; and Ethan, 11. (Geoff Robins/The Globe and Mail)


Keeping safe on the farm


Though incidents are few and far between, farm kids are more likely to be killed or hurt compared with their urban counterparts, writes Carrie Tait


Connor Pearce is 13. He is a farm kid, and drives a big New Holland tractor when spreading pig manure on his family’s fields. The Pearces call the tractor Big Foot, and when Connor is in the cab, he goes slow, maybe 10 kilometres an hour. He is allowed to load and spread manure only when he is within an adult’s eyesight.

Connor’s two younger brothers, Ethan and Owen, work on the farm, too, although they are not allowed to drive Big Foot on their own yet. The Pearce boys are careful and know the house rules. They know one little slip can kill someone.

One little slip killed their sister Lyla Dawn in June, 2013. She was four-and-a-half, climbed onto a hay wagon when her grandpa was not looking, and fell under a wheel when the tractor pulling the wagon jerked a bit. Lyla had dimples, a flurry of freckles just below her blue eyes, and dirty blond hair with bangs. Her ears were pierced and her favourite job was to help feed the pigs, Michelle Pearce, the kids’ mom, said this week.

“She had a stuffed kitty cat that she took everywhere, that she slept with every night,” Ms. Pearce said.

Lyla finished a farm safety course in kindergarten shortly before the accident on the family farm near Leamington, Ont., and her mom believes governments should put more money into education programs like those.

But Ms. Pearce does not believe legislation should impose rules such as a minimum age to operate machinery. As farm deaths across Canada drop for adults, they have remained flat for children, and governments everywhere have been reluctant to legislate tighter rules for kids working on farms.

That includes Alberta, where the governing NDP is revamping farm safety legislation, but remains vague about what, if anything, it will do when it comes to children. The government on Tuesday announced a handful of consultation meetings, but any changes that would tell farm families what to do with their offspring will meet resistance.

The consultations come one month after three young girls – Catie Bott, who was 13, and her 11-year-old twin sisters, Jana and Dara – were killed in a farm incident in Withrow, Alta. They fell into a grain truck and were buried in canola. The RCMP deemed it an accident and the investigation is closed.

Ms. Pearce gets nervous since Lyla’s accident as her sons take on increasingly dangerous jobs on the farm, but she allows it. Farmers, ranchers and politicians across North America applaud – or at the very least, respect – the Pearces’ approach.

“They want to be farmers and that’s part of the life,” she said. “So, I need to teach them to be safe.”

Alberta’s Office of the Chief Medical Examiner counts 11 farm deaths so far in 2015, with four of them children. One person under 18 died in a farm-related incident in the province in 2014, according to the OCME’s preliminary statistics, updated on Nov. 18, on deaths it investigates. Sixteen adults were killed in farm incidents last year, the OCME said.

Farm kids are far more likely to be killed or hurt compared with their urban counterparts. In Alberta, for example, farm children under 18 were 83 per cent more likely to suffer severe injury or death than city kids between 1999 and 2010, according to a comprehensive doctoral thesis by Kyungsu Kim at the University of Alberta’s School of Public Health. Children living in rural areas, excluding First Nations, were 73 per cent more likely to be severely injured or die than city kids, while the risk for First Nations children living in rural areas was nearly three times higher.

Lori Sigurdson, Alberta’s Minister of Jobs, Skills, Training and Labour, said the government is concerned about the disparity between farm kids and city children, but has not fleshed out how it will address the problem.

Family farms, she said, are “an essential part of our culture here in Alberta,” but employees and families must be kept safe. The government must be sure it is “respecting family farms … but also making sure that there is safety and fairness. So it is very much a balancing act.” 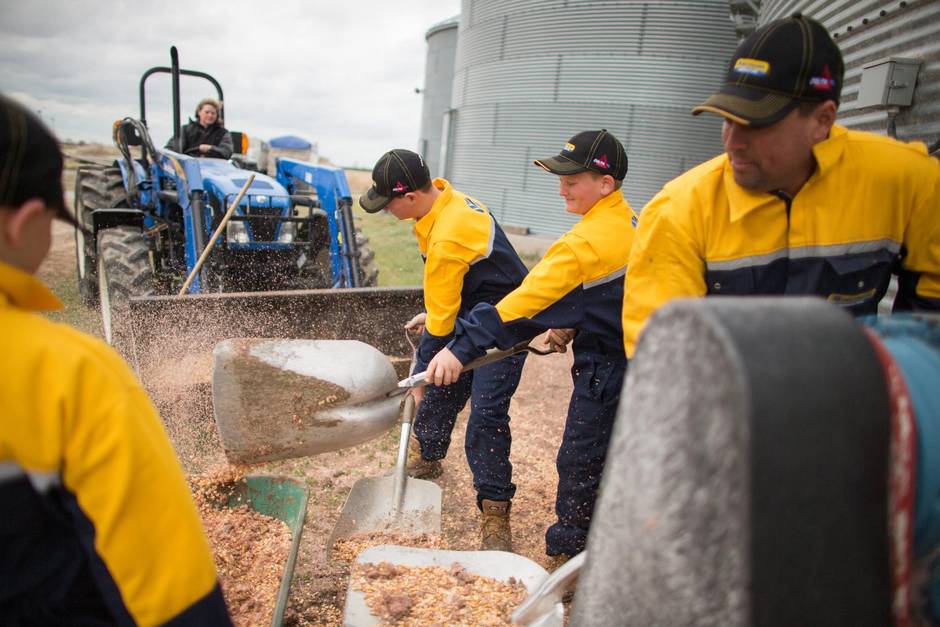 Ian and Michelle Pearce and their sons. (Geoff Robins/The Globe and Mail)

Farming is mythologized as a lifestyle full of tradition, and governments are not supposed to legislate culture. Officials are loathe to impose rules, such as a minimum age to drive a combine or operate an auger, leaving those decisions up to parents and those who own farms and ranches employing young people.

As a result, the laws governing farm safety are inconsistent and weak, especially when it comes to children and youth.

In Alberta, for example, a license is not needed to drive farm implements on highways so long as the driver is at least 14 years old. Anyone of any age, however, can drive heavy farm machinery in fields. In turn, although farms and ranches are industrial work sites, they are largely exempt from legislation designed to protect children (and adults) from industrial dangers. This philosophy remains even as the rate of agricultural fatalities for children under 15 in Canada has stayed flat for 25 years, despite improved safety features on machinery.

“Who exactly is responsible? It seems to be that nobody is held accountable when a child dies on a farm,” said Don Voaklander, the director of the Injury Prevention Centre at the University of Alberta.

The organization counted 2,317 agricultural fatalities in Canada between 1992 and 2012, and 272 of those were children under the age of 15. Another 102 people between 15 and 19 were killed in agricultural incidents in the same time frame.

Governments in Canada and the United States, however, remain hesitant to roll out stronger safety laws for youth.

“It always comes up when there’s a horrible tragedy. And part of you says: ‘Those poor people and what they are dealing with,’” said William Pickett, a professor in the department of Public Health Sciences at Queen’s University in Kingston, Ont., and an expert on farm injuries and fatalities. “Then part of you says: ‘What happened there, and why was what happened acceptable? Was it predictable?’

“You have such mixed feelings. And I’m sure the safety authorities – the ministries of labour [or the] equivalent – have the same feeling about it. So then you get this paralysis.”

Ms. Pearce, the Ontario mother who lost her daughter, firmly believes legislation has no place in the matter, save for increased education programs.

“It should be more up to parents’ judgment on whether their kids are responsible enough for it. Some kids aren’t going to be responsible [enough] for it at 13, but I know my son and he is very responsible with it, so that’s our judgment to make,” she said. “I don’t know how much we can have the government step into family lives.”

“Who exactly is responsible? It seems to be that nobody is held accountable when a child dies on a farm.”
Don Voaklander, director of the Injury Prevention Centre at the University of Alberta

Jason Nixon is the member of the legislature for Alberta’s Rimbey-Rocky Mountain House-Sundre constituency, where the Bott family lives. The Wildrose Party MLA argues legislation is not the answer: “I really think education would have a more significant result in this area than a piece of paper.”

Many experts do not believe governments can legislate the problem away. Lawmakers will have the political will to make changes only when farmers and ranchers themselves raise a fuss.

The U.S. Department of Labor proposed rules that would have banned people under 16 from doing dangerous farm work. Lobbyists, farmers and ranchers in 2012 forced the government to squash the idea.

“The Obama administration is firmly committed to promoting family farmers and respecting the rural way of life, especially the role that parents and other family members play in passing those traditions down through the generations,” the Department of Labor said in a 2012 statement explaining why it nixed its safety plan.

“The Obama administration is also deeply committed to listening and responding to what Americans across the country have to say about proposed rules and regulations.”

Louise Hagel, a professional research associate at the Canadian Centre for Health and Safety in Agriculture in the College of Medicine at the University of Saskatchewan, does not believe regulations would be effective. She said this is in part because enforcement would be difficult given that tens of thousands of farms span millions of acres in Canada.

Instead, policy makers ought to consider marketing campaigns promoting safety, and hope the farming culture shifts.

But at the same time, Ms. Hagel said governments are comfortable enforcing rules around young people working – laws often tied to safety concerns – but allowing exemptions for farms and ranches. The legislative logic, she said, does not make sense.

Back in Leamington, Ms. Pearce cannot keep her three boys in a bubble, depriving them of a world unique to rural families.