The partnership that owns the Calgary Flames proposed a deal for a new arena that would give the private company a chance to transform into the real estate developer for a potentially lucrative new community, according to documents obtained by The Globe and Mail.

Calgary Sports and Entertainment Corp. (CSEC), which owns the Flames and other sports teams, made its first arena offer to the city in a letter and two-page list of terms Feb. 21. The documents provide a glimpse of the club's vision for a complex more extensive than just an arena.

As part of the proposal, the Flames' owners insisted on receiving an option to buy and develop land near the events complex, a slice of the Stampede Casino's revenue, all parking revenue from major events it would manage at the events complex and other goodies. The demands included the city of Calgary covering the cost of flood insurance, reimbursing the club for all provincial property taxes that may be imposed on the facilities, and requiring local ratepayers to pick up the bill for a public gathering place suitable for festivals next to the arena.

The documents underscore how the multimillion-dollar arena negotiations are – for both camps – about far more than a concrete structure in Victoria Park, an underdeveloped zone east of Calgary's downtown.

If Calgary acquiesced to the terms, for example, it would give some of Canada's wealthiest men business opportunities in part thanks to financial support from taxpayers. Further, some of the sticking points would affect the Calgary Stampede's balance sheet. The Stampede, which hosts the city's famous 10-day festival and other events, is a not-for-profit organization and parking and gambling revenue are important to its operation.

"Our proposals in the enclosed term sheet outline the minimum requirements for a robust competitive sports environment and the infrastructure needed to compete on the world stage from an entertainment perspective," Ken King, president of CSEC, said in the letter.

Any deal that is "not consistent" with the Flames' demands would be "a disappointment and would create an untenable environment," Mr. King wrote. The city rejected the deal.

The Flames and city bureaucrats continued negotiations after the February offer. Naheed Nenshi, who is campaigning for his third term as mayor, in a news conference last month said the Flames' subsequent pitch was "not particularly different" than the first.

Mr. King, in an interview on Friday, disagreed.

"The process evolved and we ended up in quite a bit different place than where we started," he said, declining to say what changed because negotiations are over. "It is quite academic what, if any, the difference was."

In September, Mr. King publicly declared the discussions "spectacularly unproductive" and said the owners walked away from negotiations.

In the February offer, CSEC demanded an "option to acquire adjacent lands for the purpose of constructing residential or commercial structures including high-density housing, hotels, restaurants, etc.," the term sheet said. The group also said it needs to "approve" Calgary's master plan to revitalize Victoria Park to "ensure it will be an appropriate environment" for the arena complex.

There is a growing trend toward professional sports teams building hotels and bars, condos and apartments near their stadiums or arenas. Jeff Vinik, owner of the NHL's Tampa Bay Lightning, has begun the first phase of a $3-billion (U.S.) downtown and waterfront development project backed by Bill Gates' Cascade Investment. Included in the long-term plans are a medical school, condos, a hotel, shops, restaurants and office towers, much of it close to Amalie Arena.

The Detroit Red Wings also have a development component in the team's new arena project. Ilitch Holdings, which owns the Red Wings, is behind the rebuilding of 50 blocks of midtown Detroit near its just opened $863-million Little Caesars Arena.

As for Edmonton, Oilers' owner Daryl Katz has said he would not have bought the team "without the challenge and opportunity to build the arena and everything around it." Rogers Place cost $480-million (Canadian) as part of a $6-billion downtown renewal venture. Knowing a hotel, a 66-storey office tower and various shops and restaurants were part of the deal, city council committed $313-million to the arena, with $231-million coming from a community revitalization levy and increased parking revenue.

Mr. King, at a news conference last month, said CSEC has partnered with a developer and someone is interested in building an office tower, although he did not provide more detail.

The hockey club has argued the arena would attract development and therefore benefit the city because it could then collect property taxes. Murray Edwards, one of the Flames' most powerful owners, is familiar with the property game. He owns three ski resorts in British Columbia – mountains dotted with accommodations and development.

The Flames' owners, according to the term sheet, envision a 19,000-seat event centre and adjoining 5,000-seat practice facility, including sufficient parking. Under the Flames terms, the complex would include a "public gathering place adjacent to the facilities for public participation in festivals, celebrations and outdoor/indoor events" built at the city's expense.

"It has become increasingly clear through our process that the viability of an NHL presence in Calgary is severely impaired," Mr. King said in the February letter to the city's deputy manager.

"Taking into account that we, like Edmonton, Winnipeg, and others, operate in small and therefore marginal markets, it is imperative that facilities keep pace with others in North America." The Flames' owners also wanted the city to waive public transit fees for people who held a valid ticket to "any event" at the arena and practice centre, according to the document. Calgary would also provide police services "commensurate with" other facilities in North America.

In the interview, Mr. King said it was "inappropriate" for someone to leak the document. "Somebody was playing fast and loose with their ethics and I think that's a damn shame," he said.

Calgarians vote in a municipal election Oct. 16. CSEC calculated it would cost $500-million to build the arena and practice facility. It asked the city to cover $250-million while the Flames organization would contribute $100-million in cash. Another $150-million would come from a user fee spanning 35 years and financed by the city, according to the Flames' offer. The Flames, in another presentation it released publicly, described its share and the user fee as "similar to prepayment of rent for 35 years of tenancy." This offer leaves $50-million unaccounted for. The city contends it excludes the price of land and the money necessary to maintain and then demolish the Scotiabank Saddledome.

The city believes it will cost $555-million to build the main facilities. It demanded the Flames pay $185-million in cash and finance a $185-million ticket tax stretching 35 years in exchange for Calgary chipping in the equivalent of $185-million, which includes the cost of land expenses associated with the Saddledome. 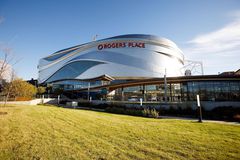 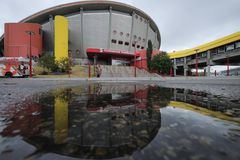 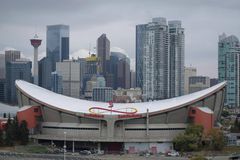 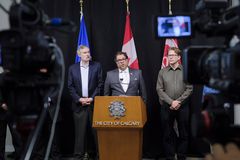