The painful death of a diabetic boy who was so emaciated he appeared mummified could have been avoided if his parents had not isolated and neglected him for years, a judge said Friday in finding the couple guilty of first-degree murder.

The boy, who was one of the Raditas' eight children, weighed less than 37 pounds when he died in 2013 of complications due to untreated diabetes and starvation.

"Mr. and Mrs. Radita intended to and did isolate Alex from anyone who could intervene or monitor his insulin treatment aside from themselves," said Horner.

"Alex died as a result of bacterial sepsis brought on by extreme starvation. His physical condition at death was not a sudden or quick occurrence but rather took place over months and possibly, probably years."

Horner said by isolating Alex he was unlawfully confined and totally reliant on his parents. She said it was also clear that the Raditas knew what they were doing in denying him a sufficient amount of insulin and the long-term consequences.

"The evidence underscores that the Raditas were well aware how ill Alex was and still refused to treat his medical condition with proper insulin protocol and medical care," she said.

"They knew he was dying."

Neither parent showed any emotion or had a comment during sentencing.

Justice Horner sentenced them to life in prison with no chance of parole for 25 years.

"Your actions in starving your son Alex to death are beyond comprehension. You persisted in arrogant confidence...until he was dead."

Witnesses testified that the Raditas refused to accept that their son had diabetes and failed to treat his disease until he was hospitalized near death in British Columbia in 2003.

B.C. social workers apprehended Alexandru after his October 2003 hospital admission and placed him in foster care — where he thrived — for nearly a year before he was returned to his family, who eventually moved to Alberta.

Patricia MacDonald, the B.C. social worker who fought against Alex being returned to his parents, was in court for the verdict.

'I'm happy with the verdict. I think that it really is justice for Alex. He went through a horrible ending to his life and I'm glad to see his parents being held accountable," said MacDonald.

She said she wanted to see the Raditas one final time.

"I just feel like they're so empty. They're void of any kind of emotion, any kind of feeling. I've never met parents like them in my life."

Testimony also indicated that after the family moved to Alberta, he was enrolled in an online school program for one year, but never finished. There was no evidence that the boy ever saw a doctor, although he did have an Alberta health insurance number.

The trial heard that the parents' religious beliefs included not going to doctors.

The day the Alexandru died, the family went to church and said that the boy had died, but that God had resurrected him.

"This was a really difficult case for all involved. The facts that Justice Horner found were such that you really did see the magnitude of Alex's suffering, how long it was and how extensive it was," said Crown prosecutor Susan Pepper.

"Certainly the evidence that was presented in court does show that the system and the social safety net in our province and in our country did fail Alex."

Pepper said she hopes that Alex's case eventually leads to changes in how children in care are tracked in the future. 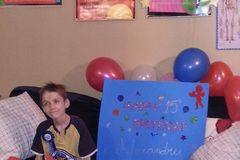 Court told teen with diabetes weighed less than 37 pounds when he died
May 25, 2016
Report an error
Due to technical reasons, we have temporarily removed commenting from our articles. We hope to have this fixed soon. Thank you for your patience. If you are looking to give feedback on our new site, please send it along to feedback@globeandmail.com. If you want to write a letter to the editor, please forward to letters@globeandmail.com.
Comments are closed