The sudden decision by Calgary police chief Rick Hanson to step down – giving about two weeks notice after 40 years in policing – is fuelling speculation he is eyeing a move to politics.

Alberta Premier Jim Prentice is widely expected to call a snap election within the next two months. Since New Year's, parties across the province have been scrambling to install candidates in ridings.

Mr. Hanson, 61, said on Wednesday it was time to step down after eight years as Calgary's top cop. While saying he was unlikely to take another policing job, he did not rule out political ambitions.

The chief then faced questions about whether political parties have courted him. "We'll see in the next couple of weeks. Since the word got out, do I get phone calls? Yes. So, we'll see where that takes me."

With the chief giving no indication that any trouble is behind his quick departure, the timing is suspect, said the chair of policy studies at Calgary's Mount Royal University.

"He resigned suddenly and an election is imminent. People are talking. In Calgary, the only public official with a higher profile is the mayor," said Duane Bratt. "He's left the door open to running, and he'd be a catch. If he ran for the PCs and won, he's a guy you'd put in your cabinet."

During his time as chief, Mr. Hanson led Calgary and its force through several challenging episodes. He was on hand as the city struggled through a catastrophic flood in the summer of 2013 that became Alberta's worst disaster. The chief was central in the recovery effort.

His resignation, effective March 13, came as a surprise to city hall. While the chief said he decided months ago to step down, Mayor Naheed Nenshi found out only late Tuesday evening. Hours later, Mr. Nenshi stood alongside as the only police chief he has known as mayor announced his departure.

"I'm not one for long farewells," Mr. Hanson said. "I don't want to be that lame-duck guy sitting in an office staring out the window."

The head of Calgary's Police Commission praised the chief for shifting the force away from traditional policing toward a community-oriented approach.

"His will be big shoes to fill," Rodney Fong said in a statement.

The straight-talking cop often spoke about the need to "put bad guys in jail." The native Calgarian twice left his hometown for work before being drawn back. Mr. Hanson was lured away from a short stint at the RCMP to lead the city's police force in 2007.

Mr. Hanson joined the Calgary force as a rookie in 1975. The chief's current contract was set to run through to 2018, however, he said the time to go is now.

"Everybody has a shelf life," he said on Wednesday. "There's nothing more pathetic than someone who overstays their welcome."

His departure follows the most difficult year he faced in policing. Five people were stabbed in the early morning hours of April 15, 2014, Calgary's deadliest mass-murder. The suspect's father was a police inspector.

Three months later, police had to announce murder charges against a suspect in the killing of two grandparents and their grandson, although they were unable to find the bodies.

"Your whole career prepares you for years like 2014," Mr. Hanson said. "It was 38 years of experience that allowed me to prepare for the challenges that came in that one year." 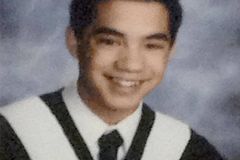 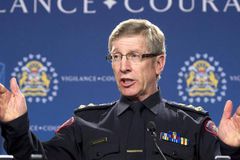 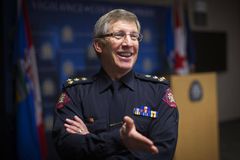