Calgary's police chief is open to introducing supervised facilities for drug users, so long as such programs are part of a larger strategy to lower addiction rates and address problems that accompany drug dependency, such as crime and joblessness.

"It always makes police chiefs look resistant when they say no to these things. My answer has been: 'Sure, as long as it is part of a better strategy,'" Calgary Police Service chief Roger Chaffin said in an interview this week.

"I'd be more mindful of it if it was part of a more robust strategy to lower the issues of addiction."

Alberta is in the midst of a drug crisis that has also hit several other provinces, most notably British Columbia, with opioids such as fentanyl at the centre of the problem.

Supervised drug-consumption sites, such as two already operating in Vancouver, are designed to reduce risks for drug users because health professionals are there to quickly treat overdoses.

The federal government this week proposed legislation that would make it easier for cities to open supervised-consumption facilities, so long as they can prove there is a need, consult the community, show they will reduce crime, demonstrate they have the resources to run the facilities and follow regulations.

Toronto has applied for three small facilities; Montreal, about two years ago, asked permission to build three supervised-injection facilities and a mobile operation; and Vancouver wants to expand its program by adding up to five more supervised facilities.

Chief Chaffin recognizes supervised facilities reduce harm, but that, he said, is not enough to start construction.

"The goal really is not to have the sites. Those sites have to be attached to a strategy to help these people who are suffering addictions," he said.

"If we can get better answers to it, I'd be more than happy to get behind it and say 'Let's do something we're currently not doing.'"

By way of example, Chief Chaffin said the province needs more beds available in addiction-treatment facilities so supervisors at consumption facilities, as well as officers on the street, can connect users with resources to address their underlying problems. Further, all major players – Alberta Health, Alberta Justice, police, social-service providers – must work together to solve the drug crisis, he said.In Vancouver, the city's force is also pushing for more treatment. Vancouver Police Chief Adam Palmer held a news conference with the city's mayor on Friday to announce there had been nine fatal overdoses the night before, compared with an average of about 15 fatalities a month earlier this year.

Chief Palmer, whose department has been largely supportive of the city's two supervised-injection sites, said harm reduction alone is not enough.

"There is a lot of focus right now placed on harm reduction because people's lives are at immediate risk. That is a tactic that we understand and support," he said.

"The fentanyl crisis, however, is bringing a new level of urgency to address the lack of detox and treatment options available to people. We need a longer-term strategy to help people in crisis."

Health Canada has sanctioned just two supervised-consumption sites in the country, both in Vancouver. While the Vancouver sites focus solely on injection drugs, proponents also want such facilities to watch over methods of drug use, such as inhalation.

David Hodgins is a psychology professor specializing in addictions. Safe-consumption sites, he said, can fit with the Calgary police chief's demands.

"We're a little bit slow on embracing ideas like safe-injection sites," the University of Calgary professor said. "It is really focusing on immediately making people safer, and then using that as a stepping stone toward longer-term solutions," such as getting addicts into programs to help them ditch street drugs.

In Alberta, 338 people have died from apparent overdoses tied to fentanyl or other opioids in the first nine months of 2016, according to Alberta Health. The department believes 193 of these deaths were related to fentanyl. This marks a 65-per-cent increase over the 205 fentanyl-related deaths in the same stretch in 2015, Alberta Health calculates. Prescription-grade fentanyl is 100 times more powerful than morphine. A dose equivalent to the weight of two grains of salt can be deadly for an adult.

The picture is even worse in neighbouring British Columbia, where more than 600 people had died by the end of October, 2016. The figure is expected to top 750 by the end of the year.

Fentanyl has hit Calgary harder than any other place in Alberta. The city accounts for 84 of the province's 193 fentanyl-related deaths in the first nine months of the year; Edmonton places second, with 59 deaths, according to the province's statistics.

"Fentanyl and methamphetamine particularly are really behind the decay in the community right now," CPS's Chief Chaffin said.

"If you add the economic downturn on top of that, and some of the hopelessness in the community in this massive amount of drug dependency and addiction, these issues need to be addressed."

The increasing number of deaths related to fentanyl and other drugs in Alberta has put stress on the province's Office of the Chief Medical Examiner. There are seven medical examiners in Alberta and an eighth will start in Calgary next April, filling a vacancy. The surge in drug abuse includes some substances never before seen in the province, making it tricky for medical examiners to identify what drugs are contributing to the overdose crisis.

"It makes it more difficult to routinely screen for a number of drugs, so it's taking more technologists' time, it's taking more instrument time and requiring more sensitive instruments in order to efficiently get that work done," Graham Jones, Alberta's chief toxicologist, said in an interview last week. 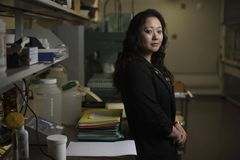 Alberta explores setting up safe sites to reduce fentanyl overdoses
October 27, 2016
Deadly opioid carfentanil linked to 15 deaths in Alberta
December 5, 2016
Follow Carrie Tait and Andrea Woo on Twitter @CarrieTait @andreawoo
Report an error Editorial code of conduct
Due to technical reasons, we have temporarily removed commenting from our articles. We hope to have this fixed soon. Thank you for your patience. If you are looking to give feedback on our new site, please send it along to feedback@globeandmail.com. If you want to write a letter to the editor, please forward to letters@globeandmail.com.
Comments