An Alberta legislature member who once sat for the United Conservatives is not being allowed back into the party.

On Friday, Derek Fildebrandt was in court in Didsbury, Alta., to face charges that he shot and killed a deer on private property in early November without permission from the landowner.

He pleaded guilty to unlawful possession of wildlife and was fined $3,000.

"From the very beginning, Derek acknowledged that he had made a mistake," said his defence lawyer, Dale Fedorchuk. "They were hunting on Crown land and they had moved positions and he thought he was still on Crown land when he shot the deer.

A charge of entering on to private property was dropped as part of the plea agreement.

United Conservative Leader Jason Kenney said in a statement that Fildebrandt will not be allowed back into the party.

"As elected representatives, we must be expected to show the highest level of integrity," said Kenney. "MLA Derek Fildebrandt has unfortunately demonstrated a pattern of behaviour that does not meet that standard."

In December, Fildebrandt was found guilty in a hit and run. He was found to have hit a vehicle and then failed to notify the owner.

That followed controversies over renting out his taxpayer-subsidized accommodations on Airbnb and double-expensing some meals.

He quit the UCP caucus last summer to sit as an Independent.

Kenney said he and others sat down with Fildebrandt in late November to determine whether there were any other matters that were outstanding.

He said Fildebrandt failed to disclose the wildlife charges during their hour-long conversation.

"I can only conclude that Mr. Fildebrandt deliberately misled us in refusing to disclose this outstanding charge," said Kenney. "Consequently, neither I nor caucus have confidence in the veracity of his undertakings to us." 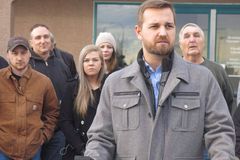