The attack in Edmonton: What we know so far

Abdulahi Hasan Sharif has been charged with attempted murder after allegedly stabbing an officer and injuring four pedestrians in a series of violent incidents. Here's what you need to know

Where the incidents happened

What we know about the suspect

How politicians have responded


Where it happened and what occurred

Around 8:15 p.m. on Saturday, Sept. 30, a white Chevrolet Malibu plowed through a barricade into a police officer who was on duty and directing traffic outside a CFL game between the Edmonton Eskimos and Winnipeg Blue Bombers.

Video footage released by Edmonton police shows the officer being flung through the air after being struck by the vehicle. The driver of the vehicle then got out and began stabbing the officer who had been struck before fleeing the scene on foot.

Hardeep Singh was working at Crown Liquor across the street from the stadium when a customer ran back into the store saying, "Somebody has a knife!" He said he saw a man on top of a police officer trying to stab him.

This first attack prompted a city-wide manhunt in Edmonton. Around two hours later a police officer stopped a U-Haul truck and matched the driver's name with the suspect in the first incident. Police say that the suspect then sped away as officers pursued in patrol cars. The driver then began swerving into pedestrians in downtown Edmonton, injuring four people in the process.

Austin Elgie, manager of The Pint just west of the downtown core, said he was outside when he saw a truck speeding into an alley where people were smoking, and strike a patron of the bar.

The high speed chase ended when the truck overturned on the city's busy Jasper Avenue. No shots were fired but police used a tactical stun grenade and a taser to disable the driver before he was removed through the broken windshield of the U-Haul truck and handcuffed.

Police say that the individual is in custody and acted alone. Edmonton Police Chief Rod Knecht said that an Islamic State flag was found inside of the suspect's vehicle and that police investigating the series of incidents as a terrorist attack.

What we know about the suspect 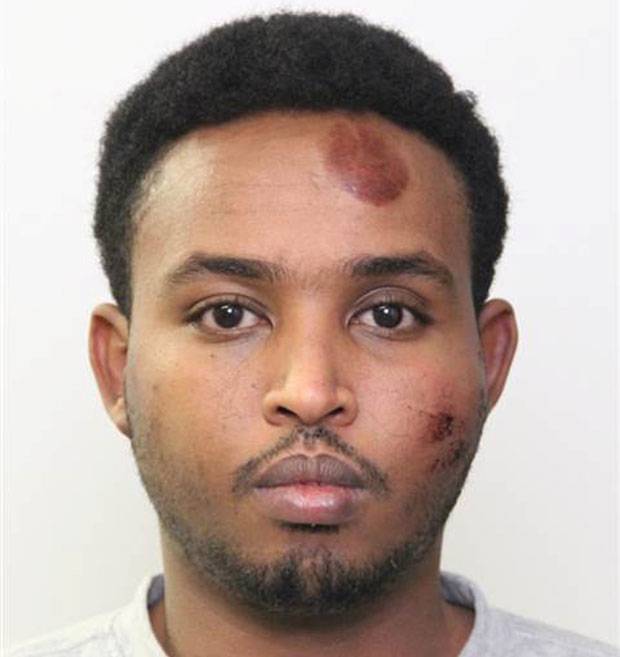 Abdulahi Hasan Sharif, 30, is a Somali refugee. According to Public Safety Minister Ralph Goodale, Mr. Sharif arrived in Canada in 2012 and was granted refugee status, but few other personal details have emerged.

In 2015, an investigation was launched because there were complaints that he was espousing extremist views. At the time, he was deemed not to be a threat to the public and there was insufficient evidence to bring terrorism charges or issue a peace bond, RCMP Assistant Commissioner Marlin Degrand said.

Mr. Sharif is facing 11 charges, including five counts of attempted murder, five of dangerous driving causing bodily harm and one weapons offence. Although police have described the incident as a suspected terrorist act, terrorism charges have not been laid.

Constable Chernyk was released from hospital with cuts to his head and face and scrapes on his arm. Bob Walsh, acting president of the Edmonton Police Association, credited the officer's training and experience for helping him be able to fight back against a sustained knife attack after the trauma of being hit by the car and thrown a large distance. "We are very fortunate that he is alive," Mr. Walsh said.

Of the four people hit by the truck, two had been released from care as of Sunday afternoon, while the other two remained in hospital. One person suffered a fractured skull and was initially in critical condition, but had since been upgraded to stable.

How politicians have responded

Politicians from all levels of government were quick to condemn the attacks and urged residents of Edmonton to support each other. Mr. Trudeau said in a statement that he was "deeply concerned and outraged by this tragedy."

He also said that "we cannot – and will not – let violent extremism take root in our communities. We know that Canada's strength comes from our diversity, and we will not be cowed by those who seek to divide us or promote fear. "

Ms. Notley thanked and acknowledged first responders and by-standers at the scene of the crime in both incidents for their "bravery in moments of fear" and their "compassion in moments of chaos." She also said that extremism in all its forms must be condemned and rooted out."There is no place for terrorism in Alberta," she said. "And we will do everything possible to stop it in its tracks in our home."

A video of my statement regarding last night's suspected terrorist attack in #yeg can be viewed here: https://t.co/BBcvJgZC8e #yeg #ableg

Edmonton Mayor Don Iveson urged residents to support one another and stand united during a difficult period. In a statement he said that he is "shocked and saddened by the attacks" and that "it is vital now that we not succumb to hate, that we not be intimidated by violence, and that we respond with the loving strength of this whole community in support of the victims, and our brave first responders. We will not be divided."

Canadian Muslim leaders also condemned the attack, saying that such actions were un-Islamic. Imam Syed Soharwardy, the founder of Muslims Against Terrorism, said it's important to condemn both terrorism and Islamophobia in the wake of violent overnight attacks in Edmonton.

"This terrorist act in Edmonton proves to us that we have to do more to educate people, both Muslim and non-Muslim, that this is not Islamic," he said Sunday.

Edmonton's Al Rashid Mosque called the incident an attack on "all that we hold dear as Canadians."

"Hateful and indiscriminate violence has no sanctuary in Islam," the mosque said in a statement. "We have and will continue, with our full support, be a partner with police and justice to maintain peace, calm and love in our city. Our community by the tens of thousands are abhorred by the perversion of our religion."

The White House condemned the attack and said that U.S. law enforcement officials are "in touch with their Canadian counterparts to offer assistance with the ongoing investigation."