Extremely poor air quality and raging wildfire are hampering efforts to return residents to Fort McMurray, despite considerable gains in repairing the fire-ravaged northern Alberta city. Meanwhile, fires burning outside the city continued to move quickly north throughout the day, forcing the evacuation of people from work camps in the area late on Monday afternoon.

"It is a dynamic time right now," Alberta Premier Rachel Notley said at an evening briefing about the ongoing wildfire situation on Monday.

Emergency personnel inside Fort McMurray were also taking precautions, and hundreds of firefighters were working in the Timberlea area, as fire burned about five kilometres away from the neighbourhood.

Scott Long, executive director of the Alberta Emergency Management Agency, said he was "fairly confident, fingers crossed, knock on wood" that the fire situation would not escalate in Fort McMurray, but that there was concern about oil and gas infrastructure.

There is currently no timeline for residents to return to Fort McMurray.

Southeast of the city, industrial and provincial firefighters were working to hold back a fire near Enbridge's Cheecham Terminal facility, including by widening existing firebreaks. A statement released by Enbridge on Monday said the terminal and pump station were designed with the possibility of forest fire in mind.

Air quality has emerged as another significant hazard. On Monday morning, the air-quality-health index in Fort McMurray was determined to be 38, nearly four times greater than the level considered to be high risk. The scale usually runs from 1 to 10.

Mr. Long said air quality was hampering some of the work in the area, but that emergency officials are hoping the air will improve when wind and atmospheric conditions change in the days to come.

Speaking on Monday morning, Ms. Notley said electricity has been restored to most of Fort McMurray and the water-treatment plant is working again, though a boil-water order remains in effect. She said the landfill is back in operation, the airport is ready to resume commercial traffic and gas service has been restored to about half the city.

Thirty-two kilometres of fencing, amounting to about 100 truckloads, was expected to be in place around damaged or dangerous areas of the city by Wednesday.

About 400 people continue to clean the hospital, and Ms. Notley said the province is getting advice from health and emergency officials concerning what level of medical service should be in place before people return to the community. She said a facility similar to a "high-tech MASH unit" has been set up in outdoor tents, and there are plans to open the emergency room by the end of the month.

Provincial wildfire manager Chad Morrison said on Monday morning there were still thousands of hot spots in and around Fort McMurray and firefighters are expected to be "seriously challenged" in the next several days. Crews have made progress with more than 60 kilometres of fire breaks, he said, but there is still extreme fire behaviour around the western and northern edges of the blaze, as well as the potential for new starts and lightning fires in the hot, dry and windy conditions.

There are 15 wildfires burning in the province, three of which are considered out of control. One prompted the evacuation of 100 to 200 people from a hamlet northwest of Edmonton.

Size of Fort McMurray fire as of Monday morning: 285,000 hectares

Air quality index inside Fort McMurray, on a scale usually measured from 1 (best) to 10 (worst): 38

Number of houses that have been assessed for damage: 19,280

Numbers of kilometres of fencing obtained to secure damaged and hazardous areas of Fort McMurray: 32

Number of trucks required to transport that fencing to the city: 100

Approximate number of views of online satellite maps showing damage to the city: 70,000

Number of individual people represented by those cards: 58,069

Number of firefighters working on wildfires around the province: 1,919

Number of firefighters working on the Fort McMurray fire: About 1,100

Number of wildfires burning in Alberta: 15

Number still out of control: Three 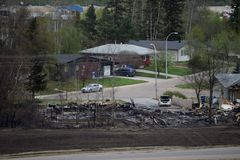 Fort McMurray not safe for residents to re-enter, officials say
May 12, 2016 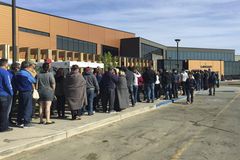 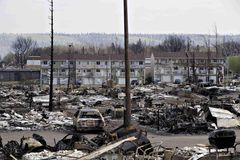