As the night of Wednesday, April 14, 2014, wore on, Susan de Grood's text messages to her son grew exasperated and anguished, pleading for him to talk to her, to come home after work. Matthew de Grood, then a 22-year-old future law student, was supposed to be nearing the end of his shift at a northwest Calgary Safeway store, and his responses to his mother were disjointed, with references to Illuminati, Frankenstein, Pontius Pilate and reincarnation, then reassurances that he was okay. He had left the store early, without telling co-workers.

"Matt, please talk to me. I wanna understand what is going on with you. Please don't stop talking … to me," his mother wrote during the exchange, which extended past midnight into that Thursday. "Come home and talk to me please.

"I really need to see you."

Matthew replied: "You can't come here you will die."

At the start of the trial on Monday into Calgary's worst mass killing, Mr. de Grood pleaded not guilty to five counts of first-degree murder in the deaths of Jordan Segura, 22; Kaiti Perras, 23; Josh Hunter, 23; Zackariah Rathwell, 21; and Lawrence Hong, 27, at a house party.

However, he admitted to killing the party-goers, according to an agreed statement of facts that Crown prosecutor Neil Wiberg read to the court.

Mr. de Grood has undergone extensive psychiatric evaluation to determine if he might meet the criteria of being criminally responsible. Details are expected as the trial, being conducted before a judge but no jury, proceeds.

This account of the rampage, and what led up to it, is pieced together from testimony on Monday as well as witness statements from young men and women who were at the party, police notes before and after Mr. de Grood's arrest, excerpts from text messages between family members and exchanges between the suspect and arresting officers. Five officers and the assistant manager at the Safeway where Mr. de Grood worked testified Monday. The materials and testimony reveal a descent into darkness that family and friends were unable to stop.

To anyone outside the de Grood home early that spring, Matthew seemed poised for success, having graduated from the University of Calgary with a bachelor of science in psychology. He was accepted at law school for later in the year. He enjoyed long-distance running.

Within the family, however, tension had grown. Matthew's father, Doug de Grood, a senior Calgary police official, and his wife discussed feeling powerless as their son had become withdrawn, at times angry, lashing out at any criticism. He had taken to spending much time in his bedroom, posting on his Facebook profile ramblings on radical politics and conspiracy theories. His parents even discussed a "mental-health warrant" but decided against it, saying it was unlikely he met the criteria.

On the night of the stabbings, Doug de Grood told his wife to call 911, fearing Matthew was suicidal. Doug went out to search for him and found his truck at the Safeway where his son worked. Doug told a fellow police officer in the area he was looking for his son. Early the next morning, he was told his son had been involved in a serious incident and that the young man may have been responsible.

After midnight, a rented home near the university became a scene of chaos and carnage. Blood stained the interior of the house, some pools smeared by rushing footprints, and blood trails extending beyond the yard.

Brendan McCabe had invited Matthew to his party to mark the end of the university semester. When the two met up, Mr. de Grood, still dressed in his produce-department uniform, gave Mr. McCabe a clove of garlic, saying he "may need it." He also handed over a kitchen knife, according to a police interview with Mr. McCabe.

During the walk to the party, Mr. de Grood spoke nonsensically, according to Mr. McCabe's statements. He compared his state of mind to patterns in the Matrix movies. He said that U.S. President Barack Obama was the Antichrist and talked about hidden meanings in heavy-metal lyrics. He asked Mr. McCabe if he could stay at the house he shared with four roommates for a few days.

Party-goers at 11 Butler Crescent NW at times numbered as many as 25. Witnesses said Mr. de Grood made guests uncomfortable, wearing his jacket zipped up to his neck, and latex gloves, leading one party-goer to wonder if he was a germaphobe. According to the statements, Mr. de Grood had a box cutter.

At around 12:45 a.m., with other guests around a campfire in the backyard, he put his cellphone on the blade of an axe, and dropped it into the flames. According to witnesses, when someone pulled it out of the fire, Mr. de Grood smashed it with the axe.

Six years earlier, in Grade 11, Mr. de Grood had developed a drug problem, using heavy narcotics including cocaine and ecstasy. He listened to a steady rotation of heavy-metal music. Alarmed, his parents put him in counselling, which helped Mr. de Grood kick his habit. Eventually, his musical tastes changed and he went back to being, as his sister described, "the fun-loving, happy person" she knew.

In the weeks leading up to the attacks, however, antisocial behaviour returned. An exchange of iPhone chat messages a week before the attacks display tension between Susan and Matthew de Grood. They suggest a heated argument in which Matthew had lashed out and placed blame for negative aspects of his life at the feet of his parents. In the exchange, Matthew suggested his father treated his sister preferentially, and had threatened to force him out of the house.

Teri Lewis, who lived at the house where the party was held, described the mood at the gathering as light and happy before she went to her room to turn in. She was awakened not long after by yelling and screaming outside her door. Mr. McCabe was frantic. "Hey Matt, it's OK, calm down, it's OK. Dude, it's OK, calm down," Ms. Lewis quoted Mr. McCabe as saying. The panic continued for two or three minutes. She locked her door and called 911. It sounded like someone had a knife, she told the operator, but she had not looked out.

When the house quieted down, Ms. Lewis left her room and saw two bodies on the floor covered in blood. One was another of her roommates, Mr. Segura, and the other she did not recognize. Neither was moving.

One group of four friends had left the house earlier to get a snack and they returned at around 1 a.m. They heard screaming from inside the house. Two people ran out the front door, apparently one chasing the other. Some guests locked themselves in a car, others called 911. At least one was frantically using CPR to try to revive a person who had collapsed on the front lawn.

Later, police said a knife from the kitchen of the house was used in the attacks.

After the chaos, Mr. de Grood took off down the street on foot. His friend, Mr. McCabe, caught up with him. They struggled. Mr. McCabe grabbed the knife used in the stabbings, before Matthew produced another blade, warned him to stay away and fled again.

Police hunted him down in the neighbourhood and he was bitten by a police dog, but did not appear to react to the severe bite. He tried to punch an officer, missed and then was apprehended at gunpoint. Police found a small package of garlic in the suspect's sock. Mr. de Grood explained he was trying to keep zombies away, and said, "I'm sorry. I had to kill them."

In the ambulance after his arrest, Mr. de Grood's statements were again seemingly random, involving the attack, arrest, his family and nonsensical references to Satan, Darth Vader, Charles Manson and stigmata. Emergency-room doctors noted in the admission certificate that "he was 'psychotic' and had 'no insight into illness,' " the agreed statement of facts reads. The officer who accompanied him told him that he faced five counts of murder. A detective told Mr. de Grood he received a message through a colleague asking the accused to call lawyer Allan Fay. The message, the detective believed, first came from Mr. de Grood's dad.

The accused attended the trial Monday, wearing glasses, a white dress shirt and dark jacket. He often looked at the floor when witnesses quoted his statements from the night of the attacks.

Just before the proceedings began on Monday, Gregg Perras, father of Kaiti, read a statement from the victims' families describing their anguish in the wake of the crimes that ended the lives of five young adults on the paths to their chosen careers. "The grieving and memories never end for any of us," Mr. Perras said. "There is no such as thing as a new normal that some people talk about."

One year later, university looked for strength
May 14, 2018 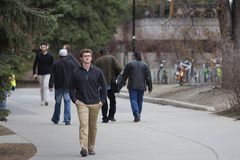 Court rules that Calgary man charged in stabbing deaths will stand trial
May 12, 2018 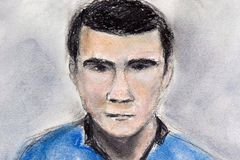 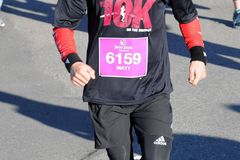 Follow Jeffrey Jones and Carrie Tait on Twitter @the_Jeff_Jones @CarrieTait
Report an error Editorial code of conduct
Due to technical reasons, we have temporarily removed commenting from our articles. We hope to have this fixed soon. Thank you for your patience. If you are looking to give feedback on our new site, please send it along to feedback@globeandmail.com. If you want to write a letter to the editor, please forward to letters@globeandmail.com.
Comments are closed