University of Saskatchewan hydrologist John Pomeroy speaks about Global Water Futures: Solutions to Water Threats in an Era of Global Change. The university-led research initiative launched this week with $77.8-million in funding from Ottawa.

Mr. Pomeroy is associate director of the new program, which aims to harness big data to forecast and mitigate water-related threats such as the devastating flood that hit Calgary in 2013.

How did the flood shape this initiative?

I actually live in Canmore. I spend most of my time out in the mountains there conducting field research in Kananaskis, in the national parks and on the glaciers.

There were test products in Europe that were able to suggest a large flood would hit Calgary on the right day, that were producing those results two weeks before the event hit, and so these predictive tools exist but they weren't being deployed in Canada.

Flood forecasting is left up to the provinces and Alberta has one of the best services across the country, but the competition is the whole U.S. government, which does it at a national level.

We want to develop better computer models and products and get these systems up and work with the provinces and the federal government to make that information available so they can bring it into the disaster-warning systems.

Why is Canada so far behind?

It's changed over time. I'd say in the seventies and eighties we were way ahead on many of these things, with water quality and acid rain and water in general. We were seen as one of the best in the world. There hasn't been as much investment in it over the recent decades and this funding changes that. It reverses that direction completely.

The other [factor] is that when things are okay in Canada we take water for granted a little bit. A large part of the population lives in the Great Lakes. They don't have water shortages. Even if they have a drought in Southern Ontario, the lakes are nearby.

What role does climate change play?

It's what is driving the big changes that we're seeing right now. Some of them are human-caused locally, due to industry or oil spills in the North Saskatchewan River, things like that. But climate change is the big one.

In the mountains, the headwaters above Calgary, we've seen warming in the winter of about 5 degrees for winter minimum temperatures, the daily lows, since the early 1960s. So it's really high. In fact, it's magnified at high altitudes in the mountains, just like it is in the polar regions.

We've been losing ice off the Athabasca glacier melting downwards at two metres per month this summer, which is incredibly high. And the last few years have seen record amounts of glacial melt all over. The numbers this year aren't in yet, but it looks like another bad one.

How will Global Water Futures help?

Take the city of Calgary. How much water will be available in the Bow River in 60 to 80 years? What will be incidence of flooding and low flows at that time? Those are questions that are really important for the growth of the city.

We're going to pay particular attention to source drinking water qualities for First Nations, which is a serious problem in this country.

And then also look at allocation. If we go through dry periods that are more severe than the droughts we've experienced so far, how do we deal with that in Western Canada? Do we have enough water for irrigation, and for our hydroelectricity and for our cities, or do we have to start making very difficult choices? 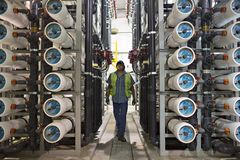 Why thousands come for the healing waters of Lac Ste. Anne
July 30, 2015 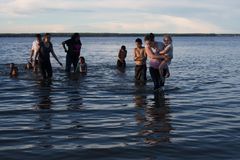